Hitler, Ray Comfort, and the Dismal State of Discussion

I did something bad for my health that I do not recommend. I watched “180”, a half-hour documentary made by Ray Comfort. 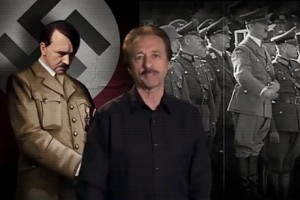 It is a bastardization of discourse from all sides. In an interview with Steve, a neo-Nazi punk type of young man, Steve says that he’s certain of his opinions about the falsehood of the Holocaust and other offensive things. To combat this, Comfort asks Steve to spell shop (Steve does) and then asks: “what do you do at a green light?” The question is a trick to get the mind to quickly respond “stop”, which is semi-associated with green lights and rhymes with “shop”, and the person answering looks silly. Sure enough, Steve responded “Stop” and looked silly. And then – well, then Comfort treated that like an actual argument for something.

The documentary was dipped in dramatic music, photos of piles of dead bodies, and use of gratuitously violent photographs. What is most interesting to me, however, is the use of what seems to be the universal argument-ender: comparisons of things to Hitler.

Hitler, the Nazis, and Lazy Discussion
Hitler and the Holocaust have become mythic elements of American culture, I think, and to the detriment of the truth of the actual historical events. I was recently visiting a small church where the members, after the service, started (sort of randomly) to wax poetic about the horrors of Hitler and the Nazis. They weren’t saying anything new – everyone was just affirming that Hitler was inhuman and the Nazis were too. It was the fervent insistence that “real humans could never do that sort of thing” that struck me – I thought of all of the other genocides and massacres of the past century alone, of the killing of civilians in wars by troops of every nationality, of atomic bombs. But even in light of all of these things, current conversation about Hitler seems to serve contrast to our new, very human, very un-barbaric society. We talk about Hitler basically like Satan – an ultimate evil; a rhetorical catch-all.

Comfort’s specific use of the Hitler argument is reductive and tired. It is, if anything, an exploration of how charged and empty rhetoric in the realm of politics is being mirrored in general culture. His interviewees are inconsistent, and seem to know very little about philosophy, theology, or basic logic. Comfort’s questions are also always precisely and pseudo-cleverly leading, and it doesn’t seem that he wants to engage with the interviewees at all: “Does this mean you’ve changed your mind about abortion?”, he asks. “Are you going to vote differently in the future?” It is not a conversation, is the point: it is a poorly executed set of rhetorical acrobatics. Is this the way to foster discourse and an informed public? Probably not. Arguments depending on rhetorical cleverness are insulting to both parties.

Comfort’s series of interviews are not only annoyingly inconsistent and poorly constructed, however: the movie is also a manipulative presentation of complex issues and events, presented crassly and with a smugly triumphant attitude. One of the less graceful moments was when Comfort asked a woman if she’d had an abortion; she said that she had. He then immediately asked: “Do you feel guilty about it?”

As the big finish, Comfort sets up a game-show setup of moral responsibility and the afterlife, and awkwards them into admissions of fright and death anxiety:

Theologically, morally, rhetorically, and logically, this is one of the most horrible things ever. Comfort’s quick-talking way of “tricking” people into professing a fright of punishment does very little for the moral health of humanity or the search for truth within rhetoric and theology. The triumphant music and photos of bloody sheets are no help for the legitimacy of the movie.

There are also 40 thousand comments. I do not recommend those either. They are not a happy picture of humanity.

It makes sense to protest the legalization of abortion and to be horrified at the amount of deaths occurring if one believes that life begins before birth. Comfort’s smugness and “gotcha” questions, however, lack earnestness, humility. The whole thing turns a serious situation into an awkward and unproductive onslaught of unhelpful rhetorical inconsistencies, devoid of integrity and, therefore, real efficacy.

In sum, the movie is a disjointed account of unproductive discussions with unproductive people with vague and uninformed opinions. It’s a disheartening representation of the state of discourse on American sidewalks.

5 responses to “Hitler, Ray Comfort, and the Dismal State of Discussion”