Florida, one of the crazier states in the Union, has taken climate change denial to a whole new level.

Apparently, Florida’s Governor Rick Scott is responsible for an off-the-books ban on the terms “climate change” and “global warming” (among others) at the state’s Department of Environmental Protection (DEP).

I mentioned “others” because, according to some, DEP employees have also been pressured to avoid using the term “sustainability.”

That’s the last I’ll say about that one, because, if it’s true, the stupidity of it could very well give me a brain aneurysm.

Anyway, it seems that Florida officials have tried to keep this policy under wraps by only enforcing the ban verbally, but enough frustrated state employees have come forward to make the existence of this “policy” pretty clear.  Still, officials deny the existence of the ban, and, without outright proclaiming the existence of climate change, they’re still adamantly denying that they’re denying it.

Now, in that last link, Governor Scott lists a number of environmental gains made by his state in the last few years, citing that as evidence that they’re on the right track.  They’re into “solutions.”

But they’re not into solutions.  Not any more than the guy who tapes an air freshener to his trash can rather than taking out the stinking garbage.  No, Florida is into treating symptoms rather than causes (for really stupid reasons, too).  Take, for example, the report on sea level rise (a major issue that is part of a, well, global trend) where the problem could only be referred to as “nuisance flooding.”

I’ve wanted to use this one for a while.

That last example frames one of the biggest issues with this policy perfectly.  Florida hasn’t just banned a few words–they’ve banned the critical context for any and all of their policies, both environmental and otherwise.

“Climate Change” is more than just a buzz word or a political lobbying point.  It’s the label that we’ve placed on a planet-wide trend that influences everything that happens around us.  What happens in China, or The UK, or South Africa, or Miami, FL is intricately tied into what’s going on anywhere else.  It’s all feeding into global change, and if we don’t factor that change into our decision-making processes, our decisions aren’t going to be informed.

Governor Scott describes himself as “a businessman.” Alright.  Let’s look at this in business terms.  Specifically, the flower industry, something Kat addressed recently.  Every year, people in that industry know that February 14 is coming, and they plan accordingly.  They adjust their stock for the influx of requests for roses (taking a colossal dump on Colombian field workers, but anyway).  Some sad, lonely flower shop owner can insist that February 14 is “Single’s Awareness Day” all he wants, but he will sink or swim based on whether or not he responds to the very real market pressure that exists outside of his state of denial.

So it is with environmental policy, city planning, etc. in the context of climate change.  Sure, you can make plans for some “nuisance flooding.”  But those plans aren’t going to be effective for progressive, systemic increases in flooding.  No, that’s what responses to “sea level rise” are geared toward.  And that’s exactly what Florida is facing.

Some 2.4 million people in Florida live within 4 feet of the high tide line.  Scientists predict that, with the influence of climate change, we’ll be seeing widespread storm surges that’ll top off current high tide levels by five feet by 2050.  Lives are at stake here, and on a very short time frame.  “Nuisance flooding” my ass. 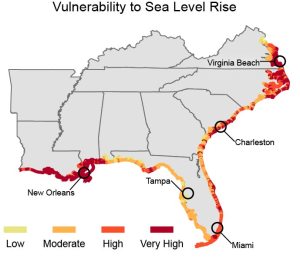 And sure, Florida’s DEP doesn’t necessarily need to call a spade a spade in order to make a difference.  They can pay lip-service to the denial of their superiors while actually addressing the problems.  But it’s an unnecessary barrier to effective communication, as well as individual comprehension.

Now, I don’t want to be “that guy,” but this whole thing reminds me of George Orwell’s 1984 (actually, Evan pointed this out, so he gets to be “that guy”).  It’s very Ministry of Truth/Newspeak-ey.  By breaking down the vocabulary we have in place to address these concepts, Florida’s elected officials are chipping away at the DEP’s ability to engage with them.  Now, fortunately, there are limits to their authority on this.  If you’re a Florida resident, you can still shout “climate change” at the top of your lungs, and nobody’s going to stop you.  Nobody’s wiping it from the history books.  BUT, they ARE slowing us down in our attempts to respond to a threat that’s already upon us, and if B.S. like this continues, there’ll be millions of Floridians who never make it long enough to read those history books.