It All Starts With Comics, As Usual

Last Wednesday, in Action Comics #21, a little something happened between Lois and Clark. And to cut you off before you make any natural assumptions, Superman is actually dating Wonder Woman in the present continuity. Anyway, I’ll let the panels speak for themselves:

And Then Comes The Controversy…

The title is currently being written by Tony Daniel, and what happened was that a reader actually began a Twitter conversation with him that started with the following exchange:

Now before I go on, I need to state that I cannot link to these actual tweets, as much as I would like to. As far as I can tell, Daniel’s Twitter account has been deactivated, likely due to the flak he received from over the above panels.

The man who started the conversation is Alton [his last name’s a mystery to me] and wrote about the back and forth in a post on his tumblr. You can click that link to read more, but I’m just going to embed a few more back and forths so that you can get the big picture:

Anyway, long story short, Daniel blocks Alton. Soon afterwards, as I mentioned, his Twitter account appears to have been taken down. Now I’m not here to harp on a comic book writer’s response to criticism [there have been worse instances], what I want to do is explore the idea of. . .

The Misogyny Behind the “Friend Zone”

I talked to a good number of girls before writing this, and arrived at the conclusion that the “friend zone” is used almost exclusively by guys. None of those I questioned could recall hearing their female friends ever use the term. Urban Dictionary would appear to back this up, featuring the expression as their Urban Word of the Day for October 18, 2011. Their definition:

What you attain after you fail to impress a woman you’re attracted to. Usually initiated by the woman saying, “You’re such a good friend”. Usually associated with long days of suffering and watching your love interest hop from one bad relationship to another. Verb tense is “Friend-ed”.

So we’ve established that, at least to a majority of people, the term “friend zone” is gendered, specifically to males. Now that we have some confidence that this is primarily used by men we can move into how it’s viewed as misogyny.

The source I turned to in understanding the hatred of women behind these words was a blog called The Vagenda, and the very simply titled “The Friend Zone.” Written using “anecdotal evidence and fifteen minutes on Facebook” I was pretty confident I’d get what I was looking for. [I am not being sarcastic.] Their motivations for being down on the term can be summed up in the following two reasons:

If a man acts like he wants to be my friend, I have enough respect for the male species that I’m going to assume there’s no ulterior motive. If he’s secretly in love with me, I expect him to have the balls to tell me. And you know, even if he does, I STILL might not sleep with him.

Which basically boils down to “I don’t have to have sex with you just because you’re nice to me,” and-

its total offensive nature in equal parts to men and to women. It sends the message that everything men do is just a secret cunning ploy to get laid – and that if you can’t have sex with a woman, she isn’t worth spending time with. It’s taking the two most oversimplified sexist attitudes from each side of the divide, tying them up in a pretty package and then complaining when we recognise it for the dog turd it actually is.

The point being that it is founded on the assumption that all guys want is sex, which demeans them, and that all women are good for is sex, which is clearly a horrible thing to believe.

Where I’m Coming From

I think there are three differences in how I view the term versus how the very broad “everyone else” does:

1. Sex Doesn’t Have Anything To Do With It

I mean, it can, but as a person who’s decided to abstain from any kind of sexual activity prior to marriage I typically view dating relationships without that added factor. The writers over at The Vagenda view the hurt parties cursing the “friend zone” as bemoaning a person’s sexual advances being rebuffed, while I’ve always just seen it as feelings going unrequited.

2. Gender Doesn’t Have Anything To Do With It

I’ve never seen this as being a gender-exclusive term. Sure, I’ve known plenty of guys who have become close to girls who never like-liked them back, but I’ve seen the same thing happen to a few girls as well. While they may not have said they were “in the friend zone” or “friendzoned,” I may well have to describe their situation.

3. Fault Doesn’t Have Anything To Do With It

I don’t think anyone is really at fault. Okay, that’s not totally true. I think that, excuse me for being heteronormative for a sec, men generally have the onus when it comes to making their feelings known. See Figure A., below. 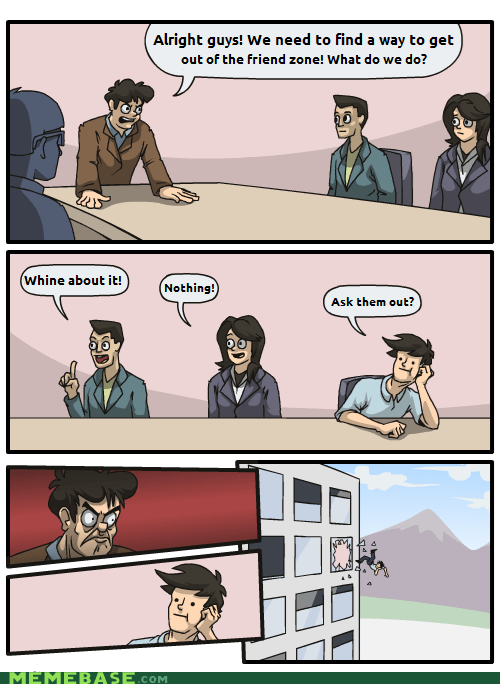 If the guy makes his feelings known and the girl doesn’t reciprocate that is not her fault. She can feel how she wants to feel, and she does not owe this dude anything. I mean, as his friend she should maybe feel sorry for him, but that is it.

This seems like it should be an obvious thing, but apparently it isn’t. I don’t blame a person for placing someone in the “friend zone” because that is their prerogative, just as it is to take them out of there. I mean, it’s not some eternal limbo.

Whereas I view the term “friend zone” as simply one person’s romantic feelings not being returned due to them being viewed solely as a friend, I realize that is by no means a definition everyone [or even anyone] else holds to. The issue is that there are connotations, three of which I listed above.

In other words, it’s never just that a guy wants to date a girl, it’s that he wants to get into her pants as well. Following up with that, her refusal to date him paints her as the bad guy, which is, frankly, just terrible. I’m not going to go into the messy world of people leading each other on except to say that both genders have been more than just a little guilty of this.

The fact is that a lot of guys use the “friend zone” as a reason to stand strong in solidarity with their brothers. Refer to Figure B. for a great example.

And you know what? I do feel kind of sad for this guy, and that’s okay. I don’t think that’s something that I should be ashamed of. On that same note, I also don’t think that this needs to turn into a sobfest or a pity party. Yeah, this guy’s clear act of romantic interest was severely misinterpreted, but he either needs to try again or move on. I mean, really.

I still don’t personally view “friend zone” as being misogynistic, even after reading up on it and talking to people who believe it is, but that doesn’t mean that it’s not used that way countless times a day. I also won’t push my definition on you, since I know you don’t just shake connotations from a phrase after reading a blog post some kid wrote. My hope is that through sharing these views on this subject I can help you to maybe think how you’re going to use these words if and when you do, and what you mean by them.

12 responses to “Mapping the Friend Zone”