Plastic. I really hate it. I really didn’t realize how much I hated plastic until I went to Niger and saw this.

There were several mini-dumps like this in neighbourhoods near where I lived.

Whats the dump in the image above full of? Plastic bags. And what is that haze? Ohhhh smoke, from them burning. That’s probably not bad for you at all, eh?

Not to mention I could walk out my front door to see goats eating the bags outside our house.

And you should know by now I love me some goats.

After discovering my newfound hate affair with plastic I decided to watch a documentary I’d been hearing about for some time called “Addicted to Plastic.”

The thing I found most interesting about this film is that it argued that plastic never really does break down. It disintegrates, yes, but the pieces it disintegrated into, microscopic plastic pellets, those remain the same. So what does it mean when much of our plastic is migrating into the ocean? Well, it means that the goats aren’t the only ones eating plastic.

We’ve all seen the type of anti-plastic photos that are floating around the internet. The fish, birds and turtles after they’ve munched on one too many balloons or chunks of lawn chair. 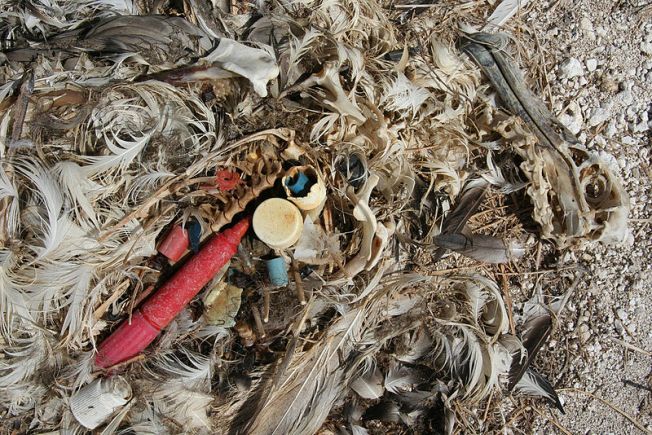 Honestly, I’m not even an animal person, so as sad as these pictures are they aren’t the part that really scares me.

In pretty much the only science-ish class I took in university I learned this fancy term called biomagnification, which is “the process by which the concentration of toxic substances increases in each successive link in the food chain.”

This photo shows the biomagnification of DDT. Notice that it’s not only fish-eating birds that eat the larger fish, we eat those too. So we would be taking in the same concentration of chemicals as other species at the top of the food chain.

While DDT (dichloro-diphenyl-trichloroethane) the example shown above, is a pesticide and not a pollutant released by plastic bags directly, it’s been argued that biomagnification can happen with plastic particles as well. “A study from 2010 in… part of the North Pacific demonstrated that 35% of planktivorous fish in the area had pieces of plastic in their bodies.” Remember where plankton are on our biomagnification chart above? Right. So if 35% of plankton have been munching on plastic and a small fish comes a long and eats a whole bunch of plankton then that small fish is bound to have some plastic in its system. Then, once a bigger commercial fish comes along (the kind we eat) and gobbles up a bunch of small fish who have been eating plasticky plankton.. well, I think the chances are we are ingesting plastic too.

Not to mention plastic is known to “absorb hydrophobic pollutants” too, so we are probably taking in a few of those on the side as well.

So what do we do about it?

I mean, we all know it isn’t enough just to switch to cloth bags for our groceries. Because quite frankly, a lot of the plastics in our landfills are chunks of hard plastic anyways, not just plastic bags.

I personally think the answer is in finding a value for our waste. People are far less willing to part with something that might have some value.

Maybe having the trash right out in the open is what has inspired entrepreneurs and NGO’s in several African countries to find a use for it. While countries like Canada and the States are notorious for just burying our trash somewhere and hoping no one will notice, more and more countries in Africa are finding uses for the plastic that at once point was lining the roadside.

In Ghana, the producers of Trashy Bags collect discarded bags that were used to hold water and ice cream treats. They then wash them and sew them into products that range from purses and totes to kindle covers and pencil cases.

In Nigeria the Development Association for Renewable Energy recently built their first pop bottle house. The bottles, which are filled with sand and used like bricks, are heavy insulation against both the heat and, as it turns out, bullets.

And back in Niger, Architectural group Basumara recently helped to build a playground out of all up-cycled material, including plastic water containers.

The problem with these wonderfully creative solutions is that plastic will still leach chemical contaminants into the surrounding environment.

Some individuals, like Akinori Ito CEO of Japanese company Blest, are trying to find ways to get rid of plastic material rather than up-cycling it, by converting it back into oil.

Think of the time you went to the gym and forgot your water bottle at home. Did go through your workout feeling parched, or buy a water bottle? Or the time you wanted to buy yogurt or cottage cheese, or even regular cheese for that matter. There simple isn’t the option to get it plastic-free.

So shame on plastic. And shame on me and you for our dependence on it. And shame on the way plastic has slowly infiltrated every area of our life, making it pretty well impossible to avoid.

Let’s hope someday we can replace it with a better “magic material.”