The Problem With Cute

A few years ago I took a fantastic Political Science course at my local community college.

Unfortunately, Señor Chang did not go to my college.

Last week I tried to use some of my research from that paper to cover a topic Gordon introduced in a previous post, how advertising can be just as damaging as pornography, but I quickly realized there was far too much information for just one post. That’s why today I’m going to continue with the topic of sexualization in advertising.

In The Problem With Pink I primarily focused on how young girls are being sexualized through advertising.

This is probably the most famous picture in the campaign against sexualizing children in advertising.

But the issue of sexualization in advertising doesn’t just stop with little girls. It extends into womanhood as well.

Lisa Wade of Jezebel argues that there are two sides to this problem of innocent sexiness. While the sexualization of young girls in media/advertising is perhaps a more eye-casting representation of this problem, the infantilization of women is a far more common, though less noticeable way for the problem to manifest:

In her article that I linked to above, “Behind the Cultural Imperative for Women to be Sexy and Cute,” Wade explains that:

“The sexualization of girls and the infantilization of adult women are two sides of the same coin. They both tell us that we should find youth, inexperience, and naivete sexy in women, but not in men. This reinforces a power and status difference between men and women, where vulnerability, weakness, and dependency and their opposites are gendered traits: desirable in one sex but not the other.”

While little girls are told they need to appear sexy, older women are told we need be cute. But it’s more than that. Grown women are expected to embody the innocence of childhood through their expression of sexuality. As Gerard Butler explains to Katherine Heigl in The Ugly Truth, women need to accept this image of “sexy innocence” if they want to win a man. When playing the game of hard-to-get a woman needs to embody a saint, but let the man reveal her inner sinner.

Even when women are not represented as cute, they are generally still presented as vulnerable. One way this is done is by framing women in a way that they appear to be dominated. This can be quite blatant, as we saw in D&G’s infamous “gang bang” ad:

Or it can be a lot more devious.

In her “Killing Us Softly” video Jean Kilbourne discusses how objectification and dismemberment of the female body is constantly used in advertising to sell products. These representations then give the audience a sense of power over the individual they are viewing.

Kilbourne then goes on to discuss how dehumanizing an individual, which can be done both by presenting a person as an object (objectification) or as only a body part with value (dismemberment), is the first step towards rationalizing violence towards that person.

Now I’m not saying that advertising directly causes sexual violence towards women. That’s been happening long before advertising started to dominate our world. But I do believe that this style of advertising does feed into rape culture, the same way sexual violence becomes normalized in media, a concept Evan touched on in his article on Rick Ross, as well as several other posts.

When a woman’s body is a) always presented as open for male viewing and b) framed in a way that makes a woman seem coy, or aloof, it encourages men to believe that women in real life a) should be openly viewed and b) will play aloof or naive about their sexuality until a man “shows them what they really want.”

Sorry about the small image. I assume the company must have tried to remove all the larger images after the stir their ad caused all over the internet.

This message, though it is rarely seen in such a blatant way, is exemplified by the Fetish Perfume ad which reads “Apply generously to your neck so he can smell the scent as you shake your head ‘no.’” The tag line, perfume name, and model’s eye-make (which I can’t help but think looks like she is recovering from a couple black eyes) seems to imply that the model enjoys sexual coercion.

How it Affects Women

In her article Why I Never Play Hard to Get Rachael Kay Albers discusses the problem with the expectation that women must to be coerced into sex [emphasis not added]:

“All my life, I’ve been told that the best way to win a man’s Yes is to tell him No. Popular wisdom warns that a woman who veers from these guidelines is sure to meet a lonely doom, remembered only as “that desperate, clingy psycho….”

She goes on to explain that she could never abide by the rules of playing “hard to get” as it always felt dishonest and manipulative, but that her honesty sometimes landed her in dangerous situations because the men around her still suspected she was playing coy:

“Despite my adherence to the honesty policy, the dudes I dated still had trouble discerning my Nos from my Come On, Convince Mes. And the lines they crossed in theirs quests for Yes were darker because of it. When I turned to my friends, they repeated back the same advice as before, only slightly scrambled: “Well, what did you do to make him think you wanted it?” 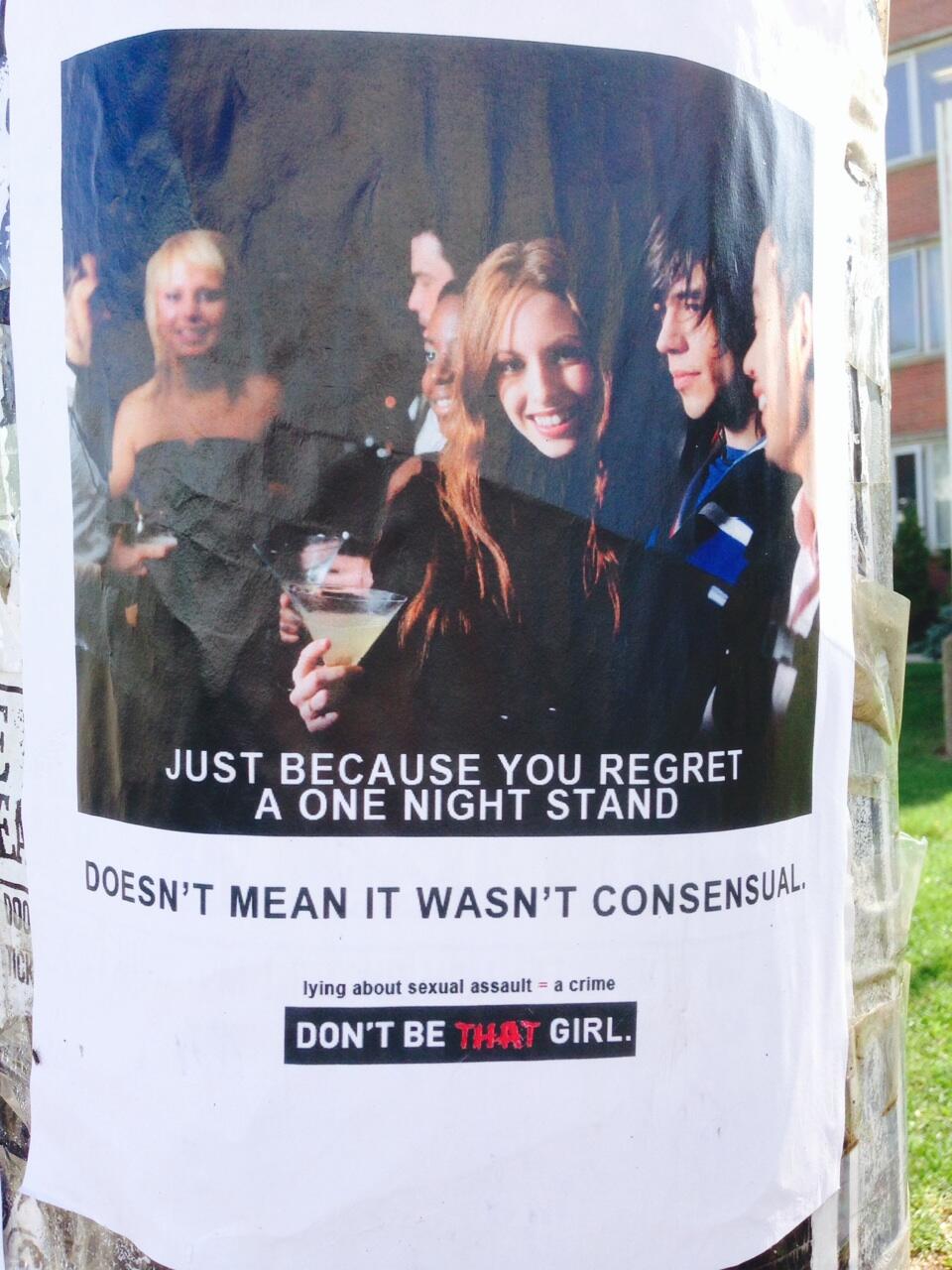 The “don’t be that girl” poster via the Men’s Rights Association in Edmonton, Alberta demonstrates that victim blaming isn’t as uncommon as we think.

A recent survey by the Canadian Women’s Foundation confirms that Albers is not alone in her darker dating experiences. It presents chilling data on how men, particularly college-aged men, view sexual coercion. The survey found that “19 per cent of the respondents believe that women may provoke or encourage sexual assault when they are drunk. Of these, nearly one-quarter (23 per cent) were people between 18 and 34 years old.”  In addition to views on alcohol consumption, the survey revealed that “15 per cent of Canadians believe women can encourage or provoke sexual assault by flirting with a man (20 per cent for age 18-34) and 11 per cent think women can encourage or provoke sexual assault when they wear short skirts (17 per cent for age 18-34).”

In fact, you can find entire webpages that view a short skirt as a form of consent. Just one example is, of course, the Upskirt Tumblr page, a website dedicated to sharing photos taken up women’s skirts. To all appearances these are unsuspecting women who were wearing a skirt in public and became accidentally exposed, and have now been unknowingly plastered all over the internet.

The Problem With Cute

My problem with the “cute” women we see in advertising and media it that it sends the wrong message to men, and, unfortunately, some men are falling for it. Framing women as cute, innocent, or naive reinforces a power imbalance between genders that physically already exists (generally speaking). If a man can convince himself that a woman’s naivety and innocence prevents her from fully understanding her sexuality he can better rationalize pushing her beyond her initial “no” in a sexual encounter.

I’m not saying that advertisers create rape culture in and of themselves, but I do believe that being constantly bombarded with images of women that seem to enjoy being dominated, or scenarios where innocence is just a game of hard-to-get, will affect the way men expect women to interact.

And it’s time to stop. We have seen campaigns everywhere that have been helping to stigmatize victim blaming and rape culture in general. People are done with ignoring gender violence and want to track down the root of the problem. Yet somehow advertisers still think that it’s okay to use women’s bodies and their sexuality as a sales gimmick.

It’s time for them to learn that “no” is not a word that they get to just ignore.

8 responses to “The Problem With Cute”