Apparently I should really start watching the Grammys, primarily because they are THE place to find shameful behavior, or at least that’s what I’ve been hearing from the variety of subcultures that I belong to and/or gather interesting information/perspectives from. So for today I will be shaming three different aspects of the Grammy Awards show:

I’ve been reading various blogs and articles on Beyonce’s since she released her visual album as a big surprise to fans. In news that was a little less surprising, it was an instant best seller.

All over the internet, however, feminists were having a heyday trying to figure out if they could really consider Beyonce a feminist.

Some bloggers brought up how white feminists were all too quick to dismiss Beyonce because, having a husband, she doesn’t fit the image of the independent woman idealized by white feminists. For many young black women Beyonce’s success, not just as a performer, but as a business woman has been inspiring. Not to mention that she featured this clip from Nigerian Feminist Chimamanda Ngozi Adichie in “***Flawless”, which contributed to making Adichie’s Ted Talk go Viral.

She also recently wrote an essay about how “Gender Equality is a Myth!“.

Unfortunately, in the song “Drunk in Love” featuring her husband, Jay-Z, Beyonce sings along while he raps the lines “”I’m Ike Turner, turn up/Baby know I don’t play/Now eat the cake, Anna Mae.” Since she performed this song with Jay-Z at the Grammys, the debate has been reopened and this problematic line has come back into the spotlight.

Those lyrics refer to this scene of domestic violence in What’s Love Got to Do with It, a movie based on the life of Tina Turner.

The main kind of question people have been asking is, “How can Beyonce be a feminist and let her husband include a line like that?” And that’s been kind of ticking me off. Not because I don’t believe that it isn’t cool. It’s terrible that by promoting that scene in the movie one of the world’s most influential couples have been downplaying the horrors of domestic violence. In fact, I am loving that some radio stations are actually cutting those lines out of that song when it’s played on the radio.

What has really been ticking me off is the way that this entire debate between feminists has revolved around Beyonce.

Is nobody actually bothered by the fact that Jay-Z is singing it, and only bothered that Beyonce joins in? There he is, singing about how an abusive husband used to beat up his wife because he was jealous of her fame in a song starring his incredibly famous and popular wife. Is it just ironic? Or is it actually straight up disconcerting?

So yes, I’m ticked at Beyonce, but more than that I am ticked at Jay-Z.

I love Same Love. In fact, let’s include it in here so you can have some music going while you continue reading.

That being said, I’ve been reading some responses by queer and/or black individuals pointing out how Macklemore is neither gay nor black, yet he is benefiting from an association with both communities. In his blog for Huffington Post, for example, Jay Dodd points out that “not one black artist had a number one single this year, and even more surprising, the top of normally black-dominated charts were white artists.” Apparently, even Macklemore agreed that he shouldn’t have been the one to win best rap album at the Grammys.

Dodd also points out that “While homophobic lyrics are pervasive in Hip Hop, they have never been more homophobic or heteronormative than any rock or pop song. Secondly, if 87 percent of YouTube users are White and 54 percent male, it’s guys who look like you and listen to rap like you do, who perpetuate that narrative of hateful Hip Hop?” 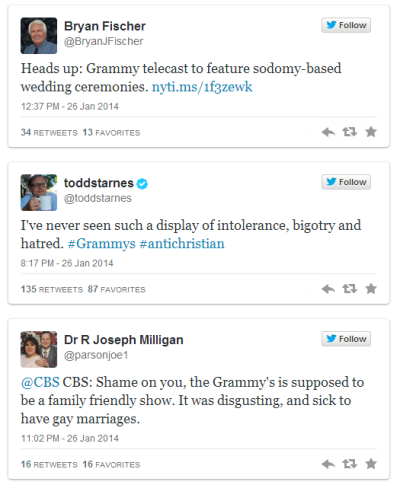 And you may have noticed various Christian friends congratulating Christian singer Natalie Grant for walking out of the Grammys.

As a Christian and someone with loved ones who are gay this is probably the most depressing backlash to the Grammys I’ve read about. As I mentioned in my past post on Duck Dynasty, I understand having the personal conviction that it is wrong to be gay. Or having the personal conviction that you shouldn’t have sex before marriage. That’s our right as people of faith, to act out our beliefs insofar as they don’t harm other people. So why is the Christian community scandalized every time someone happens to be gay around us? I mean, you never see Christians getting up-in-arms about allusions to pre-marital sex at the Grammys.

To me, many of these responses to homosexuality seem like fear mongering, and as we know from 2 Timothy 1:7, “God did not give us a Spirit of fear but of power and love and self-control.” So let’s hope that next time we can tap into some of those qualities and have love be the Christian response that everyone is talking about.

4 responses to “Shame Day: Beyonce, Macklemore and the Grammy Backlash”