Can You Do Halloween Without Buying Into Excessive Consumerism?

We love Halloween. We love getting dressed up. We love carving pumpkins. We love candy.

There is just so much to love, and this year we jumped right into the fray. We even went on John’s first ever haunted house trip, and I had the pleasure of hearing my husband scream in terror.

None of these guys are John, but the same fear is in their eyes.

Unfortunately, Halloween has also become one of the most consumeristic holidays in North America. Here in Canada the amount of money we dish out for Halloween is only second to what we spend on Christmas. Now that Halloween is over, I’ve started to wonder how we could still participate in this holiday without buying in to all the crap we’re told to purchase.

Back in 2013, when we were still doing CWR roundtables, Evan, Gordon and I debated how we felt about the over-sexualized costumes that pop up every year at Halloween. This year, I’ve noticed a lot of women and little girls responding to the typical sexy Halloween nightmare by dressing as their favourite feminist hero. Some of my favourite feminist costumes this year have been “The Notorious RBG” (baby version) and mini Frida Kahlo.

Real life hero costumes are a great tribute, and usually they only involve a quick trip to the thrift store. However, I love seeing the creative alternative costumes that up-cyclers have come up with in their effort to avoid store-bought costumes.

When it comes to costumes, I’m not too worried. As long as I have a bit of time and creativity, I will always be able to avoid buying a ridiculous dollar store costume.

Decorations are a lot like costumes. Every year cheap, crappy decorations overwhelm malls and dollar stores. We know that the majority of these decorations are coming from China, and that the people who made them are working in unhealthy and unsafe factories. Sometimes, we even know that their labour has been coerced.

Honestly, I don’t know the answer when it comes to encouraging safer work environments around the world. But I do know that it doesn’t feel right to buy a cheap decoration that someone may have made in a work camp. Especially when a couple local, home-carved pumpkins could easily do that trick.

Probably the thing I love most about Halloween is the community involvement. North Americans tend to be isolated and lonely people. We may have less crime than we did 20 years ago, but we are far more fearful than we were then. Hearing about every worst case scenario on the news has every parent worried that their child will be next, and inevitably, it means that we lock ourselves away from all the dangers ‘out there’.

Then there is Halloween. 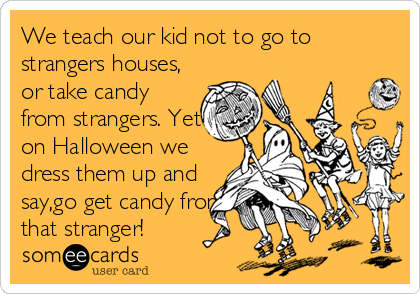 I saw lots of versions of this meme circulating Facebook leading up to Halloween.

Halloween nay-sayers may mock the holiday for giving kids mixed messages, but in reality, Halloween is one of the only days of the year when we make any effort to talk to people outside our immediate social network. When I was a kid, trick-or-treating was how I learned the names and faces of the families in my neighbourhood. Sometimes, I even considered which neighbour’s house I would feel safe running to, if I ever really did experience a threat.

So how do you welcome trick-or-treaters without candy?

You just can’t. Unless you are one of the evil raisin-givers. Those people are tricky. Slip it in your pillow sack without you even noticing!

This year I left my candy purchasing until the day of, so I didn’t have any time to think about a better alternative. Then, when I was writing this article, I remembered something that I had found last year around this time when I was bemoaning this same issue.

How could I forget about Fair Trade Halloween candy? Especially since I already berated myself for the same issue last Valentine’s Day (when I caved and bought some cheap chocolate).

Avoiding excessive holiday consumerism is always a battle. But when it comes to Halloween, it doesn’t have to be. Most of the time, we don’t need to buy any of the things we do for Halloween. For those of us who want to participate, there are plenty of creative alternatives when it comes to costumes and decorations. When it comes to candy (the backbone of Halloween) we have the rare opportunity to support companies that actually pay fairly.

If that’s not a good enough reason to buy a bunch of chocolate, then I don’t know what is.