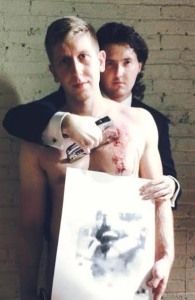 Earlier this month LA-based artist Luka Fisher reached out to me through the site’s email, calling my attention to an art project that may be the first of its kind. Christopher Zeischegg, more commonly known online as porn star Danny Wylde “On The Moral Imperative To Commodify Sexual Suffering“. Accompanying the short story was a silkscreen print created by Fisher, which was in turn featured in a high-concept art commercial directed by Matthew Kaundart. Through this correspondence I was given the wonderful opportunity to discuss the story with Zeischegg, as well as pick his brain on a number of other topics.

Before proceeding onto the interview I would strongly encourage you to read his story, or at least watch the video, which I’ve embedded below. I would also like to warn you that both are decidedly not safe for work before proceeding.

So before we really get into things, Luka Fisher, the artist who emailed me and who collaborated with you on the release of your short story, described you as a “BuzzFeed sensation”. Would you say you live up to that title?

I didn’t participate in that press release. I would not call myself one.

So the reason for this interview even existing is because of your short story, “On The Moral Imperative To Commodify Sexual Suffering” [which I’ve asked my readers to check out first], which of course presented alongside a piece of static visual art-

-as well as a short film. On top of all that you’re also one half of a Chiildren, a metal band, so I think it probably goes without saying that you’re by most definitions an artist-

Yeah, I guess so, I would agree to that.

–before we really dive into the story I thought it would be cool to hear your thoughts on pornography as art.

Which I guess you could call art. It’s a nuanced conversation. It’s entertainment.

“On The Moral Imperative To Commodify Sexual Suffering” is at least partly fictional, given that you’re alive and talking to me today. Some of it is rooted in reality, however, particularly the section about your retirement. Can you reveal anything about your decision to splice what I can only describe as “horror” onto your actual life-

I don’t think Matthew, the filmmaker, knew this going into it, but I think my aesthetic in working with a lot of art forms, literary or otherwise, is related to that. I enjoy the horror aesthetic and so forth.

And maybe I don’t have those certain feelings 100% of the time, but yeah. I don’t know, it’s kind of a literal and visual art angle I’ve gone with for a while. I released a book earlier with a similar tone. An autobiography of sorts with a lot of violent fiction.

I’ve heard some insidious rumour, and I can’t verify this. I heard from someone that they’re basically a datamining company. So if they have a 68 Alexa rating [66 at the time of this writing] at large percentage of the world traffics your website. If you have a key researching their browsing patterns, whatever, they could sell that. It’s feasible, but again, completely unsubstantiated. 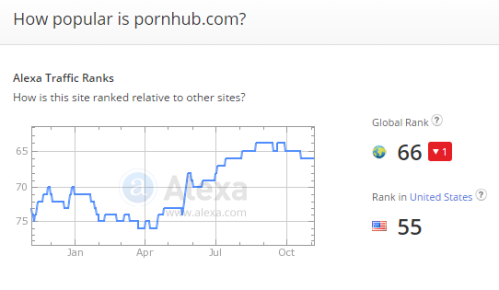 You mentioned earlier that you work in part for James Deen. Would you say that his business has been affected by MindGeek?

I would. But I don’t know the exact figures and I won’t speak on behalf of his company. I just work in production and post-production, so I think it would be stupid to say what we’re making. And I don’t want to ruin his relationship with people. I say this not as an official employee, and again he’s not my only employer, though he is my primary one. I think very highly of him and I think we do good work, just on a pretty small scale.

Right now as far as who’s on set most of the time it’s just James and me. That’s our production crew. We update a little bit and add more people depending on the project. You can ascertain due to overall budget cuts in the industry (he operates outside of MindGeek) that the money’s not there that used to be. There used to be more than two people on set to make a movie. That’s just my experience from being on set, sometimes as a performer, for the past 10 years or so.

We still do good work, we make it happen. But from a financial point of view, yeah, it probably affects us.

Now that you find yourself on the other side of the camera would you say that things are any different from the way they were just two years ago?

Let me just say that I don’t necessarily think anything’s changed since then. As far as that situation goes you have to see my headspace. First of all I think it’s very easy as a White person, certainly as a White male, in the US. You hold a privileged position. That is not a very unpopular purview; it’s true.

I arrived on set and didn’t know what was going on. Someone says “you’re gonna be this Asian guy on The Walking Dead.” I’m like, okay, that’s kind of weird. [laughs] Everyone is like, “haha, you’re gonna be great, it’s funny.” We’re all really in this context of being that it doesn’t affect anyone, it’s just funny. We’re not doing anything bad. It’s stupid, I was stupid. It’s embarrassing in the aftermath. I don’t know if I can say anything besides I fucked up and people pointed it out. And I’m happy people like you are willing to make that a conversation.

Talk to the guys [Black male adult performers], some of them won’t do it, and some of them will if it’s presented. I always wish this situation in its entirety was different. I don’t necessarily want to speak on behalf of those people because if you’re Black male talent and you’re doing this job you have a reason. Maybe you don’t have a lot of alternatives.

It depends on who you work for. We don’t do that, we [James Deen] don’t pay more for interracial scenes. That is an actual thing in the industry, though. I see girls on Twitter say “I’m doing my first interracial!”

Kind of at first, when I first quit performing. Then it was this large scale immediate rush just to find work. When you’re in the industry you get to know people, it’s easier to do a job for someone you know. Working for James was the best situation overall. I have flexibility with my schedule and decent pay. I just think he’s kind of the best at what he does, so it’s more or less easier to shoot for him. With James you get a good scene almost always. I don’t know at this point that I’d want to work for anyone else in the industry.

As far as stepping away entirely, I have thoughts about that but don’t think it’s feasible in the near future. Not sure what I’d do for money outside of that. Besides writing, all of these other things. It’s difficult to make a living doing that-

[laughs] Everyone wants to be the next great American Author-

-[laughs] I’m not holding my breath on that. It’s just something I enjoy.

Kind of. I don’t know if my work is more financially viable than anyone else’s. But y’know, these days publishing and everything else is in the toilet. It’s difficult to get people to pay for media. So having any kind of celebrity attached to your name is a selling point.

Finally I’d like to thank you for what has been a legitimately fascinating look into the industry, as well as your own career and art. To close things off is there any work of yours you’d like our readers to check out?

Yeah, sure. I mean, I’ll plug the book and the band I guess. There is that book that came out this year, The Wolves that Live in Skin and Space, I guess an autobiography horror hybrid. And then I have a band called Chiildren which is an industrial metal band out in LA. You can check us out on Facebook, and you can find other stuff through there.