Hollywood’s Cover-Ups or Indonesia’s Castration Method: How Should We Deal With Pedophiles?

The sexual assault of a child is the most abhorrent crime in the world. As a society we curse those who commit such crimes and refuse to recognize them as anything but outsiders and deviants. Unfortunately, pedophilia is far more common than we care to admit.

Former child actors Elijah Wood and Corey Feldman recently drew attention to the problem of pedophilia in Hollywood. While Wood only pointed to events he had heard about (and last year’s documentary film, An Open Secret), Feldman referred to his own experience with abuse

Unfortunately for Feldman, even if he would like to call out the men who abused him as a child he is unable to do so for legal reasons:

In a stark juxtaposition to Hollywood, Indonesia is also in the news for their dealings with pedophiles. After a 14-year-old girl was brutally gang raped and then murdered, President Joko Widodo introduced a new law that would mean the death penalty or chemical castration for the sexual assault of a minor.

After reading about the injustice of Hollywood, where survivors are unable to prosecute the predators who took advantage of them, reading about Indonesia can feel like a breath of fresh air. However, it’s worth looking beyond our gut reaction to ask if forced chemical castration, and the possibility of the death penalty, will actually work as a deterrent against the sexual assault of a minor.

When it comes to chemical castration there seems to be a lot of debate, and I’m honestly not 100% sure where I stand. In Germany there has been a much lower rate of recidivism among pedophiles who’ve chosen the chemical therapy as part of their reintegration into society. However, some experts insist that chemical castration, especially when it is forced onto offenders, only addresses one part of a bigger problem. As Frances Crook of the Howard League for Penal Reform explains,

Sex offending is often not about sex at all, but about violence and domination. The drugs used will not affect those attitudes. Some men may inflict other types of deviant behaviour on victims if they are unable to perform sexually due to the drugs. The physical impact of the drugs can be very powerful, with the effect being similar to a sex change.

Unlike chemical castration, the death penalty serves no therapeutic purpose and is only meant to act as a deterrent. Unfortunately, studies have repeatably shown that the death penalty isn’t actually effective at preventing people from committing the crimes that are punishable by death.

So, keeping all this in mind, how should we deal with pedophiles?

I ask this question in the title of my post, but admittedly, I frame it unfairly since I don’t believe we should deal with pedophiles using either method. Hollywood has only hidden away their predators and by doing so, once again victimized the children who were affected. While Indonesia’s approach seems entirely different, it too will drive pedophiles underground, since to come forward for help could mean forced chemical castration or even death.

You can get an idea of how most people think we should deal with pedophiles by checking out the kind of memes that have been made on the subject. 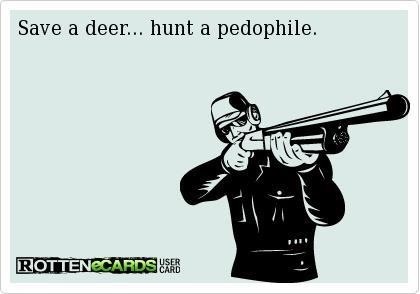 When we jump to express our (legitimate) disgust for anyone who has admitted such an impulse, we only help to push this fairly common disease into the dark where it flourishes. We refuse to recognize that seemingly “normal” people around us could be prone to such an evil impulse. Unfortunately, by framing all predators as outsiders and deviants we actually allow them to hide in plain sight.

It’s easy to talk about castrating or killing someone who has dared to consider assaulting the most innocent members of our society. Many people like to talk about taking revenge after the worst scenario has played out, but no one wants to exert the time or energy that might help prevent it.

I would argue that if we really want to protect our kids we have to go beyond empty threats.

None of us are one-dimensional beings, not even predators. When we hear about someone committing assault, we can’t forget this fact. Someone can be a sexual predator while still being an excellent artist, or an intelligent individual, or even a loving family member. When we claim that someone cannot be a predator because they are “too nice” or “too talented” or “too smart” we only confirm the myth of one-dimensionality, a myth that allows perpetrators to hide in plain sight.

You probably know a survivor of childhood sexual assault. Even here in Canada, some statistics claim that 1 in 3 girls and 1 in 6 boys experience an unwanted sexual act. What kind of message do you think it sends to the person in your life who experienced assault when your impulse is to disbelieve a survivor who has come forward to accuse a powerful perpetrator?

2. We need to allow pedophiles to seek help before they hurt someone.

Once we realize that pedophiles aren’t outsiders or deviants hiding in the bushes, we can see them as the sick members of society that they are. While many are indeed predators that are waiting for an opportunity, some are actually seeking out help.

I recently saw an interview with a member of Virtuous Pedophiles, a support group website for anyone who has felt sexually attracted to a minor, but wants to ensure they never act on that impulse. The man being interviewed explained that his website was made to help stop crimes before they even start. At the time when I watched the interview, the comments section was already exploding with death threats. When I tried to find it to include in this post, it had been taken down and I couldn’t find evidence of it anywhere.

As a society obsessed with punishing pedophiles (often to feel better about ourselves), we have embed myths that discourage survivors from accusing powerful or popular perpetrators and discourage non-offending pedophiles from seeking help before it’s too late.

Maybe it’s time we reconsider our approach. This isn’t to say we remove punishments and restrictions, since those are essential to prevent offenders from ever hurting anyone again. However, it may mean exploring more preventative measures, rather than relying solely on that knee-jerk revenge reaction that makes us all feel a little better.