Our country has a serious gun epidemic.

We’re all aware of it, and it seems that almost weekly now we’re presented with yet another account of a mass shooter wreaking havoc among innocent civilians. We talk about gun control. We talk about mental illness. We talk about religious extremism. But we always seem to skirt around the underlying issue. By doing so we often cause harm to more innocent lives.

There’re so many “red herring” distractions to mass shootings, but the real issue lies much deeper in our society. Through our language, the media, our laws, and our acceptance of gendered norms, we manage to allow these massacres to continue and instead place undue pressure on mental illness. Sufferers of mental illness are often the target, although statistics show they are rarely violent people. The issue lies elsewhere: within toxic masculinity and the need to seek control.

Another Mass Shooting, Always One Group to Blame

Mental illness is commonly brought up after a mass shooting. News anchors will emphasize the importance of mental illness awareness, and will suggest laws to evaluate the mental stability of gun owners. It’s an easy target to paint: those that kill others must be crazy.

The word “crazy” is used so loosely in our society, but it’s with this type of language that we perpetuate the stigma around mental illness. Entertainment and television were large perpetrators of spreading harmful stereotypes for a long time, but that is slowly changing in fictional media. News-centered media is still behind the times, however.

It’s taken us a long time to get where we are today in mental illness treatment and care. According to Bradley University’s research about 18% of the American population admits to suffering from some sort of mental illness. Of those 43.6 million people, only 6.7 million sought and received treatment for their varying ailments. Those who did seek treatment found that it was extremely beneficial, but still only a fraction of those suffering seek out the help they need.

Language and negative connotation are one of the main reasons people avoid seeking help. Despite that fact that only 3-5% of violent acts are committed by sufferers of mental illness, the issue is always brought up around cases of murder and shootings. The mental health of the shooter is put into question, and the media is quick to jump on the blame train; to distance themselves from the “crazy” or “unstable” population.

“We aren’t responsible for this, because we’re not insane.”

This cycle continues; mental illness is blamed, mentally ill people are scared to seek treatment and be categorized with violent individuals, and mental illness is not treated. The danger isn’t that lack of treatment will turn into violent acts, but that it will cause sufferers to seek out addictive alternatives (drinking, pills, etc), destroy their physical health, or force them to turn to suicide as the final option.

When discussing gun violence in America, there tends to be one specific demographic that sticks out among the suspects: they’re almost entirely men.

Now, before you get defensive, let me preface this with a statement – I am not blaming men, I am blaming society’s acceptance for men to be violent.

Patriarchy is a dark and old mess in our country. We were founded by a system that put men next to God, and which placed white male ownership over all others. Without getting into the deep recesses of systemic oppression, we can still see the issues lying at the heart of gun violence.

Men are often the culprits, and the underlying motive is usually to draw attention to themself (the perpetrator) and to silence others (the victims). Rebecca Solnit, author of the acclaimed essay Men Explain Things to Me, elaborates on how male culture is entrenched in a singular idea: that men are more important. This plays into the idea that “when you’re accustomed to privilege, equality feels like oppression.” When men’s voices and opinions are not valued the same as before, those same men get defensive. They try to silence others to maintain their hierarchy.

Of course, silencing comes in many forms. As Rebecca Solnit points out, it can be as simple as men talking over women or expecting women not to know as much about a subject as a man does. She also notes that this silencing can go further, even into mental abuse, violence, and the ultimate form of silencing: death. “Violence is one way to silence people, to deny their voice and their credibility, to assert your right to control over their right to exist.”

This one statement is where the heart of the conversation about gun violence should lie. This hypothesis can be tested in almost every case of mass shootings in the past decade.

The list goes on and on. In all instances the need for control – something deeply embedded in male culture and toxic masculinity – is evident in the intention of the shooter. The conversation needs to shift away from mental illness and towards a solution for solving the violent tendencies of male culture. How can we make men less violent?

These simple solutions have a large obstacle to tackle: that of patriarchy and systems of violence. But by bringing awareness to the problems at hand we can start to change the narrative.

Navigate conversations about violence away from minority groups and towards the larger underlying issue.

Point out the elephant in the room – the problem everyone sees but doesn’t know how to describe – and talk about finding a solution.

Let’s get the conversation started and make a difference in our world. We can change the stigma and end the violence at the same time, but only if we talk about it. 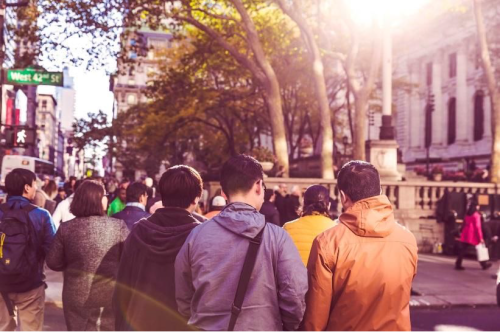 KATIE MCBETH is a freelance writer out of Boise, ID. She is an intersectional feminist, owner of a small private zoo, and can occasionally be found at music festivals cheering on her favorite indie acts. You can follow her animal and writing adventures on Instagram or Twitter: @ktmcbeth.