For the month of July I was living with my in-laws in Williams Lake. So on Monday, July 22nd, I was able to be present at the “first day of public hearings into Taseko’s proposed $1-billion open pit gold and copper mine near Williams Lake, B.C.”

I was working until about one o’clock that day but my mother-in-law, who is a teacher here in Williams Lake, first went downtown around lunchtime at which point two very separate information centers were happening.

Join us and have hot dogs galore!

At one camp, the Taseko mine representatives were serving burnt hot dogs to visitors. There wasn’t much of a crowd, but the vice president of the mine was offering her students jobs if the mine was allowed to come in.

Meanwhile, at the park nearby the Tsilhqot’in nation had prepared a lunchtime feast. There was music and dancing. Most of her friends were at the park. In fact, most of the crowd seemed to be at the park.

When I went downtown a couple hours later the party had wrapped up and the public hearing had begun. Both groups had gathered in the community center, along with press and the federal panel.

There were two very distinct camps in the room. The supporters of Taseko’s New Prosperity Mine wore blue scarves to show their solidarity with the company.

Meanwhile, families from the local reserves and resident environmentalists avoided wearing the tell-tale blue, some wore war-paint and buckskin clothes to emphasize their position. There was tension between the two groups that became more and more obvious as the meeting progressed.

First Taseko reps presented their new application. In their last application process the mine was rejected because it required draining Teztan Biny (Fish Lake), a lake with spiritual and practical significance to the surrounding communities. In their new application they propose preserving the lake and moving the tailing ponds further away, at some great cost to the company.

After the presentation by Taseko, five chiefs representing different reserve communities and government positions within the Tsilhqot’in national government presented their reasons to oppose the mine. The Chiefs discussed many of the concerns also mentioned in the documentary Blue Gold, but specifically focused on the disruption of spiritually meaningful land, the threat towards environment and animal habitat, and the Supreme Court decision to confirm the Tsilhqot’in traditional rights to use the land.

While the Supreme Court decision allows them access to the land, it does not allow ownership or control over it. Chief Russell, in particular, emphasized that “this land has never been legitimately ceded to the Canadian government” as the province of British Columbia has virtually no treaties with its indigenous communities.

The Federal Panel, who I thought were both professional and personable, allowed questions after each presentation. This was when the split between the two groups housed in the one room became much more visible.

Once allowed to question, Taseko took no time in attempting to play the Chiefs off of one another. During his speech, Chief Mack had mentioned what he called “a low-ball offer” from Taseko regarding a site near Taseko’s current Gibralter mine. Shortly after Chief Mack spoke Chief Percy went on to describe his community’s spiritual connection to the land near Fish Lake. Taseko representative Mr. Gustafson referred to the two opinions as a contradiction, saying “I’m having trouble reconciling the two positions that, on the one hand, yes, there are terms and conditions that can be negotiated to allow this development to proceed, and on the other hand it’s sacred and inviable.” 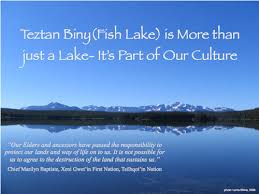 The confusion was resolved when a legal representative for the Chiefs reiterated that Chief Mack’s “low-ball” comment was referring to the already present Gibralter mine, and not the New Prosperity mining plan. Unfortunately the misunderstanding only seemed to fuel the growing animosity in the room.

As more questions were brought forward everyone who spoke obviously had an agenda. There were several environmentalists striving to point out chinks in Taseko’s presentation as well as many Tsilhqot’in representatives who reiterated their commitment to the land and their negative historical experiences with the government and big business.

In contrast to the speakers who were obviously against the mine there were also some individuals who questioned the legitimacy of the Tsilhqot’in claim to some traditions; traditions such as ranching which have been more newly adopted but compliments their traditional lifestyle. Most of the comments seemed to be a pointed accusation against one of the two groups.

At one point the Chair, Bill Ross, attempted to cut off questions by saying “only one more question” but when the three remaining individuals who were waiting by the microphone refused to sit down he conceded and let each of them speak. In frustration, some blue-scarved individuals started yelling “no.” One even stood up and told the Federal Panel to “have some control.”

It’s several weeks later and the debate is still underway. The Federal Panel is being thorough in their examination of every angle. On Wednesday the 31st we returned to the community center to listen in on the debate dedicated solely to Grizzly bears and how the mine could affect their already threatened population.

But people like my in-laws still feel torn between the two very different groups. On the one hand they would love to see more jobs and a boost to their local economy. On the other hand they realize that the mine could cause irreparable damage, not just to the ecosystem, but to the Tsilhqot’in community. There has already been damage caused by the angry debate which has isolated the Tsilhqot’in people from the William’s Lake community, and even caused division among families.

Personally, I feel like allowing the mine to come in is a big risk. We’ve seen mines come into Canada in the past go bankrupt before they could start with any clean up, forcing taxpayers to cover their expenses and causing excessive pollution. The mine’s contribution to the local economy is inevitable short term, because once the copper and gold has been extracted the mine will shut down entirely. And despite arguments that it will provide jobs for locals, all too often mines hire from outside the community. The New Prosperity mine even includes plans for a camp to house employees.

I also feel that it is a contradiction for the Tsilhqot’in people to be allowed fishing and hunting rights by the Supreme Court but be denied any actually influence over areas like Fish Lake, where those rights are utilized.

But what do you think? Should the Tsilhqot’in peoples be allowed to keep their traditional lands free from exploitation? Or is this mine and mining in general a necessary evil to sustain the Canadian, and B.C., economy?

4 responses to “A Culture War Report: New Prosperity Mine”