Shame Day: The BC Government vs. BC Teachers

In full disclosure, for the last few weeks my husband John and I have been working as uncertified Teachers on Call and/or Teacher’s Aides on Call. In my couple weeks attempting to fill the shoes of regular teachers and TAs, I’ve realized that this is an incredibly difficult job. Even though I’ve really loved my experience so far, it’s hard not to notice the ways that teachers are strapped when it comes to providing a good educational experience for the kids.

It’s become particularly frustrating over the last few weeks as the BC Teacher’s Union and the Government of British Columbia have gone head-to-head in a battle over several key issues. This has resulted in strikes by the Teacher’s Union and a lock-out by the province (preventing teachers from assisting at lunch, recess, and at extra curricular activities after school). Most teachers I’ve encountered feel frustrated at having to strike, but they are even more frustrated at being locked-out from helping their students.

Locked out at lunch.

So what are the issues?

I doubt I could summarize as accurately as the CTV B.C. teachers’ dispute cheat sheet, so I’ve included their summary of the two sides below.

B.C. teachers haven’t had a salary increase since July 2010 and are demanding higher wages and benefits.

According to the provincial government, teachers want a 15.9 per cent raise over the next four years that amounts to about 21 per cent with benefits and other provisions factored in.

Teachers have also been adamant about smaller class sizes and limits to how many special needs children are allowed in a single classroom.

They want guaranteed levels of specialist teachers and extra lesson-planning time, as well as more one-on-one support for students who need extra help.

The BC Teachers’ Federation maintains the province’s education funding allots $1,000 less per student than the Canadian average.

What the government’s offering:

The province has backed off on its demand for a 10-year contract and increased its offer to a 7.25 per cent pay hike over six years. It also offered a $1,200 signing bonus if teachers sign by the end of June.

There is no compromise on class size or composition.

The B.C. Public School Employers’ Association’s chief negotiator said meeting all the teachers’ demands would cost $2 billion, or about $1,000 per taxpayer.

We can try to dance around the issue, but we all know money is what everyone really wants to know about. Do teachers need a higher income? Are they just being greedy?

As a starving student who has suddenly come into regular income, teaching looks like a great job. Yet I am continually warned by those around me that I’d better love it if I’m willing to put up with all the extra unpaid labour and stress that goes along with it.

My mother-in-law and I just sat calculating approximately how much she makes hourly, taking into account her prep time. After she came up with the amount she responded with a “well, good thing I like my job!”. I don’t want to violate her privacy by sharing the exact amount we arrived at, but I was able to access some public information about teacher’s wages that I can share with you. According to these wage charts, BC teachers make anywhere from $40,000 to $70,000 annually depending on their years of experience and level of education. According to Global’s “number crunch” the average teacher salary is a little under $50,000. At first glance that sounds like a lot, eh?

A BC teacher, spending his money. Oh wait, no, that’s Leo.

In reality most teachers give up at least a month of their summer (30+ days) and a good chunk of their weekends to prep or undergo more training. The majority of teachers also spend their “breaks” helping students, plus extra prep time before and after classes (let’s go with something conservative, like adding 3 more hours a day). So very roughly calculating those changes we end up with a considerably reduced wage:

For me, $29 an hour is still looking pretty good. Yes, it means saving up so you have enough to last for that unpaid part of the summer, but it’s certainly more than I’m making now. Let’s step back for a second here and give teacher wages some context, by comparing them to Peter Cameron’s wages, for example.

Peter Cameron is the negotiator for BCPSEA. He is paid $225 an hour with a limit of $210,000 in addition up to $10,000 for expenses. So basically the longer he holds out on reaching a decent compromise with the Teachers Union, the more he is going to get paid. The government also saves approximately $12 million and another $4.5 million for support staff for every day the teachers continue their strike.

Meanwhile, the government has begun docking the pay of BC Teachers (10%) until they give up on their demands. One school psychologist, Todd Kettner was even docked $600 while working 70 hours of overtime counselling grieving students after the death of 4 young people in a small community. His letter to Christy Clark has since gone viral. In it he expresses his view of public educators:

I’m a psychologist who has worked in [myriad] publicly funded and private hospitals … I chose to leave the world of private health care in order to try and make a difference in public education. I felt that the substantial pay cut would be worth it in order to join the ranks of so many dedicated teachers, educational assistants, health care professionals, special education teachers, counsellors, school administrators and trustees who strive selflessly every day to help children and youth flourish.

While Christy Clark has approved deductions like this one, she has somehow found enough government funds to increase pay for high ranking political officials (up to $230,000 per year). In fact, many journalists have already questioned Clark’s support for the public school system, since her child attends a private school.

Yes, teachers do want more money. And yes, the BCTF is a union, so their job is to advocate for their members (financially, especially). The main difference between the average union and the BCTF is that members of the Teachers Union care just as much about their clients (in this case students) as their own members. In the past, teachers have given up higher wages or benefits in order to get better conditions for students. Meanwhile, we already know that the BC liberals have been found guilty of negotiating in bad faith by the Supreme Court of Canada.

When I hear teachers discussing the strike, their main focus is always the kids. After spending only a short amount of time in the education world, I can see why they want change so badly. It’s incredibly frustrating to know a child could be performing at a much higher level if only they could receive more teacher attention. It’s also discouraging to have a group of kids in the class struggling with various disabilities, but only one TA in the class to assist them. These are the things teachers are fighting for. And they are some of the reasons teachers feel like they are forced to choose between supporting their current students and creating a better education system for their future students.

But I don’t have to tell you this, do I?

You’re already read the flood of letters from frustrated teachers begging the government to invest in your child’s education system. Even if you don’t have kids, you probably still know a teacher (or several) firsthand and know exactly how badly they want to offer the best educational experience possible for their students.

In fact, the majority of you already support the teachers in this dispute.

As an aspiring teacher I’m scared of what the future of BC will look like if the BC government continues to bully teachers into putting up with an underfunded school system. Shame on you BC Liberals. Our kids, and teachers, deserve better than this.

This past Thursday the BCTF served a full strike notice. On Friday school administrators in some districts confiscated keys from all the teachers, a move that was insulting for teachers who have been trusted with their own school key for years. Over this past weekend teachers have dropped their wage demands 7.9% (down to 8% over five years) in order to focus their demands on issues of class size and composition. Instead of meeting the BCTF part way, the BC government responded by decreasing their original offer by .25%. They also avoided actually coming to any decisions regarding class size and composition. According to BCTF president Jim Iker, the BC government “sat on their hands for two days” and avoided responding in full to the offer made by teachers on Friday evening until Sunday night.

Many teachers feel that the government is happy to just leave the strike to play out. That way they save the money they would normally be paying our teachers as parents scramble to find childcare for their children. At this point, teachers don’t have a lot of leverage in this issue. While the BCTF job action frustrates parents, the BC government is quite happy to save money by letting the strike continue. That’s why we need to help give teachers a voice.

On Friday, as the BCTF was in apparently futile negotiations with the Government, Kate Coghlan posted this photo and prompted the #thisismystrikepay hashtag that has started trending on twitter: 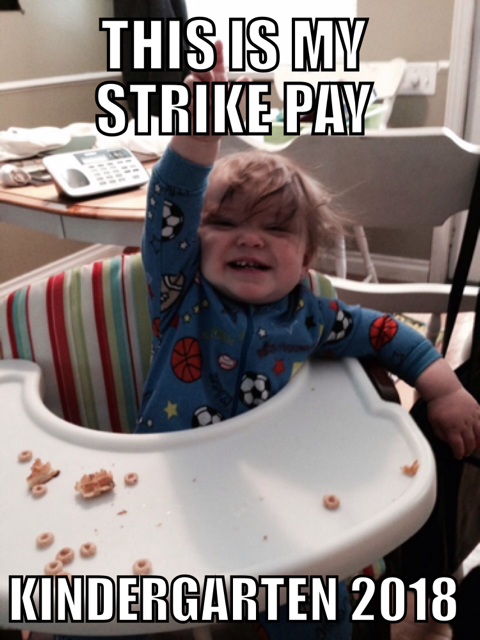 So join me, Coghlan, and hundreds of teachers, parents, and concerned citizens while we make our presence known. Maybe while we are at it we can remind the BC Liberals that they #lostmyvote.

8 responses to “Shame Day: The BC Government vs. BC Teachers”