10 Things I Wish I Knew Before Our Trip to Cuba

As you probably remember from last week, John and I just went on our belated honeymoon to Cuba. 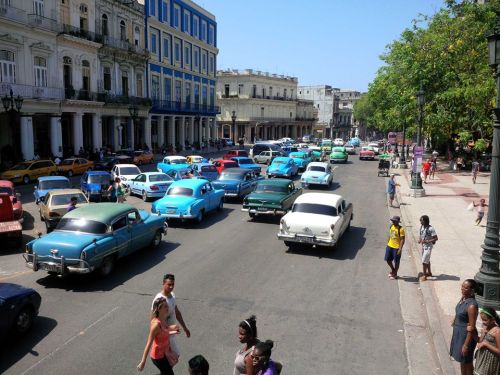 And yes, there were awesome old cars everywhere.

We only went for one week, but we had a blast. The beaches were just as warm and beautiful as I’d been picturing. There were cigars available everywhere, just like John had been hoping. And the architecture in Old Havana was just as beautifully eclectic as you’d imagine for a country with such a fascinating history.

The only problem was, I really didn’t plan out our trip at all. Our entire summer was one crazy adventure after another and this was our final journey, so I was too busy planning other things to do much more than book an all-inclusive. While we did love our little escape, there are a few things we learned along the way that I wish I had known beforehand.

1. It’s Important to Read Hotel Reviews Before You Buy Your Vacation Package

Our first night in Cuba wasn’t ideal. When we arrived in Cuba we were exhausted, and it was already dark because our plane had been delayed by several hours. Sunwing, the all inclusive company we traveled with, provides buses to take passengers from the airport to the hotel. As our bus dropped off passengers in the Havana area, we were able to see the variety of beautiful hotels and resorts other tourists had chosen. Then, we arrived at our hotel, and I suddenly realized why I should have read the reviews. Or at least trusted my friend/travel agent a little more and left the hotel-finding up to her.

It’s not that the hotel was awful. In fact, in the light of day we actually really came to enjoy our little space. 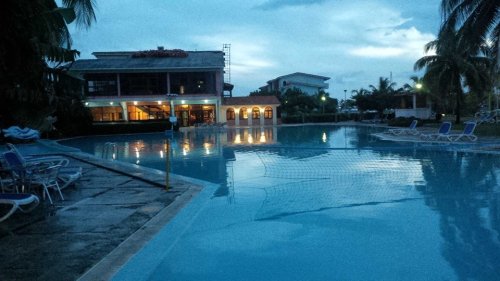 But in the dim night-time lighting, all we could see was the chipped and missing tiles that would have given my dad a heart attack. The place also looked deserted. The few staff members who were still up and about seemed to have trouble understanding us, and the one other tourist we bumped into told us we should “definitely try to find a different hotel.”

I don’t regret our hotel choice. Leading up to our trip, I had no time or energy to plan out our trip. It was also the only all-inclusive within our price range that was close to Havana. That being said, in the future I would do a few things differently.

2. It Might be Better to Choose a “Casa Particular” Over an All-Inclusive

If I went back to Cuba anytime soon, I would definitely try to stay at a “Casa Particular” rather than an all inclusive.

This is the sign for a Casa Particular. We saw these signs everywhere.

Everyone I know who loved their Cuba experience stayed at one of these bed and breakfast type places. Everyone I know who did not particularly love their Cuban vacation stayed at an all-inclusive. There are probably two reasons why this seems to be the case. One, because the food at the resorts is mediocre at best, so you might as well eat out, and two, because the people are the best part of Cuba and you rarely get to see them when you are stuck at your resort.

If vacation to you means spending time in the ocean, then you should be aware of just how far your hotel is from the beach. Even though our room had a beautiful view of the ocean, we couldn’t really swim in it where we were.

Because it was a marina.

Our hotel had a shuttle bus to Santa Maria Beach every day. It dropped us off directly in front of a different all-inclusive, one that I had dismissed when looking online because the building wasn’t very pretty.

Then again, the hotel really doesn’t need to be pretty when it’s looking out over a beach this beautiful.

If we had ended up spending all our time on the beach I would probably regret not having booked that hotel, but in the end we were too distracted by Old Havana to spend all our time swimming.

4. Bring a Guidebook about Cuba (or Take the Tours)

If you have a question, you probably won’t get to “Google it”. Internet access is very limited. At our hotel we had the option of renting out an hour of internet on a public computer for 6 dollars. Instead, we decided to try asking the people around us. The majority of other tourists at our hotel only spoke Spanish, but we did manage to take a couple bus tours during our time in Cuba. These were by far my favourite vacation experiences. We got to learn things about Cuba I had never known before.

Below are photos of two of the more surprising things we saw on a tour: an extensive cave network where escaped slaves once hid during colonization (and now used by a disco) and the Viñales Mural de la Prehistoria.

Getting a good cigar was part of John’s motivation for going to Cuba. We were warned early on not to buy cigars from street merchants, since they were usually fakes and sometimes just rolled banana leaves. Luckily, during our second last day in Cuba, John got to have his dream tobacco excursion. Not only did we get to see a tobacco farm, but he also got to load up on cigars. Cigars that had better last him for the rest of his life!

Some of the tobacco at the farm was left out drying to show the tourists.

Hand-in-hand with cigars, of course, is rum. Vitamin “R” was an ongoing joke with our Cuban tour guides. I didn’t really take this seriously until I started watching how they made cocktails at the bar. Here in Canada half the glass is filled up with ice, but in Cuba they fill the glass at least half way with rum before squeezing in some ice and other ingredients. I never entirely quite got used to their Cuba Libre (half rum, half coke) but I did get to taste the best pina colada of my life!

There were so many times we wished we spoke Spanish. It’s not that people don’t speak English in Cuba, many people do, but our resort was a little off the beaten path and seemed to be only frequented by Venezuelans, Mexicans or Cubans. Everyone was friendly, but all we could really do was wave at each other and say “hola”. There were even a few times where we found ourselves unable to communicate with staff members at our hotel.

6. Be Prepared to Pay for the Bathroom (And Tip for all Services)

This is becoming a reality in most major tourist destinations, so it’s worth being prepared wherever you go. You might be especially thankful that you brought a tip once you realize that the bathroom attendant (the one you tip) is also the person with all the toilet paper.

When there is toilet paper. It never does hurt to bring along your own, just in case.

A snapshot of a poster we saw in Cuba.

Like every city with a lot of tourists, Havana had a lot of people willing to help clueless tourists part with their money.

There was even a Cuban girl we met at our resort who was scammed by a “street artist” in old Havana. She just could not believe she had been flustered into giving away her money for a scribble that took the man less than a minute to make. She kept saying “I can’t believe I fell for that, I’m Cuban!”

Unlike many other tourist destinations, it’s nice to know that withholding your money from someone doesn’t prevent that person from getting a meal, or health care, or even an education. Heck, they probably have less debt than most of the tourists (especially if any of those tourists are North American university students).

Having lived next to the States for so long, I imagined Cuba to be something worse than it really is. Yes, it’s not always comfortable, and the food might not always be to my liking, but I would definitely rather be poor in Cuba than poor in the States.

This was something someone suggested to us that we didn’t end up doing but wished we had. There are a lot of things that are easy for us to buy (and cheap) in Canada that are a little harder to come by in Cuba. Things like duct tape and school supplies are some suggestions we were given.

There were also several people along our journey who went above and beyond their jobs to make us feel comfortable. I would have loved to have had something “Canadian” along to give away as a thank you.

9. Set Aside Money to Pay the Airport Tax When you Leave

The airport tax is 25 CUP. I had no idea until our Sunwing Representative told us. I have no idea what would have happened if we had just showed up at the airport. There was a place to exchange our money, but it was on the other side of customs.

We ran into a Canadian couple that tried to use their credit card to take out money only to discover it was issued by an American company. It didn’t work. They ended up going to the Canadian Consulate and they were somehow able to take out money there, but for a few days they were reliant on the kindness of their Sunwing representative.

Maybe these tips sound like too much work for a vacation. Then again, during our trip, we didn’t even think about a lot of these things and everything still worked out okay. Yes, there are a few things I would do differently if I visited Cuba again but most of all, I’m just happy we went.

What about you? Have you been to Cuba? If so, is there anything you would add to my list of travel tips?