So ends the two–part Jake Wyatt-illustrated Wolverine-guest-starring arc of Ms. Marvel, not with a bang, but with our young heroine having learned a great deal from the world’s most famous Hulk combatant. The next storyline doesn’t begin with a bang, either, more like a FZZZT, or at least that’s what I imagine a gigantic teleporting bulldog sounds like.

Sent by Medusa, Queen of the Inhumans, the royal pet has arrived in Jersey City to protect and train the fledgling crimefighter. His entrance is exactly the kind of thing you should expect from duo Wilson and Alphona [who is back, by the way], running up to her with a sign around his neck that reads “HELLO / MY NAME IS / LOCKJAW / I LIKE HUGS“. While her ammi and abu seem surprisingly accepting when it comes to letting her take in an animal with what appears to be a tuning fork sticking out of his head, she’ll need the Inhuman canine in her trials to come.

If you remember at all last issue, it turns out that The Inventor is abducting kids and using them to power his various death traps, murderbots, etc. Kamala does some investigating [she gets her friend Bruno to look up the coordinates to the missing girl’s “Facehead” status] and it turns out that it was a little spot outside Bayonne. Google Maps tells me that this is across Jersey Bay, and since Ms. Marvel can’t fly [yet?] she has to find some other way to get there. Honestly, as a whole this issue is pretty straightforward. Kamala and Lockjaw find an abandoned power plant, fight a mech together, rescue the kid inside of it, and FZZZT him to a hospital. She then heads to school somewhat tardily where her friend Nakia suspets that something is up. Like I said, pretty standard stuff.

Where things get really interesting is when yet another mech crashes into the classroom, having used an adorable little matchbox-sized robot that snuck into Kamala’s boot as a homing beacon. Here we’re presented with the age-old conflict of having to save the day without letting those closest to you catch wind of your secret identity. Luckily for our heroine, she has shapeshifting powers!

If you can think as far back to Issue #4, Ms. Marvel can heal from grievous injuries, but only when in her natural state. The mech knocking down a wall has wounded her enough to warrant putting some of that regenerative ability to work, but upon realizing that she’ll need to change faces to take it out she closes her eyes, concentrates, “and nothing happens.”

Her ability to transform her appearance had a lot to do with her search for identity, deciding to be brown Pakistani teenager instead of blonde-haired blue-eyed Carol Danvers. Now that she’s fully embraced her identity what’s left, why aren’t things working the way they should? The last page has Kamala and Lockjaw stranded in the school building facing an enormous mechanical bruiser wielding what I’ve dubbed “nega-sticks”.

We know it won’t be game over for Ms. Marvel, but will this be the nail in the coffin for her secret identity? 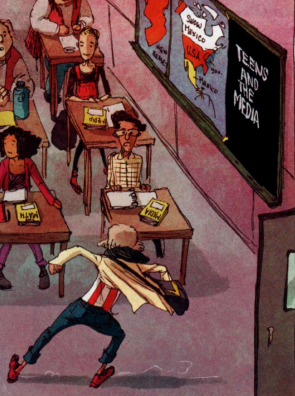 The Ms. Marvel Visual Gag You Shouldn’t Have Missed: As much as I gushed over Wyatt’s art, I did really miss this feature. There was pretty much no other option for me this issue given my current country of residence. If you can ignore Kamala’s awesome Captain America shirt take a gander over at the poster on the right, where Canada has been dubbed “Snow Mexico.”