…then you’re going to run into some problems.

Firstly, that kind of self-image is staggeringly unsound. Without it being grounded in any actual quality or skill, your sense of self-worth can be leveled just as quickly as it can be built up. Just from a practical standpoint, blanket self-acceptance doesn’t last or hold up.

Secondly, when blanket self-acceptance does occur, it tends to have some pretty negative affects. I can tell myself that there’s nothing wrong with me, that I’m a beautiful and unique snowflake (to steal the words of Tyler Durden once more), but that’s so often not the case. In case any of my readers haven’t noticed by now, yours truly is a pretty prideful and arrogant person. I generally manage to work around that by being perfect and correct all the time, but it’s still not a good quality.

And the real kicker is when that starts leaking over into actions. When I believe myself to be perfect (or simply flawed but not able/not needing to change), then I kinda start ceding responsibility for my actions. I can be rude and say “hey, that’s just who I am”. I can be selfish and say “Love me or leave me”. Or, to quote that drug-addicted, cheating, air-headed starlet Marilyn Monroe: Or- or– you could get some ****ing self-control. That might be an option, too…

Now I am not talking about self-hatred here, I’m calling for accurate self-image. If I wake up at 5’3″, 280 lbs, I can think “Hey, I should probably lose weight” OR “I’m overweight and I’m okay with that- I don’t really care for exercise and I love me some food”.

While Evan and I have talked about what we think the general standard for fitness should be, so long as a person’s relatively fit, I don’t take an issue. I myself am no glistening Adonis, no matter what the public might tell you.

Yeah, that ain’t me. Less Michael Fassbender and more Horseman of the Apocalypse representing Famine…

The issue here is that the righteous crusaders in the “Fat Acceptance” movement don’t quite seem so open to the idea. Observe this picture below.

For all the talk about “just accepting” oneself and one’s body, this same tolerance often seems not to be extended to folks who are (or prefer) skinny. And lest anyone accuse me of blaming the entire movement for the sins of a vocal minority, these things are pretty dang prevalent.

For the sake our collective sanity, I am not going to list all of ’em.

And of course, if that’s looking vaguely familiar, it’s possible you’ve already heard/seen the same sentiment in Meghan Trainor’s 2014 debut hit “All About That Bass”. In addition to such imagery as this-

-we were graced with such lyrics as:

“Go ahead and tell them skinny bitches Hey
No, I’m just playing I know you think you’re fat,”

– All About That Bass – Meghan Trainor

And I know that neither Meghan Trainor nor the people posting those images above are the chosen representatives of the Fat Acceptance movement. All the same, these folks (and their ideas) are very much present within said movement, and that attitude just isn’t healthy for anybody.

And speaking of health, what about anorexia? 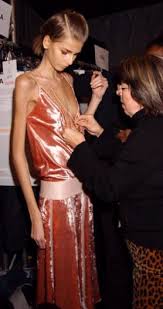 If we truly are supposed to accept all body types as the Body Positive Movement demands, then wouldn’t that include the underweight?

“But Gordon, you gallant and resolute bannerman of the forces of reason, under-eating is a serious disorder!”

I agree completely. But surely over-eating is an issue as well, right?

“No Gordon, you swashbuckling paragon of virtue, the Body Positive Moment- and Kat’s article- both clearly emphasize that they are in favor of people accepting their bodies when their bodies are healthy!”

Touché, dear readers, touché. But for all that rhetoric, we get a ton of folks in said movement (at least, rallying behind it) like this:

And look, I am not a doctor, a dietitian, or anything even remotely close. That said, I feel confident in venturing that the human body is not supposed to look like the image above.

Yes, Kat did bring up the number of seemingly heavy people who are, in reality, far more fit than most skinny people, but let’s be real here. The nearly 70% of Americans who are overweight/obese are not Olympic athletes or unlikely gymnasts. These folks are the exception, not the norm, and pretending otherwise would be delusional.

It’s still probably horses and being fat probably indicates higher risk of heart disease, hypertension, and a host of other problems it’d be absurd to ignore.

“But it’s not a choice for so many people!”

The single mother living on the edge of poverty, working two jobs to just barely scrape by- yeah, she’s probably going to have weight problems. After a long day of backbreaking labor and stress, she’s still probably only going to have enough energy and money to get cheap, unhealthy food. I’m not blaming her for her situation and anyone who does is a dirtbag.

I have the lingering suspicion that were it this woman’s choice, she’d choose a healthier lifestyle.

Probably, anyways. As I touched on before, there are folks who openly admit “hey I’m cool with my lifestyle.” I might not agree with their choices, but I can still maintain a level of respect for that. Problems arise, however, when folks make the argument that there’s no difference between overweight (or underweight) and fit. The folks who claim not to have a choice (when they actually do), the folks who look surprised when they have to buy an extra seat on the airplane, the folks who post pseudo-science like this to justify themselves:

That’s where we’re going to have some problems. This junk (and there’s no shortage of it) isn’t self-acceptance, it’s solipsism.

That’s why we don’t need fat acceptance. Not as it stands presently, anyways.

In full summation, we have an often hypocritically-selective movement that frequently uses spurious reasoning to draw poor conclusions in the desperate pursuit of ultimately empty self-affirmation.

And I’m not blaming ’em. Not trying to, anyways.

It’s just that the fat acceptance movement simply is not that answer.

7 responses to “Why We Don’t Need Fat Acceptance”