4 Reasons Why You Should Watch Ghostbusters

I’m going to watch Ghostbusters tonight and I am crazy excited. Here’s why I can’t wait to see it in the theatre, and why I think you should shell out the money to watch it there too.

1. It will piss off the misogynists spewing their garbage all over the Internet

As you may have heard, the trailer for this year’s Ghostbusters reboot was the most downvoted video of all time. Even though every woman knows not to read the comments on any video containing a woman, I thought I’d take a look just to see what was rising to the top. I was treated to comments like these,

This, along with the general sentiment that “any reboots staring women couldn’t be good,” was the first strike that got me excited to watch the movie. Mostly, I was just feeling spiteful towards the internet trolls who teamed up with the goal of making this movie suffer.

2. It will piss off racists who are using their dislike for the movie to publicly air their racism

Leslie Jones has been in the news quite a bit more than her costars. Recently, it was because she called out designers for refusing to make dresses for women who aren’t sample size.

It's so funny how there are no designers wanting to help me with a premiere dress for movie. Hmmm that will change and I remember everything

Jones costar, Melissa McCarthy, also experienced this size prejudice “two oscars ago” when many designers refused to make a dress for her. In one of those rare nice moments on the internet, many twitter users spoke out in support, and Christian Siriano quickly stepped up to design a stunning red dress for the Ghostbusters premiere.

After Fight to Get a Dress, Leslie Jones Dons Christian Siriano to "Ghostbusters" Premiere https://t.co/NsxxFq6VPw pic.twitter.com/f8C7LhYDlz

Unfortunately, Jones didn’t solely receive support online, she was also criticized for not being pretty enough for designers in the first place. One critique went so far as to say,

While this insult is awful enough to begin with, much worse began to pour in after the movie was released. Jones attempted to expose many of these racists by retweeted some of the worst tweets, but eventually she was overwhelmed.

I leave Twitter tonight with tears and a very sad heart.All this cause I did a movie.You can hate the movie but the shit I got today…wrong

Since many of these commenters are hiding behind their screens, it’s hard to know how to fight this kind of hate. However, it couldn’t hurt to support Jones’ first big film and tweet a little #LoveForLeslieJ.

Look at these childhoods that have been ruined! pic.twitter.com/DBUX0swyvS

We’ve addressed the problem of representation (or lack of representation) over and over on this blog. However, the picture above may summarize this issue better than any words I could write. If you’ve ever watched a character who looked like you do something cool on the big screen (especially when you were a kid), then you will understand how important it is to provide roles to actors from a variety of backgrounds and walks of life.

4. It was actually a great movie 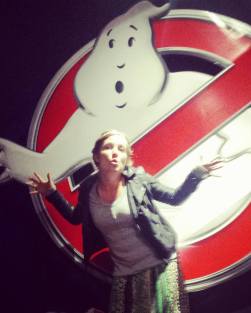 When I first started this post, I hadn’t actually seen the movie. Tonight I went to my first viewing (I say first, because I plan to go again soon).
Even if I set aside the reasons I listed above, I’m still glad I saw this movie. It was funny enough to keep me laughing out loud (although admittedly a few jokes fell flat). The characters were also relatable and the plot was interesting enough to keep me watching. If I’m completely honest, I probably enjoyed it even more than I did the originals.
Whatever the reason, whether to spite racists and misogynists, or to introduce cool new heroines to your little girl or even to just enjoy an entertaining blockbuster, Ghostbusters will deliver.

7 responses to “4 Reasons Why You Should Watch Ghostbusters ”