It’s a term that elicits a broad range of emotions, with each of our respective childhoods affecting how we react to it. Who we were, growing up, is a significant factor. But what about instances when who we are now is worlds apart from the person we once were?

Having spent much of her career up to now working in television, Mum is Anne-Marie O’Connor’s first short film, and one that she created with the help of star Kate O’Donnell, a transgender actor. Her debut short focuses on a trans character of the same name whose visit home is derailed by the discovery that her mother is in very poor health.

Much like the director, O’Donnell’s limited experience is also in television, where she starred in an episode of the transgender romcom series Boy Meets Girl. As the character at the centre of this short film she delivers a performance that, while uneven at points, always feels painfully real. END_OF_DOCUMENT_TOKEN_TO_BE_REPLACED

4 Reasons Why You Should Watch Ghostbusters

I’m going to watch Ghostbusters tonight and I am crazy excited. Here’s why I can’t wait to see it in the theatre, and why I think you should shell out the money to watch it there too.

1. It will piss off the misogynists spewing their garbage all over the Internet

As you may have heard, the trailer for this year’s Ghostbusters reboot was the most downvoted video of all time. Even though every woman knows not to read the comments on any video containing a woman, I thought I’d take a look just to see what was rising to the top. I was treated to comments like these, 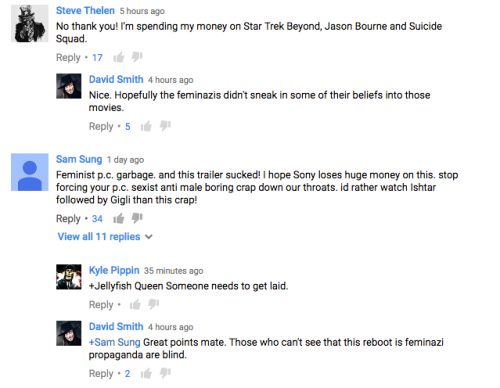 This, along with the general sentiment that “any reboots staring women couldn’t be good,” was the first strike that got me excited to watch the movie. Mostly, I was just feeling spiteful towards the internet trolls who teamed up with the goal of making this movie suffer. END_OF_DOCUMENT_TOKEN_TO_BE_REPLACED

I was in a dark place when I wrote the post I am least proud of: Fame Day: Creativity [and Imagination]. It’s not that I don’t think it’s a relevant topic, especially right now when it’s more common to see children in front of screens than playing make believe with their toys, it’s just that at the time I figured that writing it was the easy way out. As luck would have it, all of that segues really smoothly into today’s topic-

I hate dark and gritty fan art because it is both uncreative and lazy.

To be totally transparent, I was a high schooler once, so I did think these were really awesome once upon a time. It wasn’t until much later when I realized that if you want to take a beloved childhood character and make it appeal to a large section of the internet you have three simple options:

There are altogether far too many gritty Inspector Gadget pictures out there.

END_OF_DOCUMENT_TOKEN_TO_BE_REPLACED

A couple days ago, I came across Primer, an online magazine declaring itself “A guy’s post-college guide to growing up.” At first glance, it appears to share a lot of similarities with another publication I reviewed, The Art of Manliness, and while I’d like (and intend) to do a full-on compare/contrast piece, I’ve still got some research to do. As of yet, though, the primary distinction between Primer and Art of  Manliness is that the former appears to be a lot more validating of the millennial generation, who are more commonly accused of laziness, selfishness, and naivety.

And let the debate rage on…

END_OF_DOCUMENT_TOKEN_TO_BE_REPLACED

2 Things Boys Need To Know About Their Sexuality

Without wasting any time here, the first is obvious, and I’ve written about it a lot. Whether it’s about the way we use the word daily or what has said about it in rap music, I’ve scrutinized the act because of how incredibly damaging it can be, how frequently it happens, and the attitude many have towards it.

I was linked to the following video via a gifset on imgur, and while I’m not a person who knows a great deal about slam poetry, this is well-worth the watch: