Sorry, Clinton- These Are The First Women To Have Run For President

“Here’s the thing about Hilary- you don’t have to like her, but you do have to admit…”

If I had a nickel every time I heard those words I’d probably be rich enough to pay Clinton’s speaking fees. And that was before her official nomination on July 26th. Now the news, the papers, and the internet is awash in varying degrees of jubilation and grudging respect.

“You don’t have to be happy about her, but you do got to admit that it’s pretty historic that there’s a woman running for president.”

In spite of the Democrats’ latest attempt to rewrite history in their favor, Clinton is not the first woman to have run for president. Hell, she wasn’t even the first female candidate to be nominated this year.

There are scores of women who have boldly run for president, have done so before Clinton, and have done so on infinitely more admirable platforms and causes. It is these women who should receive our recognition- and of the 30+ or so candidates in American history, here are just a few of the highlights:

Introduced legislation against the Iraq War (the one that Clinton voted for), as well as the impeachment of George Bush and several high ranking members of the administration. McKinney additionally attempted to introduce bills to halt the transfer of arms to countries with poor records on human rights (another dissimilarity with Clinton). Perhaps most impressively, McKinney managed to get herself arrested during a humanitarian mission to Gaza in 2009, after the aid ship Spirit of Humanity was boarded by Israeli forces (this being, of course, the same apartheid regime that Clinton has pledged her unconditional support to).

Anti-war (once again, unlike Clinton) and women’s rights activist, fiercely advocating for women’s liberation, civil rights, and socialist policies (in the deep south- no easy place to do so).

Notable Achievements: Nearly half a century ago saw the first female nominee in the Democrat party as well as the first black candidate to be nominated by a major party (but not the first African-American woman to run for the presidency- that honor goes to the Communist party’s Charlene Mitchell in 1968). Chisholm ardently fought for much of the expansion of labor rights, education, and welfare that Bill and Hilary Clinton would ruthlessly dismantle in the 90s.

Notable Achievements: Davis served as a major figure in the black liberation movements of the 60s and 70s and an activist against mass-incarceration (that Clinton aggressively lobbied for). Davis remains an iconic feminist and radical icon in the left.

Notable Achievements: The first woman to serve as both a senator and a congressperson, as well as the first woman to serve as either for her home state of Maine. Smith was additionally a vocal opponent of McCarthyism- the 1950s, as it turns out, was a time when Republicans were capable of calling out other Republicans on their fear-mongering bull****. And it’s MC Smith- not Clinton- who has the distinction of being the first woman (in a major party) to run for the office of president.

Notable Achievements: A current presidential candidate, Stein is the has vocally supported radical economic and social reform. Stein was one of the first elected advocates of gay marriage, a champion of renewable energy policies, and one of the few American politicians with the conviction to criticize Israeli policies and rights violations.

Notable Achievements: It’s one thing to run for president, it’s another thing entirely to run for president after having to build your own party from scratch. And yet that’s exactly what radical feminist Sonia Johnson did- creating the “Citizens Party” to unite a broad range of progressives and environmentalists, running on a Scandinavian welfare-state platform that we wouldn’t see again in this country until the Sanders campaign. 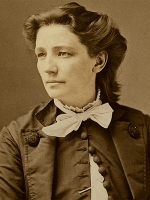 Notable Achievements: What better place to end than at the start of it all? Victoria Woodhull was the actual first female candidate in US history, Woodhull made the impressive feat of running for president at a time when women didn’t have the right to vote. Woodhull supported not only a feminist cause but one of the poor and working class, all while staunchly battling against the patriarchal culture of the day (eat your heat out, Madeleine Alrbight).

Now that you gotta admire.

All images retrieved fair use.