One of the Reasons Our Guest Writer Left Facebook: Not-Quite-A-Counterpoint About Online Opinions

We, and I speak for both Gordon and Kat when I say this, don’t often reference our guest posts, as much as we appreciate them. A large factor may be because any responses or rebuttals from the writers to our commentary, though welcomed [we’ve had our own back-and-forths before], are less likely to be written and featured . The reason I open with that is because of Casey Bennet’s post titled “Why I Left Facebook“, which was one of the inspirations for this post as well as being an article I didn’t like very much initially. 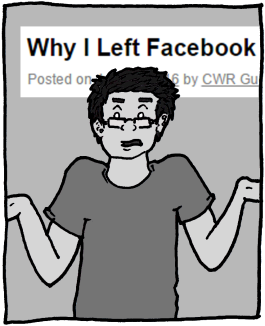 The reason for that was I felt it read more like a list of complaints, many of which could be applied to regular human behaviour.

To give credit where it’s due, he addresses any potential criticism
in his penultimate section “Life After Facebook“. Bennet states outright that many of the factors to him leaving “could have been avoided”; that he could have maintained his Facebook feed in a way that let him “[filter] out negativity and [focus] on what was actually beneficial.” He also points out that if that work is too much for you then it might not be worth, which is likewise extremely valid.

Of Bennet’s grievances against the social media platform what I’d like to focus on is the first, the very to-the-point “Opinions“.

The illustration made in that section is sitting in a coffee shop and having people yell their thoughts and perspectives into your face. He felt, and I quote, that Facebook was like “a barrage of opinions that I never asked to hear in the first place from people that I only kind of knew.” Note the words in bold.

I have my own problem with the internet as a whole, which is that when faced with opinions that I fundamentally disagree with [typically about race, feminism, etc.] I let it negatively affect me.  When faced with a thread full of like-minded individuals and no way of possibly responding to every one I’ll actually scroll through, searching for those who share my own viewpoint, chiming in myself only rarely [as far as self-care goes it’s not great]. I’ve spent the better part of an hour letting myself get worked up about what anonymous internet strangers are saying. The thing is, they’re anonymous internet strangers.

The difference between Facebook and, say, Reddit or some other forum is that you ostensibly share some form of personal connection with the people who appear in your feed. It’s why interactions on your wall between you and your “friends” never devolves into the cesspool that is YouTube comment threads-

-where some people literally go by their full legal names [thanks, Google+!] and don’t think twice about verbally going to town on others. Why would they care at all what the other person thinks when there’s absolutely nothing on the line? Not so with Facebook.

There has to be some reason that you haven’t simply unfriended these people, even if it’s simply because you wanted to keep tabs on their lives to ensure that you’re doing better than they are. Even that connection is just valuable enough for most of us to hesitate severing it.

That mild assurance provides comfort, which is in turn what leads me to attempt conversation with various people on my own Facebook feed who, let’s say, hypothetically share an article about how Trump is the best moral choice. Let’s also say that it may not have been hypothetical at all. Although that back-and-forth didn’t result in an outcome I would’ve liked it was still measured and relatively polite. We were both aware that people were watching, which was yet another motivation to remain civil.

This clearly isn’t true for everyone, as you might have guessed by the next section of Benent’s post being titled “And the Award for Best Dramatic Facebook Post goes to…“. That said, due to the way it’s set up Facebook may actually be a place on the internet where you’re actually more likely to engage in a reasonable discussion with another person about a sensitive topic.

After what has been a rough week that may just be me coming out on the other side with a burst of positivity. If my idea is one you want to run with, however, it would be good to remember a few things. For one, the fact that we cannot change the minds of people who don’t want them changed. Another is that there’s no rush; I spent several hours just thinking about whether I even wanted to comment on a shared petition asking the government to stop mandatory vaccinations. Lastly, that while potentially beneficial these conversations aren’t ones that you need to have. Don’t feel like you’re in any way obligated to start a conversation you don’t want to.

Not everything is for everyone, and Bennet clearly laid out why Facebook was not for him. In a world where everyone is online, however, being able to manage and engage with other people’s opinions is something we all need to learn to do, and the world’s most popular form of social media may just be the easiest place to do it.

Having gone through all that, a temporary break may always be a good idea, especially when faced with “Suggested” content [which may be too recent to have made Bennet’s list] like the following: