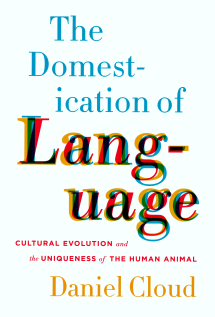 This week I finished The Domestication of Language: Cultural Evolution and the Uniqueness of the Human Animal, a book whose subject matter should be self-evident. Shortly afterwards I was given the opportunity to talk to Daniel Cloud, the author of said work and professor of philosophy at Princeton University.

To summarize it very briefly the book is a thorough and eye-opening examination of language as a piece of culture that has been grown and thus evolved due to choices and actions we’ve made as human beings. While our discussion of his work was incredibly thorough and actually exceeded an hour I’ve managed to cut it down to something that closely approximates a conversation, and one that I hope will convince you to pick up a copy for yourselves.

Evan: Now I will of course be putting together some form of introduction to preface this interview, but I thought it would be good for our readers to hear you describe yourself in your own words-

Cloud: I would say that I am an American philosopher carrying on the American philosophical tradition. I worked in science for a while in Russia and China which gave me some some experience with socioeconomic change; I was in those places during a period of upheaval. Research as a philosopher most interested me when I decided to quit and go back to school. Biology and evolution in particular stood out as I already knew a lot about the social sciences.

Evan: As far as The Domestication of Language: Cultural Evolution and the Uniqueness of the Human Animal is concerned I would describe your primary goal as breaking down the origin of human language. Would you agree with that?

Cloud: My goal was and is to explain where language comes from, yes, but specifically the theory of cultural evolution and if it works relative to language. Language is one type of culture, and the specific type of culture I chose to focus on in this book was words as they’re discrete identities that are easy to identify and track throughout history.

The larger project is actually to track humans as being distinct from other types of living things. To return to language I present it as a tool for exploring the way cultural evolution works. It’s the application of the word “domestication” as seen in the title, the theory that just like animals and plants what we have in the present day is very different from how it began. Words are only the first thing I’ve tried to identify in this way. I could just as easily have turned to fashion or clothes or any other kind of culture. END_OF_DOCUMENT_TOKEN_TO_BE_REPLACED

Do you know what an obstetric fistula is? I sure didn’t before I lived in Niger. It’s not really a term we hear often in North America. This is primarily because most of us have access to pretty great health care, but also probably because most of us don’t give birth before we are in our late twenties.

Nicholas D. Kristof, journalist and co-author of Half the Sky describes the situation of a patient with obstetric fistulas in an article he wrote called New Life for the Pariahs:

This is a childbirth injury, often suffered by a teenager in Africa or Asia whose pelvis is not fully grown. She suffers obstructed labor, has no access to a C-section, and endures internal injuries that leave her incontinent — steadily trickling urine and sometimes feces through her vagina.

She stinks. She becomes a pariah. She is typically abandoned by her husband and forced to live by herself on the edge of her village. She is scorned, bewildered, humiliated and desolate, often feeling cursed by God. END_OF_DOCUMENT_TOKEN_TO_BE_REPLACED