I’ve never thought much about language, at least not beyond trying to figure out what to say next. Even then I don’t really think things through. If you never had much of an interest in linguistics (like myself) it can come as a surprise when you start to learn about the basics of how spoken language works.

Here at Trois Pistole one of the French Teachers is a linguist and, incidentally, an anglophone. This gives him a lot of insight. As an English Speaker he has first-hand experience with the kind of mistakes we are likely to make while learning French. Then, as a linguist, he has a good idea of why exactly we make those mistakes. Luckily for us, he also hosts a phonetics clinic once a week to teach us the little details of pronunciation. Last week he focused on how French vowels work. The image I’ve included below is meant to represent where French vowel sounds come from in our mouths.

The French “i”, which sounds like an English “e”, is formed at the front of the mouth when the jaw closed (antérieure, fermée). In contract, the French “ɑ” comes from the back of the mouth and requires a wide open jaw (postérieure, ouverte).

END_OF_DOCUMENT_TOKEN_TO_BE_REPLACED

BC Girl in a Québécois World

Guess where I am right now?

That’s right, Quebec! (Sorry, you don’t get a prize because I already gave you the answer in the title of the post). 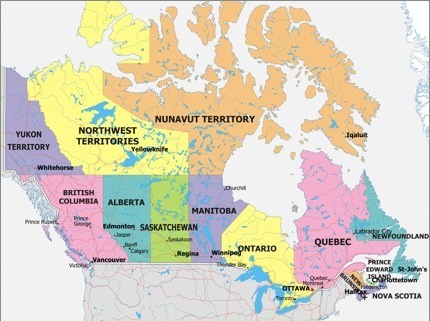 Look how far away I am from home!!

Those of you who follow the blog (or know me in person) will know that I live in British Columbia. Anyone who saw my excited Facebook announcement will know why I am here, but for anyone who didn’t, I want to give you an outline of where I am exactly and why.

This past year John and I both applied for a program called Explore. It’s a bursary provided by the Canadian government that pays for English students to experience French immersion (and vice versa for French students). The bursary covers room and board along with the cost of the classes, the majority of extra curricular activities and textbooks. Students just need to find their own way to the school they’ve chosen. The bursary covers a wide variety of schools; some provide a credited program and some do not. John and I both applied for the language program in a small town called Trois Pistoles. Since it’s pretty easy to find pockets of English in both Montreal and Quebec City, we chose somewhere small that would (ideally) force us to use French as much as possible.