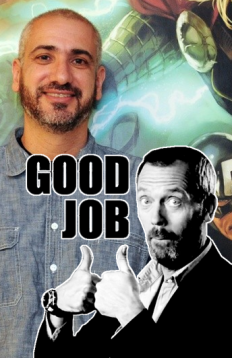 Gordon’s absence has forced me to dedicate yet another Fame Day to a man in the comic book industry [a post on a woman is in the near future] to join the ranks of Anka, McDuffie, and Fraction.

Introducing the Editor in Chief of Marvel Comics, Axel Alonso. Interviewed by FOX News Latino [which I didn’t even know was a thing], he was asked the question: “Is that a new initiative at Marvel Comics is doing? We’re going with the Latinos now?”

This question was in response to a few “new” characters appearing in the publisher’s titles, with Miss America being one of them. First featured in Marvel Mystery Comics #49 in November 1943, Miss America was originally another embodiment of the United States in World War II, a star-spangled powerhouse punching out Nazis. Now, in 2013, Miss America is the moniker for America Chavez, a Latina teenager and new member of the Young Avengers [one of Marvel’s bestselling new titles]. Also mentioned was the new Blatino Ultimate Spider-Man, who has already been covered on this site. 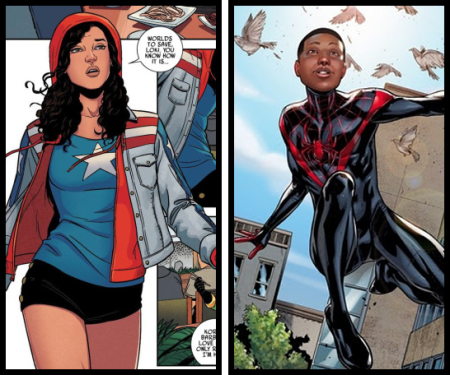 Alonso, a Mexican-American himself, replied:

“I’d be lying if I said I wasn’t motivated, on a personal level, to have Hispanic characters represented in comic books, but this isn’t some PC initiative, [this is] capitalism.”

He acknowledged that a growing range of people read comics, and that as a publishing company it is their “responsibility to make them feel included.” Going back to his comment about “capitalism,” the fact of the matter is that as a company it’s in their best interest to create a product that appeals to the fastest growing demographic in America. 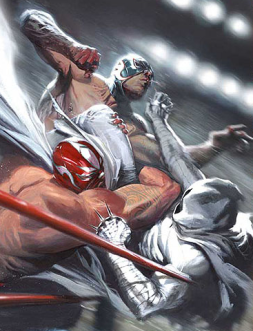 While Alonso agrees that comic books have not always treated minorities with due respect, he also acknowledges that stereotypes are more complex then they might first appear. He took part in helping to create Mexican heroes the Zapata Brothers, who were based on his cousins in Mexico. The two wear full luchador regalia, and while this may be perceived by some as racist, Alonso would argue otherwise. “Is that a little stereotypical?” he says, “Yeah,  but it’s also fun and a part of our culture.” Growing up watching these wrestling matches growing up they struck him as being an important part of his culture.

When asked why Latino characters haven’t achieved the same status and notoriety of heroes like Batman and Wolverine, his response was “Why haven’t they become that yet?” His opinion is that, with America’s ever-shifting cultural landscape, it’s an inevitability. You can’t force an audience, or simply make a character big, it just evolves and happens naturally.

Unfortunately, fellow member of “The Big 2” DC declined to be interviewed for this piece. While Marvel has its fair share of seemingly racist characters [Mexican villain/anti-hero Armadillo] DC has a large mark of shame in Extraño, a “gay Latino magician who had HIV and referred to himself as ‘Auntie.’” That being said, it’s a shame that they didn’t offer a means of looking forward through heroes such as Blue Beetle [Jamie Reyes] and Vibe [Paco Ramone] who has his own new title.

Alonso is a man who realizes that comic books are a business, and one that needs to make money and that has an impact on its readers. His joy that Miles Morales exists as a character is in “knowing that there would be a child out there who would see Spider-Man peel back that mask to see a different face and a face that resembled their own.” He understands that, and that’s worth giving him credit for.