It should be no mystery to you that the writers here at Culture War Reporters are not afraid to call out people, industries, or even activities when they’re clearly in the wrong. Heck, we have an entire Shame Day feature dedicated to that very idea.

They typically feature this little guy yelling at people.

In this age of internet anonymity I believe that it is especially important to call attention to people who are being sexist, racist, and just generally bigoted. Too often we forget that what we say online [or anywhere, really] is able to be recorded, and that we can be held accountable to those words. It’s part of the reason I dedicated a Fame Day post to a tumblr called Public Shaming, run by a man who screenshots particularly egregious tweets to showcase how truly reprehensible some people can be. Just one example:

I was going to embed the least offensive one, but seriously, they’re all pretty much equally offensive.

Not only that, but I also don’t believe that people whose work I have respected in the past are above reproach. I did not let Samuel L. Jackson off the hook for his behaviour towards VFX professionals at the Academy Awards, and I most definitely did not exempt Johnny Depp’s portrayal of a Native American despite the fact that I enjoyed Sweeney Todd.

Imagine how I felt, then, when regular reader [and friend] Marilyn showed me this site:

Summed up in the sentence “Problematic sh-t your favorite celebrities have done,” the site takes the famous and, without holding back, lists as many of their past offences as it possibly can.

This is not something I should have a problem with, yet when reading through the blog I couldn’t feel, and this is coming from me, that at times they maybe went too far.

I’m not a huge fan of One Direction, and was happy to see that they had a pretty extensive list, with sections devoted to each member of the group. I was pleased that the image tweeted on the right was highlighted, because it is hugely racist [take a closer look at the three smaller images on the right]. At the same time, the post also called out Harry Styles for throwing up a west coast gang sign, and Zayn Malik for getting an “appropriative Yin Yang tattoo.”

On that same note, GDragon, of the South Korean boy band BigBang, was accused of using blackface, which I do not think is okay even for a second. Right after that, though, he’s marked down as appropriating cornrows. Now I have seen cornrows on people of many different ethnicities, but never have I thought that this was offensive to Black people [or anyone else, really]. Similar to getting a Yin Yang tattoo, I mostly think of it as just being kind of dumb. 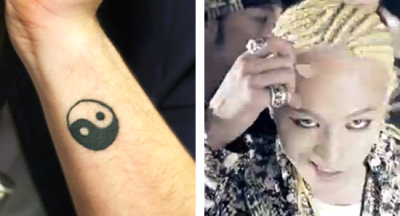 Do you consider either of these to be offensive?

I could also tell that this site went far beyond what I do to ensure readers are not offended [I try to keep this blog as free from profanity as possible], because they decided to censor words that I had to think hard about before deciphering what letters the dashes took the place of. Words like, and I’m not trying to be offensive by stating them, “gypsy,” “shemale,” and “Eskimo.” On that note, the fact that I even used the word “dumb” in the last sentence of that last paragraph could be seen as being ableist, as I am comparing something I find to be silly or inconsequential with a word used to describe those with a disability.

Don’t get me wrong, I understand why the three words I mentioned were censored. The question is, I suppose, where we’re supposed to draw the line. How sensitive are we supposed to be?

I am not a person who seeks to offend others. Since middle school I have worked hard to remove the word “gay” from my lexicon when it comes to referring to anyone or anything that doesn’t have to do with actual homosexuals. On that same note I have taken pains to stop using “rape” and “retard” in an offhand manner, though admittedly the latter crops up as an adverb from time to time. I would like to get to the point where I no longer offend anyone based on my word choice.

Hand in hand with my desire not to offend is a heightened sensitivity. It didn’t take much for me to notice and get on my brother’s case for using “faggot,” but I also now pay close attention to anything I watch for the way it portrays racial minorities and women. For the most part, I think that I’m one of the more sensitive people that I know, which is why it surprised me that, at times, I thought the site  was going overboard.

I truly believe that Your Fave Is Problematic is doing a good thing, and you can tell by the fact that they reblogged this response one blogger made to a fan of Misha Collins complaining that those who run the site weren’t getting the actor’s sense of humour:

Of course it hurts to see your favorite actors being linked to awful things, but we all need to wake up. Even really good people do bad things. It’s hard not to offend someone when you have an event that caters to so many people from all over the world, but you can still try. I don’t think this is about people being sensitive or butthurt at all. His innocent comments are making fun of who people are, huge parts of them.

A lot of the time its that they’re just like us. They weren’t exposed or they aren’t used to it or havent thought about it, or they don’t realize. The thing you need to know about this site is YOU DO NOT HAVE TO HATE THEM WHEN YOU SEE THEM ON THIS SITE.  You can share it with them write letters or emails telling them how you feel or why its wrong or why they shouldn’t do this in the future. It’s up to them to make the change but as a fan you can choose to tell them why it upset you.

So no, this is not bullying of misha, or anyone else. It’s making people aware that the people you put on a pedestal are not perfect, they do things that are wrong, they do cultural appropriating and racist things, and while we cant make them stop, we can tell them how it hurts us, as fans.

I admire and respect what they’re doing, especially in regards to how they’re speaking for transexuals and how negatively they’re depicted in the media. My worry, however, is that their message will be easily ignored by people who think they’re nitpicking. I am a person who is all for highlighting when celebrities [and people in general] do before they think, but if I have trouble accepting some of their judgements how much harder will it be for others? Are they too sensitive, or am I not being sensitive enough?

I’m not a fan of oversensitivity, but in this case is that better than the opposite extreme?

10 responses to “Offensiveness and Oversensitivity”