EVAN: Loved ones, we bring to you this week a special Valentine’s CWC that is very much in the spirit of the season. Similar to how chocolates and pink and red decorations began being sold in late January we are discussing the holiday, if you can call it that, well ahead of the actual date.

KAT: Yes, good old Valentine’s day. Or as I like to call it, Singles Awareness Day.

Before we started our official CWC I was telling Evan how I’ve spent the last few years of S.A.D. dressing in black to protest Valentine’s Day (and the marketing of love). Only last year my protest was ruined by John proposing to me. Go figure.

EVAN: So inconsiderate, that guy.

While I’m sure many people view S.A.D. as the bitter, single person’s response to February 14th, maybe you want to talk a little more about how you used it as a form of protest? I did mention in the intro how it all starts when the stores switch up their stock-

KAT: Since red and pink tend to be the colours associated with Valentines Day, dressing all in black can make you stand out a fair bit. Honestly, I knew it wasn’t going to make a difference to people around me making a Valentine’s Day purchase, but it makes a statement about how you feel about being single. Don’t get me wrong, being in relationship can be amazing (and has been for me), but I wanted to make it clear that a relationship isn’t necessary in order to have a fulfilling life.

EVAN: I want to say that even without Gordon this is a blog that can be down with a little bit of protest. We’re also not particularly fond of consumerism, so let’s focus on that regardless of the effectiveness of your past activities-

Is there an appropriate way to react to Valentine’s Day besides just not buying stuff? How about Christmas, which pushes that angle even more?

KAT: Agreed. I do love a good angle of protest, but, like I mention in my post on Christmas, marketers are selling goods successfully because they are tapping into something really, really appealing (i.e. I love Christmas). So we have to establish if these holidays are a problem in and of themselves, or if they are only a problem in the sense that they are often reduced to being “about stuff”. So I’m not entirely sure we need to boycott those holidays any more than we need to just choose to buy less stuff in our daily lives.

I should probably clarify, when you say besides just buying stuff, what exactly do you mean? Boycotting the holiday as a whole?

Just imagine the kid was trying to buy heart-shaped candies or something.

KAT: Yep. That’s true. I have to admit my views have changed on this slightly. I used to be quick to try to push people to stop buying completely, but I’ve started to realize that’s a somewhat unrealistic goal. So if I was talking to someone about purchasing something on Valentine’s Day I would just suggest buying something Fair Trade, especially since since chocolate and flowers are a some of the easiest Fair Trade and/or local products to find. So that’s the suggestion I would probably give to people planning to buy something anyways.

What about you? How do you feel about the products marketed to you on Valentine’s Day?

EVAN: Marketed to me? A young person who has not been in a romantic relationship for the past going on six years?

KAT: Haha, fair enough, marketed to couples. Does it bother you that you apparently don’t feel like a target of this marketing?

EVAN: It doesn’t bother me, though I think that would actually be a really genius idea, marketing Valentine’s items to single people. You could have an area that’s straight-up fun party stuff for groups.

Though at the same time, maybe just don’t bother?

I mean, sure, most of the people I know are married [and a lot of them have kids, too], but them having a day shouldn’t be any reason for me to be more bitter or alone than usual.

KAT: Haha. That would be a genius marketing idea. I would love to buy some “fun party stuff”, but I guess that’s a little too ambiguous to market. Maybe we should make a singles day and go from there.

I certainly get what you mean, and I appreciate that you don’t resent your friends who are couples, but you got to admit couples can be super annoying. I mean, I’m a couple and even I get a little irritated when people are super lovey dovey in front of each other.

Then again, maybe with Valentine’s Day being so commercialized we can just ignore the lovey dovey stuff the way we tend to ignore the other advertising too (as best as we can).

EVAN: There actually is a Singles’ Day, apparently. Very “popular among Chinese young people,” according to Wikipedia. It’s actually become really commercialized, too, much akin to Valentine’s.

That’s cool. What kind of merchandise is being sold?

EVAN: Well, there are sales regarding restaurants and karaoke, but there are also greeting cards made specially for the holiday. 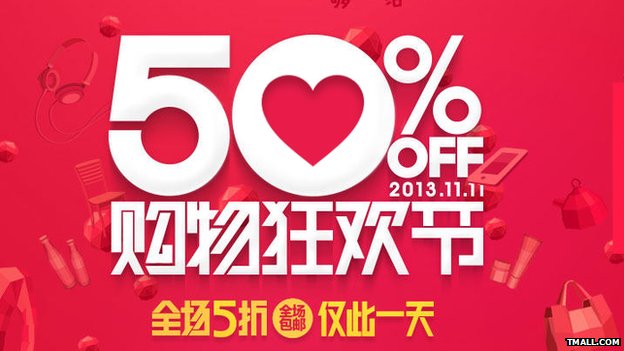 I can’t read this, but it’s for some kind of Singles Day Sale.

KAT: Love Karaoke! Guess there goes our fun party stuff idea. Alas, the millions we could have made!

EVAN: All we really need to do is popularize Singles’ Day [aka Guanggun Jie] in North America. That shouldn’t be too hard.

KAT: Yeah! Let’s do it. Sounds like a good time!

EVAN: And here I thought that finding a job was going to be difficult. I’m set for life now, I think-

KAT: Probably, seems like a foolsafe plan to me.

EVAN: And with that, ladies and gentlemen, I think it’s time we call it a night. We’d like to thank you for tuning in, and have even provided a poll for you to describe your opinions about Singles’ Day.

We were a little all over the place this time around, but Kat is somewhat swamped with school and I, well, I’m single.

KAT: And alas, there is only so much to say about Valentine’s Day. Or perhaps we missed something? What do you think?