Naked Ladies and the Balance of Power

Not so long ago a friend sent me an article called “6 Reasons Female Nudity can be Powerful” by Soraya Chemaly. He wanted to know what I thought of it.

To give you some context I should tell you that this friend and I have debated on issues regarding sexuality and nudity since we were teenagers. Back in high school we would have probably taken polar opposite stances on an issue like this. I was a fairly indignant teenager who wanted her gender to be taken seriously, and since he was a teenage boy and boobs held a certain appeal for him I didn’t think his opinion could ever be unbiased. While we continue to debate on these issues now and then, I think we are both coming to slightly less extreme, and maybe more realistic, perspectives. And when it comes to this article I have to agree with him. Female nudity can  be a powerful tool. 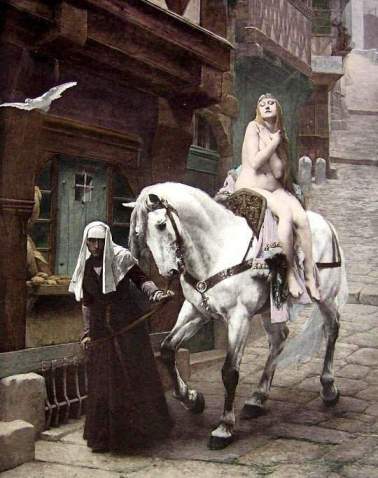 According to legend, Lady Godiva rode through town naked in order to convince her husband to lower his taxes on the people of Coventry. This rendition is by Jules Joseph Lefebvre

One of the strongest arguments in the article is the study of nudity as protest. Lady Godiva is perhaps the most well-known example of this, but Chemaly’s article lists several other examples [I tried to include the links from the original Salon article, but since several weren’t working I replaced them as best as I could]:

“Barbara Sutton’s excellent recounting of her experiences with naked protests in Brazil is chock-full of historical and analytical insights.  Women have regularly used their nakedness to protest corruption and exploitation that go along with  colonialism.  It’s among the most important reasons why Femen’s (topless) neocolonial narrative is offensive.  Prior to Tunisia’s Amina Sboui’s topless protest (after which she was arrested, subjected to a virginity test and fled),  Egyptian activist Aalia Magda (also in exile) posted pictures of herself naked to protest Shariah law and censorship. Last January, hundreds of women in the Niger Delta marched half-naked in protests against Shell Oil Company practices in their community.  This was a repeat of earlier and similar protests.  These were peaceful, unlike last month’s in Argentina when an estimated 7,000 women stormed a cathedral defended by 1,500 rosary-bearing Catholic men.” 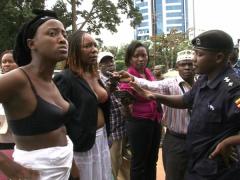 Uganda women in topless demonstration against police brutality in Kampala.

As Chemaly demonstrates with a far more comprehensive list of examples than I could have hoped to find on my own, nudity can be a powerful political tool for women, especially when so much of their political power has been stripped from them.

That being said, Chemaly also wrote an article called “Why Naked Pictures aren’t Harmless”, which focuses on how pornographic fliers are used by fraternities to condone, and even encourage, rape. At face value these two articles seem to be in opposition, but on closer inspection they actually serve to strongly complement each other.

When Chemaly writes about the power of naked women she isn’t talking about photoshopped pin-up girls. In fact, she takes a few moments to point out how the feminist activity group Femen may actually be perpetuating patriarchal standards by only including women in their protests who qualify as “hot”:

“Again, take Femen […] and focus on two things: a) their use of naked female bodies to express aggression and rage, and b) the fact that they appear to meet the requirements of Western, increasingly global, ideals of beauty. They are thin, young, tall, topless and almost all white…they pass the patriarchal f***ability test.   And so media eat them up. The same media that every day make choices about what not to show: models protesting racism in their industry; angry, anti-Catholic feminist crowds;  peaceful, determined, old Nigerian women.   That’s not Femen’s fault.  They certainly aren’t the ones making media decisions about what makes the news. Did they use this bias? Should women? “

Personally, I believe that women should not take advantage of this bias because it only serves to perpetuate a sexist culture and reduce women to objects. For many years now the woman’s body has been used to sell products through sex. I won’t get into that too much seeing how I’ve already ranted about it plenty in the The Problem with Pink and The Problem with Cute, but I will point out how messed up it is that in western culture it is more acceptable for boobs to appear for sexual purposes than for the nourishment of a child.

It’s the reason why female actresses are expected to appear naked on film in order to be taken seriously and why they are told to “accept that audiences have a right to see them – but not men – naked.” It’s also why actresses suffer a severe paycheck drop after 34 while men can expect a wage increase in their 50’s.

It’s why we recoil at the sight of pubic hair on mannequins but are blind to billboard after billboard of women in sensual poses.

It’s why Janet Jackson’s career ended with a wardrobe malfunction, while the man who stripped off her clothes got a massive career boost.

Female nudity is about power. When we make that nudity only about sex then that power belongs to men and marketers. And according to what is currently being marketed, that means women are only valuable if they have a certain look and are under a certain age. But when that nudity is about whole, flawed, human individuals stripping down for a purpose bigger than arousal and marketing, then I think we start to take that power back.

So yes, female nudity is powerful, but who are we currently giving that power to?

7 responses to “Naked Ladies and the Balance of Power”