I have to admit it. We had a Super Bowl party at our house. By Super Bowl party I mean we had some friends over and John watched the game while the rest of us chatted and ate food and had fun, then when the commercials came on we would all quiet down and turn up the volume.

While there were, of course, a few “ugh” commercials, most were pretty good.
One that really stood out was this year’s GoDaddy commercial. For those of you who haven’t seen it, it featured this woman quitting her job in their commercial, since she knew her boss would be watching the game.

Gwen Dean says “I Quit” to her boss as she publicizes her plans to become a puppet master.

Setting aside the wisdom, or lack there of, of quitting your job in front of a heck of a lot of people, this ad really stood out to me. Partially it’s because of how starkly it juxtaposes against this last few Super Bowl commercials. You know which ones I mean. 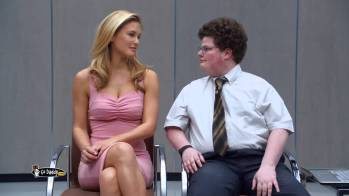 It also caught my eye because I had heard about how the #notbuyingit movement was targeting GoDaddy to change their sexist advertising tactics. Like the video below explains, over the last few years people began to ask why companies like GoDaddy were creating such sexist commercials for the Super Bowl, when about half of viewers are women and girls. So they started to use Twitter to “talk back” to advertisers they were “fed up with”.

And here’s the crazy thing: it’s working. Not only did GoDaddy feature an empowered female entrepreneur in this year’s commercial, but Volkswagen also issued this response to the “not buying it” hashtags aimed at their Super Bowl commercial. Since their advertisement featured the saying “Every time a Volkswagen hits 100,000 miles a German Volkswagen engineer gets his wings” some members of the #notbuyingit movement decided to remind VW that women can be engineers too. In response, Volkswagen released a short version of the commercial where a female engineer got her wings.

While not all of the commercials with sexist content issued a response to this year’s #notbuyingit tweets, it’s still pretty amazing to see social media opening up a dialogue with advertisers and changing the way advertising works.

It’s also gotten me thinking about how the evolution of the internet is changing the way advertising works.

But in spite of all that I’ve been noticing a trend in advertising that I’ve really been liking. It has also made me question myself for liking it. I noticed it first in this Guinness commercial.

Then later in this Everlast Boxing ad.

It just feels so… uplifting. Like an emotional scene in a movie or book, it gets you just a little bit teary-eyed. It also feels somehow… good.

And now, with the way advertising is responding to feminist “moral police” on twitter, I’m starting to wonder if advertising could begin to reflect and even promote some higher moral values. The only thing is, they’re still advertising a brand, so I’m not so sure. Can “moral” advertising really be possible?

Either way I’m excited to see companies listening. So good job, members of the #notbuyingit campaign for protesting the way advertising uses women. And cheers to the companies who are taking heed. There’s change on its way, and while I don’t know what that means, I’m getting excited.

*If you are interested in joining the #notbuyingit movement you can find out more here, at missrepresentation.org