I don’t own a smart phone, and as a result I do not have Candy Crush Saga. I own a dinky little Samsung slider phone which is complete with six game demos, from WPT Hold ‘Em 2 to The Sims 2. My all-time favourite is Block Breaker 2, and I can’t count the number of times I’ve broken those blocks on the only available level over and over and over again. I’m easy to please, is what I’m saying. Also that I’m not in the target demographic here.

Many of my friends are, though; their enthusiasm for this confectionery-based game has seemingly no bounds. I get it, too- puzzle games are fun. Puzzle games that feature the too-sweet treats that you ideally want in your mouth doubly so. I don’t personally have anything against smart phone games candy-based or otherwise, what I have a problem with is greed and theft. 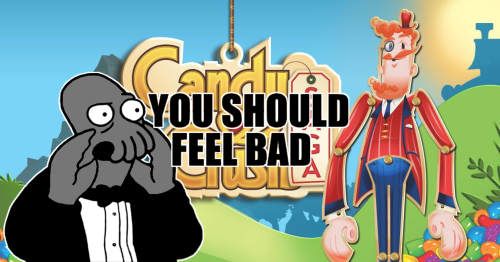 Those are some strong assertions, so I should probably explain. Five days ago I stumbled across a particular image on imgur [which fills me in on more news than I care to admit] titled “I never played Candy Crush and i never will…(worth a read)“. It was a screencap from http://www.candyswipe.com, in particular an open letter that its creator, Albert Ransom, wrote to King.com, the website/company responsible for Candy Crush Saga.

See, King had been meaning to cancel registration of the CandySwipe trademark. How ridiculous that is should be apparent just by taking a look at the image above, which makes it clear how the game predates Candy Crush Saga [and any iterations of the game, in fact] by two years.

I want to take a brief moment to point out that “…the game was made in memory of [Ransom’s] mother, Layla.” Furthermore, the road to the game’s creation was by no means an easy one, and he explains that:

“I have spent over three years working on this game as an independent app developer. I learned how to code on my own after my mother passed and CandySwipe was my first and most successful game; it’s my livelihood, and you are now attempting to take that away from me.”

This man’s deeply personal struggle aside, which I’m one hundred percent behind, let’s take a look at the open letter that Ransom’s was in response to, this one by King CEO Riccardo Zacconi. He has some things to say about intellectual property:

“At its simplest, our policy is to protect our IP and to also respect the IP of others.”

“We believe in a thriving game development community, and believe that good game developers – both small and large – have every right to protect the hard work they do and the games they create.”

“Before we launch any game, we do a thorough search of other games in the marketplace and review relevant trademark filings to ensure that we are not infringing anyone else’s IP. We have launched hundreds of games. Occasionally, we get things wrong. When we do, we take appropriate action.”

If you think that Zacconi and King are the villains here then I need to stop you really quick. You don’t know the entire story. You see, both care so much about Candy Crush Saga that they have actually trademarked the word “candy” in Europe [solely for games, obviously]. There have also been motions to do the same with the word “saga” which is hilarious if only because it’s such direct mimicry of IFIB’s actions against the SSFA [check my review of Farmed and Dangerous for context]. What I mean to say is that Zacconi and King are not villains, but supervillains of the worst kind.

While people fighting back against King’s maniacal dictionary domination [see the link on trademarks above] is encouraging, not all is well for Albert Ransom and CandySwipe. Not only are people calling his game the knockoff-

-but after he took legal action against the company, rightly indicating that customer confusion was damaging his product, the opposing company decided to fight even dirtier. Since Ransom’s game was clearly from 2010 what King resorted to was buying a trademark to the 2004 game Candy Crusher. The intent of which was to use this older trademark to shut down CandySwiper.

I’m going to create some stark contrast here by reminding you all that Dong Nguyen, the creator of Flappy Bird, took the game down himself. This is after making $50,000 a day. With that in mind I want to assert that Zacconi and the other higher-ups at King are bad people, and that they should go home and rethink their lives.