EVAN: Gordon’s always been better at the fancy introductions, so I’m going to start by saying that this all began with this image- 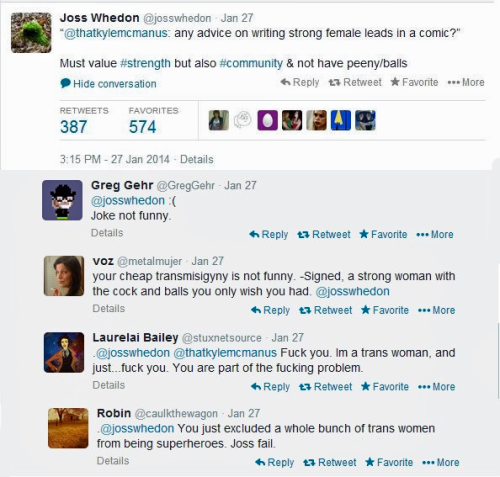 See the rest of the image here.

– in which trans women [as well as a few others, I’m sure] tear Joss Whedon apart for answering a question about writing strong female leads with a joke. The problem being, of course, that the joke was trans-exclusionary.

This of course could be expanded into all jokes being trans-inclusionary, at which point Gordon had something to say about the number of trans men and women out there-

GORDON: Current estimates, for the US anyways, are holding at roughly 700,000, give or take, making up just about %0.3 of the population.

As Evan and I discussed in our first reaction to the outcry surrounding Whedon, this places people identifying as transgendered at somewhere above the number of folks hit by lightning and lower than the number of people born with more than five fingers on a hand.

Istvan, “The Accursed Albino”, a member of a traveling freak show.

EVAN: This of course led to me thinking about superheroes and comic books, my medium of choice when it comes to discussing representation. One of us made a crack about the number of albino crime fighters out there, which brings us to our topic for today, which is on minority representation in general.

GORDON: To summarize, we agreed that the trans population, while unquestionably subject- both in the past and present- to abuse, prejudice, and attacks, seem to be confusing true transphobia (I’m pretty sure that’s a word) with just a general lack of awareness due to how small they are in number.

For example, my not showing any trans characters on my sitcom probably isn’t a result of me being transphobic, but rather trans people not being such a major part of the population as to merit their inclusion. Though of course, that begs the question of “how large does a group have to be to merit attention/representation in popular media?”

Evan, the American-Asian population currently stands at approximately 4.5%, and it’s a subject you’ve touched on repeatedly. Any thoughts or gut reactions?

(It’s because this was an insanely fast reaction…)

EVAN: Oof, gut reactions. That’s actually really tough, because while I constantly tout the fact that there aren’t enough Asian characters in almost anything, I believe I’ve thrown that exact statistic around on this blog before.

I’d like to posit the fact that American media is far-reaching in scope more than that from any other country, but of course the problem there is that what matters first and foremost is that Americans watch it.

Gonna be honest, man, I sort of don’t know where to go with this in a way that I’m comfortable with.

GORDON: Alright then, that kinda leaves us in a rough patch. Is there any rule of thumb you can think of that’d apply here? Must be at least X in 100 Americans to qualify reasonably?

I know it sounds harsh, but I could start raising my own banner and demand to know where are the socialist characters are on TV.

These words mean nothing to like, 90% of the world’s population…

EVAN: Before I can answer that I think I need to ask what the course of action to take would be after finding this magic number. Let’s say that, and I know this is far from true, 3% of people are handicapped, the wheelchair-kind. Does this warrant a single wheelchair-bound character?

One thing I’ve read on a number of forums, and that I agree with, is that having a single minority character causes them to represent that minority, for both members and non-members alike. Take for example socialists, which you mentioned. There’s only one and he or she is a villain, or a hero with some sort of contemptible flaw, then what?

GORDON: That doesn’t really answer any questions though, does it? Especially not in regards to transgendered people, who will probably still make up an especially small minority in any nation.

EVAN: There’s been a lot of talk about comic books needing more transgendered heroes, which I more or less balked at because I asked myself “How many do we need, really?”

The issue with having only one or two is what I’ve already presented above.

So I guess what I’m continuing to ask is does the number of characters have to be proportional to the minority they are a part of?

GORDON: An idea that also crossed my mind.

We generally want media to be representative of reality, but that doesn’t mean just having 5 Asians for every 100 characters shown on a TV show. A show set in an upper-class Midwestern city is probably going to be predominately white. A show in a middle or working class area of some town in the Southwest, on the other hand, is going to have a much higher mix.

So the question would be, what demographic do transgendered people typically fall into?

Something we mentioned in our discussion of the portrayal of homosexuals on TV is that, according to statistics, homosexual couples tend to be more upper class.

EVAN: At the very least, I think most larger urban centres [ie. cities, I guess I could have just said that] would be more likely to be accepting of their lifestyle.

You are right, though, in that to a point our media has to reflect real life. With that in mind, a show with more than one transgender character might be- would be- super jarring. The flip side of course is having a program devoted exclusively to that particular minority. See: HBO’s Looking, a sitcom featuring three gay male protagonists, or Mighty Avengers, a title which is predominantly Black and Latino heroes.

In other words, one way to ensure representation of minorities is to always lump them together in their own thing.

GORDON: I wouldn’t say that- after all, shows are most realistic, I feel, when they follow life in being just off-the-walls crazy. I’ve traveled enough of the world to realize that it certainly isn’t impossible that you’ll run into a transgendered zealously Catholic beet farmer.

Still, all things in moderation, I guess. I know I’d feel offended if my own subset (whatever that may be) was being included in something only as a token character.

EVAN: So would you say there’s a line before we get to the point where shows approach some sort of Glee-esque rainbow of flavours [the show features a pretty broad range of minorities]?

GORDON: I’d say it exists, but I couldn’t say that I’d be really able to recognize it until it was crossed.

EVAN: Regarding comic books again, I think it’s interesting when a piece of art appears to step past that boundary, like in the critically-acclaimed Young Avengers:

It feels unrealistic, but at the same time it could still happen, right?

EVAN: We’re winding down on time, so how about we go back and forth when it comes to where we think representation could use some improvement in today’s popular media-

EVAN: You actually hit on that in your post on Christians and how they’re portrayed, and I’d like to back that up by saying how great it would be to have a deeply religious South Korean churchgoer [there are many].

Don’t Trust the B—- kind of had one in Pastor Jin, but that show skirted the edges of reality so often I’m not sure it came off like it was supposed to be believable on any level.

Here she is post-plastic surgery.

GORDON: “Geek” culture springs to mind. Something more realistic- regular people whose hobbies/interests include science-fiction, comics, and fantasy- not that viciously repellent blackface routine The Big Bang Theory churns out.

When it comes right down to it, though, I think it’d be cool to see people doing jobs other than forensic specialist and ambiguous office work.

EVAN: Our talk about how calling TBBT “nerdface” is not only wrong but offensive is going to have to wait until another time, but moving forward-

Seeing young people struggle financially and occupationally would be great. 2 Broke Girls started out cataloguing a lot of the different, desperate ways to earn some cash, but it’s so far from that presently it deserves a different name. That’s what the 21-27 demographic is going to really connect with, I think, and the lack of focus on that struggle makes them a minority I think.

GORDON: And with that, we’re out of time for today. As always, comments, thoughts, and links to pictures of dinosaurs are always welcome.

Ladies, gentlemen, people who would not choose to define themselves, or would choose to identify with alternative identities, good night.

EVAN: Or good morning, y’know, we have no idea when you’re reading this.

Definitely do let us know any other thoughts you might have about representation of minorities in general [not just trans people, though we definitely turned to them as an example a lot]. And thanks as always for reading!