Two nights ago I posted an article to our Facebook page that listed tweets in response to some sort of White Man March. My first reaction upon coming across it for the first time, as I think most most people’s would be, was not so much what is this as why is this. My second was to ascertain that the tweets were in fact funny so that I could share them on social media and use them as a hook to create discussion [which they did not, but what are you going to do].

In coming up with today’s Shame Day post the march came to mind, but it dawned on me that I knew literally nothing about it besides the fact that the internet thought it was ridiculous.

I did what I consider to be the bare amount of research possible and determined that, yes, the White Man March is indeed worthy of its own Shame Day post.

Let it be known that I listened to the entirety of the 11-minute YouTube video organizer Kyle Hunt put together as an FAQ for the White Man March. This is the sort of sacrifice I’m willing to undergo for you.

Look, between that last paragraph and this one I began listening to the video, and what became bemusement quickly turned to outright rage. This post is going to take a vast tonal shift right this moment.

Now understand that I would never waste a Shame Day on a person or movement that was simply misguided or wrong. People are wrong every day and no matter how much I try there is nothing I can do about it. Every now and then, however, someone comes along whose ideas are so . . . so . . . stupid. I realize I’m resorting to ableist language but none of these opinions or beliefs appear to have any modicum of intelligence. I read through them and . . . and . . .

Kyle Hunt’s first answer as to what this march is ends with the following sentence, emphasis mine:

“The purpose is to spread information through activism, but also to make a statement that White people are united in their love for their race and in their opposition to its destruction.”

It’s not even just that he thinks White people are being picked on to the point of elimination, it’s that they’re disenfranchised too [I’ve disabled the links because they lead to other sites no part of me wants to support]!

Excuse me, Kyle, while I-

Dude, you literally disgust me. I want to tear apart your words but that would imply me having to touch them. No, you know what, flooded with ****ing “hordes of every different race under the sun”? I realize that you probably wanted to hold your racist card a little closer to your chest but you are waving your wallet around.

Here’s the kicker, it’s not even a “boo hoo woe is me” sentiment, it’s that White people are being so bullied that it’s genocide.

“We will make it clear that we will not sit idly by as our race is discriminated against, mocked, displaced, and violently attacked, all of which amount to White genocide, according to the United Nation’s own definition of genocide. This is why one of our big messages, which will be displayed on many large banners, is “DIVERSITY” = WHITE GENOCIDE. These banners will spread the message to the public at large in the most effective way possible. This “diversity” agenda is being directed at White countries (and only at White countries) with various programs to ensure that there are less White people at schools and in the work force, which is unfair and discriminatory, taking away money and opportunities from the indigenous White people. “Diversity” is a codeword for White Genocide.”

At this point I feel it only right to apologize to Mr. Hunt, if only because these constantly taking the time to express my emotions is somewhat impolite of me. I’ll get back to you in one second, sir-

Genocide, dude? Yeah, I get that you’re tapping into the UN definition, but genocide? I want to find a gif or image that encapsulates the horrors of what that truly is but I feel like even embedding it in the same post as your words would somehow lend them even a hint of validity. No, an Asian girl insisting enough is enough, Will Ferrell vomiting, and cartoon tears all sum up well how I and anyone else should feel about what you’re saying.

I’m done giving his words any kind of platform, I think we’re good. If you’d really like to check out the rest of them without hearing his voice bore a hole into your skull you can check them out here, just make sure to keep a stress ball or paper bag close at hand.

The reason I wrote this post and spat my venom [which is more Gordon’s deal, we all know] is because these ideas aren’t just wrong, they’re harmful. In no way am I saying that White people aren’t allowed to take pride in their racial and ethnic identity, what I am saying is that believing they’re getting the short end of the stick is FALSE. I shouldn’t have to go into why that is. Here’s a tumblr post to rest the eye-

When I was a lot younger I saw my cousin wearing a “Straight Pride” t-shirt, and at the time I thought it was funny and considered getting one. Years later I understand what’s so problematic about them. It’s the implication that your orientation, the one that is the majority and has never worked against you in any way ever, is worthy of touting to the world. You’re already in the express lane of life. Both that and this White Man March are like a group upset about disabled people getting all the attention [“SUPPORT THE ABLE-BODIED!”].

That’s why people are viewing this expression as racist, because it appears to equate the struggle of the White Man with that of the Black Man. I mean, it can’t possibly be true that this guy doesn’t believe that White people have civil rights?

“This is an honorable struggle for civil rights, which White men currently do not have.”

I want to end with two more points as I try to scale down the rage threatening to overcome me. The first is that for a brief second I actually thought that this was all some sort of elaborate prank, because who should I see quoted in the sidebar of the site hosting the White Man March FAQ [which I’ve already linked to above] but Joseph “I’m A Nazi!” Goebbels. Then I scrolled around and saw that the site, which to be fair I don’t think Hunt is affiliated with, just drips with pure, unadulterated antisemitism. This. Is. Hilarious.

“We will also be showing that the old stereotypes about pro-White activists are false. The media would like our people to believe that pro-Whites are all Klansmen, Neo-Nazis, Skinheads, and the like, which discourages many White people from becoming advocates for their own interests.”

Lastly, in his interview with VICE [conducted via email, as he refused to speak over the phone], Kyle answered a question regarding whether or not he was “advocating for racially homogenous countries,” to which he said [emphasis mine]:

“I am not advocating for the United States to be 100 percent White, as other races have legitimate and historical claims to this country, but I do think we should protect our borders and not allow amnesty for millions of illegal immigrants, as this undercuts the labor of poor Whites, poor Blacks, and all other unemployed (or underemployed) Americans.”

To which I can only respond with: 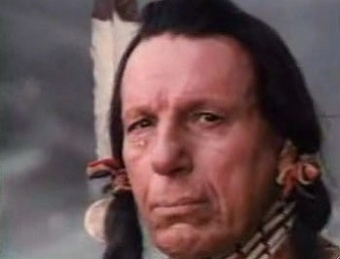 He weeps at Hunt’s graciousness.

Everything that Kyle Hunt and the White Man March stand for are harmful to us as a culture and as human beings. It perpetuates a belief that those who are already on top are not only being kicked around, but that their struggle is, and I hate to even quote the comparison, tantamount to the wholesale destruction of a a racial group. I almost don’t care that the march was a resounding failure [it does bring joy], what I can’t get past is that these ideas exist and that people are actively trying to spread them.

I would say shame on Kyle Hunt, the White Man March, and anyone connected with either if I thought that “shame” were powerful enough a word. Now excuse me as I go decide whether to vomit again or flip a table.