Right at the end of 2011 Todd VanDerWerff, who I unofficially inherited these reviews from after Pilot Viruet passed the torch, wrote an article on the AV Club discussing how some shows on TV existed as “Nice places to visit”.

While the initial focus was on dramas he turns to sitcoms and describes how he divides them into two categories: “shows that aim for greatness and try to push the boundaries of the form, and shows that just want to create a bunch of characters that are fun to hang out with.” Happy Endings is my personal benchmark for the latter, with Parks and Recreation coming a close second. It’s not to say that neither show exhibits good writing [both do, in their own ways], more that they’re half hours of television in which viewers can relax, content to spend time with characters who are familiar and comfortable to them.

2 Broke Girls appears to want to be one of these shows.

The funny thing about this is that a mere thirty minutes before we join Max and Caroline for more of their latest financially-challenged escapades CBS’s most popular sitcom, an impressive hang-out show in its own right, takes centre stage. When compared to How I Met Your Mother it really isn’t much of a contest.

Where 2 Broke Girls feels necessary from time to time to remind us that Max and Caroline’s co-workers do in fact support Max [“And the First Day of School”] How I Met Your Mother keeps all five of its main cast constantly interacting with each other [in pretty much every episode]. In the former the actual hanging out feels like a reminder, not only that the other characters care but that they exist; the latter has them interact organically to the point where it feels awkward to pull it apart describe it in this many words].

It’s not impossible for a show surrounding a primary cast of two [I’ve said it once and I’ve said it again, the girls are really the only ones driving the action] to be a hang-out sitcom, only that it makes it more difficult for us as an audience to react to them on that level. It’s easy to enjoy watching a group of friends enjoying each others’ company, but viewing two people can make you feel like a third wheel of sorts. So much one-on-one screentime and interaction inevitably creates some form of mild intimacy that I don’t personally want a show to be solely comprised of- like if The Office had been primarily Jim and Pam, or if Community revolved around Troy and Abed. This particular sentiment definitely isn’t true for everyone, so let me on and discuss how Han specifically holds the cast, and entire show, back.

This week’s episode is a celebration of St. Patrick’s Day, a holiday that apparently guarantees Han Lee a 100% chance of getting laid. While it’s a well-known fact that Asian men are not positively portrayed in the media when it comes to their sexuality the fact is that he gets the short end of the stick [not a pun, I swear] more often than not. “Is Han even a man?/Han is not a man” is the vast majority of dialogue concerning the character summed up in a few words. All that being said I was interested to see how this would work out for him.

About as well as I expected, it turns out.

Dressing up as holiday-appropriate mythical creature Lepre-Han is swarmed by women at the pub the gang heads to; for some reason that I can’t fathom Caroline can’t find it within herself to refer to them as female [“with all of those . . . I wanna say girls”]. Most of them are quite young and pretty, so of course Han initially opts for a “buxom paralegal” who “brought outside chicken”. That may sound appealing, but she’s not the most traditionally beautiful, if you get my drift.  He ultimately ends up going back to a woman’s “sister’s condo in Jersey City” where the two of them will have to be quiet. 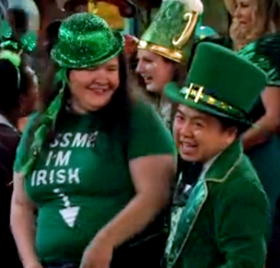 It’s not enough that the woman’s entrance [seen on the right] is punctuated by the live audience’s laughter], Max makes a prophecy about their night together saying that it “Looks like they’re going to be unlucky tonight.”

Han finally sleeping with a woman is not heralded with even a fraction of the woos that Sophie’s appearances garner, but is instead met with laughter. Han is a joke because he’s short, bossy, and ineffectual [we’ll leave the uncomfortable racist humour back in Season 1] and, as a cherry on top, he ostensibly cannot gauge whether a not a woman is physically attractive.

It’s not so much that we can’t have a character like Han, it’s that when a show takes said character and treats them a certain way it cannot attain that title of “hang-out sitcom”. Who was the butt of every joke in Friends? Was it Phoebe? Ross? Chandler? Monica? Joey? Rachel? Each one had easily mockable traits [except for Ross, because being a paleontologist is awesome] but were never reduced to them. They didn’t constantly lose in every aspect of life.

That’s all to say that if 2 Broke Girls wants to get there, to create a space where we can truly enjoy being around this group of people as a whole, at the very least Han needs to be handled differently.

Almost a thousand words in and I haven’t even really touched on what happens throughout the episode, which makes me feel like I’ve adopted more than just the burden of reviewing this show from Todd VanDerWerff. Allow me to do so in one long-ish paragraph and also apologize for overanalyzing a show that I’ve admitted to catering to the lowest common denominator and expecting more out of it. Tune in next week where I will be judging it on its own merits, as usual!

What takes place is yet another episode where Caroline comes to understand that her new life is better than her old one. After a rather unpleasant time at the pub the blonde opts to take the extra money they made selling Guinness and Irish cream cupcakes and take Max to The Plaza where they can drink Bellinis in peace. There she realizes how boring it is and they return to where all the fun is. To keep it from taking up too much of the Stray Observations Caroline is kissed several times on the mouth by an overly friendly drunk nicknamed Blarney Bill which is, suffice to say, probably an all-too-real occurrence for women on this holiday and as such doesn’t work as a joke for me personally.

The Title Refers To: Kilts, St. Patrick’s Day, y’know. Earl wears one as well. I don’t think the play on “guilt trip” plays out in the episode at all.

“I think I’m gonna need some water. I need to drive a school bus in four hours.”