Jian Ghomeshi vs. The Women: 4 Reasons Why Liking Q Isn’t a Good Enough Reason to Defend Him

There’s been a lot of big news Canada over the last week. On Wednesday, a mentally ill man shot and killed Cpl. Nathan Cirillo, a soldier who was guarding the National War Memorial, before storming the Parliament building. The shooter, Michael Zehaf-Bibeau, was then shot by 58-year-old Sergeant-at-Arms Kevin Vickers, preventing any more casualties.

According to CBC’s sources, Vickers “dove to the floor around the pillar [where Bibeau was shooting from], turning on his back as he landed and simultaneously firing his weapon upwards at Bibeau”. Pretty impressive for an almost-60-year-old.

Yet the story of Cirillo’s death and Vicker’s heroism was quickly pushed aside when the news about Jian Ghomeshi hit.

When John and I first heard that Ghomeshi was going on leave we didn’t think much of it, and both said, “Well, we know he isn’t going to get fired. People love Q.”

We quickly learned that Ghomeshi wasn’t just going on leave, he was let go. Not long after that initial news was released, Ghomeshi made a statement on his Facebook page outlining his “side” of the story:

“I’ve been fired from the CBC because of the risk of my private sex life being made public as a result of a campaign of false allegations pursued by a jilted ex girlfriend and a freelance writer.”

In his 1,500 word monologue he explains that he had enjoyed rough sex with this “jilted ex”, even comparing himself to the character from 50 Shades of Grey. He insisted, however, that they had used “safe words” and “regularly checked in with each other” to make sure both parties were comfortable. He says that when he finally decided to end the relationship this woman became jealous and started to peddle a smear campaign against him:

“It came to light that a woman had begun anonymously reaching out to people that I had dated (via Facebook) to tell them she had been a victim of abusive relations with me. In other words, someone was reframing what had been an ongoing consensual relationship as something nefarious… Someone also began colluding with a freelance writer who was known not to be a fan of mine and, together, they set out to try to find corroborators to build a case to defame me. She found some sympathetic ears by painting herself as a victim and turned this into a campaign.”

It’s hard to read his Facebook speech without agreeing that he seems to have truly been wronged, so it’s not surprising that soon after his post, fans of Ghomeshi and his show flooded to his defence all over social media. Currently, his Facebook statement has 109,842 likes,  41,254 shares and 29,976 comments, some of which I’ve included below. 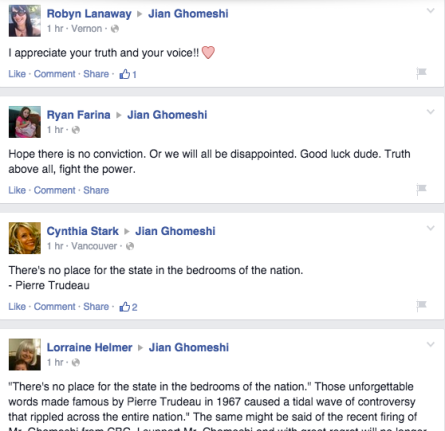 Sorry for the poor quality. Feel free to pop over to Jian Ghomeshi’s Facebook page to check it out for yourself.

Before we all join the “save Ghomeshi” bandwagon, there are a few things that might be worth considering-

Somehow we still seem all too happy to accept the suggestion that many victims are willing to lie about sexual assault in order to get attention, despite constantly encountering statistics that demonstrate the opposite*.

*Many of the academic studies that have been published regarding the rate of false accusations of sexual assault are hard to access in a non- academic setting (you need a password to read most academic journals), but Wikipedia does provide links to several of these studies in their reference section on this topic.

Unfortunately, this common idea is what creates an environment where women can’t tell their stories out of fear. The danger of the “false accusation myth” is evident even here in the Ghomeshi case, where none of Ghomeshi’s accusers are willing to put their names forward, fearing the social consequences. The moment their identities are known the spotlight will shift: it will no longer be Ghomeshi who is on trial, but the character of each woman and the plausibility of her testimony.

If you are not sure what I mean, check out one of the many attacks that have already been made against Carla Ciccone, the young writer who wrote about her very uncomfortable date with an unnamed Canadian celebrity fitting Ghomeshi’s description. Warning, there’s some harsh language in the video below.

If the fear of social stigma and online harassment isn’t enough, the low rate of conviction for assault it enough to discourage many women from bothering to pursue the time consuming, and often painful, process.

As you read articles about the case, take a look down in the comments. In every article I’ve read about it I’ve come across comments about Ghomeshi from local Toronto women sharing things they have seen, heard, or even experienced first-hand. Many of the things they’ve said sound something like this:

Surprised to see women from Toronto on my timeline who *didn't* know that Jian Ghomeshi was a creep. Thought it was an open secret.

The rough sex community wants nothing to do with him

“The three women interviewed by the Star allege that Ghomeshi physically attacked them on dates without consent. They allege he struck them with a closed fist or open hand; bit them; choked them until they almost passed out; covered their nose and mouth so that they had difficulty breathing; and that they were verbally abused during and after sex.

A fourth woman, who worked at CBC, said Ghomeshi told her at work: ‘I want to hate f— you.'”

Newspapers were actually pretty careful about publishing this story

When independent investigative blogger Jesse Brown received this information about Ghomeshi he didn’t publish it right away, because he immediately knew it would be followed with a lawsuit. He knew being sued would threaten his small, but growing, program and possibly threaten the privacy of the women who had spoken to him, so he took the information over to the Star. Then, even at the Star they didn’t publish the information they had compiled until after Ghomeshi made his public statement. Since Ghomeshi made the decision to very publicly share his side of the story, it only seems fair that his victims should have a platform to share theirs.

Think women who make public accusations of assault want some kind of notoriety? Maybe they just want other women to know to avoid this man

I’m not asking you to “pick a side”. What I am asking, however, is that you don’t immediately dismiss these women just because their testimony threatens the status of a public figure. It doesn’t matter if you loved his show or think Jian Ghomeshi seems like a nice guy, we cannot afford to dismiss these women as a group of liars. As Owen Pallett recently demonstrated in his Facebook response to the Ghomeshi story, it is possible to like a person and still acknowledge when they’ve done something wrong.

But if we do decide that liking Ghomeshi means discounting those women, then we should also remind survivors everywhere that we probably won’t believe their story either.

6 responses to “Jian Ghomeshi vs. The Women: 4 Reasons Why Liking Q Isn’t a Good Enough Reason to Defend Him”