Why Men Need Feminism Too: On Shia LeBeouf’s Rape

A couple weeks ago I wrote a post about how quick we seem to disbelieve rape victims when they share their story. Specifically, I was referring to the Jian Ghomeshi case, when the fanbase actually increased after he was initially accused of sexual assault. People rushed to show their support on social media because they they believed that his accusers were lying.

Although those fans were also very quick to jump ship when more and more women stepped forward to accuse Ghomeshi.

Recently, another claim of assault has sprung up in the media, and once again, some people seem quite sure that the victim made up his story in order to get attention.

In a recent interview with Dazed magazine, Shia LeBeouf said that during his #IAMSORRY event in February “one woman whipped [his] legs for ten minutes and then stripped [his] clothing and proceeded to rape [him].”

Soon after the Dazed article was released, Piers Morgan wrote an article for Mail Online where he said he was “enraged by [LeBeouf’s] claim to have been ‘raped’ because, frankly – he wasn’t.” Morgan argues that there is no way the incident can be considered rape if LeBeouf chose to sit and endure it:

“So let’s be very clear here: Shia LaBeouf wants us to believe he just sat in silence, with a paper bag over his head, doing absolutely nothing to resist as he was supposedly brutally whipped and ‘raped’? ….

Shia LaBeouf is one of the toughest actors in Hollywood… If he’d wanted to stop this complete stranger supposedly ‘raping’ him, all he had to do was physically stop her himself or shout for help.”

For a lot of people, Morgan’s reaction to LeBeouf’s alleged rape makes sense. Culturally, we have a hard time believing sexual assault can actually happen to a man, especially assault by a woman. Men are strong. Women are weak. Men aren’t victims. Instead, they are the ones who go out and avenge their women when they are raped, or murdered, or victimized in any myriad of ways.

While there are certain physical truths to this mentality (generally speaking the typical man is physically stronger than the typical woman), it also feeds into the unhealthy gender binary that has dominated our culture for so very long. It’s even an issue LeBeouf mentions in his interview:

“I always had a f**ked-up view on masculinity. My father was a gun nut like Hemingway. He was also a junkie and a bully, mainly to prove he wasn’t effeminate, even though he was a painter and a poet, a mime and a storyteller.”

While feminism has been challenging this gender binary for many years on behalf of women, recently, feminist organizations like The Representation Project have been drawing attention to how it hurts both women and men.

The Representation Project focuses on the problem with framing
manhood as synonymous with strength. In this context, any sign of vulnerability makes you “less of a man”.

This is why we laugh off the idea of male rape. Or we pretend only men can be predators, which is probably why female teachers are much less likely than male teachers to receive jail time for seducing a student. Or why cases involving a female authority figure are treated like a joke, as though the student involved was lucky to be selected. 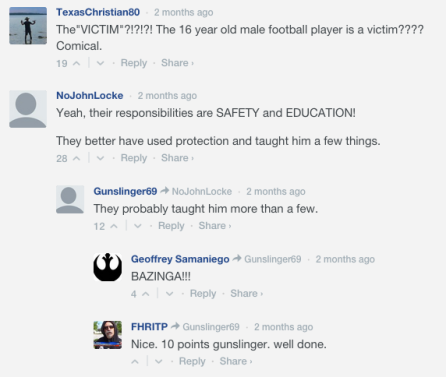 This is also why male rape is such an effective psychological tool for gangsters to enforce repayment of a debt. According to Vice‘s “Scariest Debt Collectors”, there is nothing more threatening to a man’s masculinity than sexual victimization (this is discussed about 12 minutes into the documentary).

It also might be why we find it so hard to believe that LeBeouf really was assaulted.

Personally, I don’t really care what prevented LeBeouf from putting a stop to the assault. Maybe he was just too shocked to act. Maybe he was dedicated to staying in character and thought he could “handle it”.

I do care about how we react to it. Are we going to be thankful that LeBeouf’s interview has helped to open up a dialogue for male victims? Or are we going to make the kind of comments that tell male survivors it would be better to “suck it up” and keep it to themselves, like a “real man”?