2 Broke Girls, S4E1 “And the Reality Problem”: A TV Review 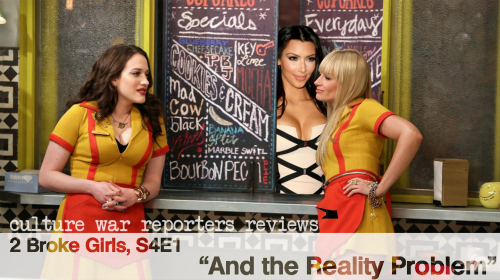 Believe it or not, I drafted this post over a month ago because I just assumed 2 Broke Girls was going to air alongside all of the other fall sitcoms. That was also when I put together the banner above, which I ended up using because CBS decided not to release any promo images. And heck, I was going to embed it somewhere anyway because I put way too long photoshopping Kim Noel Kardashian into that screenshot.

Here’s about the extent of what I know about the “American television and social media personality, socialite, fashion designer, businesswoman, model, and actress” [thanks for giving me her exact occupation, Wikipedia!]:

Here’s about what she did [Oh, hey! Welcome back, loyal readers! I’m using this awkwardly long pause in the middle of a sentence to say that I appreciate you and am glad you are here and we will face this new season together, you bet we will!] in the episode:

Truly this was a far cry from Lindsay Lohan’s appearance on the show, and I can only imagine that for any really die-hard fans of Keeping Up With The Kardashians [henceforth referred to as KUWTK] who were waiting to see more of their favourite American television and social media personality, socialite, fashion designer, businesswoman, model, and actress this was, well . . .

In a big way this entire season premiere lies in the shadow of its guest star [that joke is low-hanging fruit and I will not go there], with her appearance being heavily advertised by CBS. From beginning to end we’re waiting for her to show up, and to get less than a minute of her on screen [which could not have taken longer than an hour to film] left me, anyway, feeling kind of cheated. The episode as a whole was decent enough, though.

The focus comes back to their business as the cold open has Max explaining to a would-be robber that they work all day and then some, only clocking in at about three hours of sleep a night. They can not and will not afford to empty out their register, and man wouldn’t it be great if an American television and social media personality, socialite, fashion designer, businesswoman, model, and actress with 24.8 million twitter followers showed them a little love [side note: Caroline kept saying 22 mil, but maybe 2.8 mil manifested between the taping of this episode and now]. To sum up the rest of that plot, which is really the only plot of the episode, an agent of some sort offers to film KUWTK at Max’s Homemade Cupcakes, then it doesn’t happen, Max and Caroline get sad, Kim shows up later to apologize and even tweets about them. The end.

Okay, so maybe when I said it was “decent enough” I was referring to anything but the narrative. For one thing, Caroline follows in the tradition of blonde actresses in CBS sitcoms cutting their hair shorter for the new season and looks great. Seriously, Kaley Cuoco-Sweeting’s new do has nothing, and let me repeat, nothing, on Beth Behrs’ makeover. In addition to that wonderful change Han said a bunch of really gay stuff [and I don’t mean that pejoratively] and for their first punchline, because of course they had it recur, the writers opted for silence. That’s not the kind of restraint that would’ve taken place in past seasons, and I’m choosing to view it as a sign of better things to come.

What I would really love them to start doing though, and I know I’ve mentioned this before [I’m just too lazy to find the appropriate reviews to link back to], is stop living in the past. Referring to a cupcake serial killer as “one fat Dexter” makes reference to a show that ended [poorly] last year, and honestly just makes me think of this instead:

This reference dates me, I realize, but someone has to! Hey-o!

Not only that, but when the guy tries to rob them it’s described as a “hipster hold-up” the first word being a term I haven’t heard in months. While a few Tinder gags felt like they missed the train, name-dropping Orlando Bloom and Justin Bieber was more like sleeping in and hitting the snooze button for the eleventh time. If the show wants to stay “current”, and saying that makes me feel like an old person, the writers need to let go of a lot of the topical humour, especially when it’s so far past its expiration date.

Anyway, that’s enough criticism for one day. I have sort of missed you, 2 Broke Girls. Here’s to 23 more episodes of Season 4.

Sorry, everyone, I went a little crazy with the Stray Observations this time around.

New Total: $1,950. So Kim gives them $100 for the cupcake she eats, and apparently that’s all they make in two days? To be fair Caroline says that she spent all their savings on her hair, so I’m willing to handwave this all away. This time.

The Title Refers To: Kim Kardashian may be an American television and social media personality, socialite, fashion designer, businesswoman, model, and actress, but she’s most well known for KUWTK which is a reality show. That’s it. That’s the joke.

One response to “2 Broke Girls, S4E1 “And the Reality Problem”: A TV Review”