What Happened to Josh/Epic Mook on Epic Meal Time? 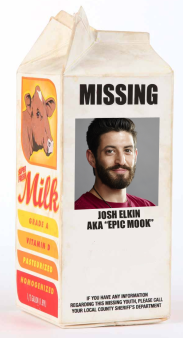 Today I watched the first episode of my favourite online cooking show equipped with the answer to the question that titles this post: “What happened to Josh/Epic Mook on Epic Meal Time?” It was a sombre occasion, and the burden lay heavy on my heart as I was witness to the EMT crew create a pizza enchilada, a “chicken from a drawer” enchilada, and a Baconator enchilada, all without the help of their most handsome member. Yeah, I said it, and before this blog post is done I’ll say it again.

Last I covered one of the Epic Meal Time guys leaving I was almost an entire year late, but I’m much more up to speed this time around. This time around I can actually refer refer back to a tweet that Harley “the Sauce Boss” Morenstein himself made just five short days ago:

I lost a teammate today. We will cherish the memories. Josh has moved on from EpicMealTime but will always be Epic pic.twitter.com/4N2rp3joJr

So the short answer is: he left the show.

The long answer is only slightly more complicated.

See, Epic Mook himself posted the following tweet on the same day, expressing his gratitude for having been a part of something [often quite literally] bigger than himself:

Thanks for life long memories & a constant flow of bacon grease passing through my veins. #EpicMealTimeForever pic.twitter.com/Y1dPKAi3Wh

Then, three days after that:

I'm hosting my own TV series called #SugarShowdown airing Oct.1 9pmET on @CookingChannel. CHECK IT OUT!!!

Sugar Showdown is, according to pretty much the only article I could find about it at the time of this writing, a TV show that “pits three bakers against each other for the chance to win $10,000 and the title of best dessert chef around.” It will be airing on the Cooking Channel, which I initially assumed was a poor man’s Food Network but is in fact a spinoff of the channel. Elkin will be hosting all 13 episodes of the program’s first season.

While on the surface the answer to what happened to Josh on Epic Meal Time is straightforward, given his new gig, but there’s also the question of whether or not they parted ways agreeably. The only reason I bring that up is MusclesGlasses/Alex Perrault’s reasons for leaving being that he “wasn’t being treated fairly considering the value [he] brought to the show.” Just in case the above tweets back and forth weren’t enough evidence that all is good under the range hood [kitchen puns, I’m sorry] here’s one last tweet from Elkin:

But what does his absence mean for the show itself?

Cast shakeups are always weird, with the sixth season of Community that aired on Yahoo Screen only starring four members of the original seven-person study group. At this point Epic Meal Time is left with Morenstein, David “Cousin Dave” Heuff, and Ameer “Prince Atari” Atari. Alongside Elkin the four of them were the stars of Epic Meal Empire, which ran on FYI for two seasons.

From left to right: Atari, Morenstein, Heuff, and Elkin.

While it turned out that MusclesGlasses [and the more-dearly-missed, personally] Tyler Lemco appeared to be replaceable, the face of their brand has for quite some time been the four men pictured above. Losing a full quarter of that hurts, especially when it is without argument the best-looking quarter.

In all seriousness, Josh helped them hit a demographic that the rest were not given their generally schlubby selves. Not only that, but he was the EMT member who most often hosted Handle It, an actual step-by-step cooking show that their YouTube channel airs on Saturdays. It’s not just that they lost a pretty face, they also lost the pair of hands most capable and comfortable in the kitchen.

Filling Elkin’s shoes are . . . well, they don’t have much going on that front right now. Videographer and awesomely-named Lemme Kno steps out from behind the camera from time to time, but his presence has never been met with the most enthusiasm. There’s also these two guys-

Screenshot from this week’s episode. They basically just show up and eat.

-but they’ve honestly done so little in the episodes they’ve showed up in, and I have so little interest in them, that I couldn’t be bothered to look up their names. They’re filler guys as far as I’m concerned, and unless they’re given some modicum of personality the two of them together can barely account for Elkin’s absence.

Epic Meal Time has existed for six years now, and doesn’t appear to be slowing down anytime soon. They’ve had a show that featured actual, real-life professional chefs [Epic Chef], counted themselves among YouTube’s most well-known and most-viewed stars, and even graced cable televisions everywhere with the aforementioned Epic Meal Empire. That being said, it feels like Josh leaving is a blow to the show, and probably the best for him personally. Again, it doesn’t look like EMT is necessarily on its way out, but maybe it’s best to jump ship while it’s still afloat-

7 responses to “What Happened to Josh/Epic Mook on Epic Meal Time?”