The reaction of both politicians and the public has likewise been swift and conclusive, with even German Chancellor Angela Merkel publicly declaring that “We know that responsibility for this crime against humanity is German and very much our own.”

The internet has likewise since been flooded with memes mocking Netenyahu’s idiotic claim, with such hilarious highlights as:

The mufti being the chief agent in breaking up The Beatles… 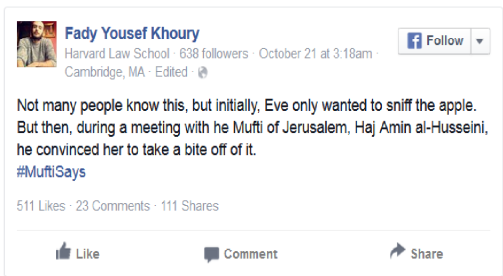 …and managing to cause the Shoah without having even existed…

A reference to an almost-equally vile quote by Israeli PM Golda Mier, who claimed that Palestinians “did not exist.”

And of course- my personal favorite:

All humor aside though, there is a much darker and more sinister element at play here.

As utterly false and moronic as Netenyahu’s claims are, we do need to be looking at why bloodthirsty-Bibi made them. Netenyahu is a psychotic, jack-booted nationalist, but he’s not an idiot, and I don’t believe for a second that either he or any of his goose-stepping goons believe the statements he’s made. But then why even state them? And why now, when Israelis and Palestinians stand on the cusp of a bloody and vicious struggle that will end in countless loss of lives.

Unless that’s the entire point.

And for anyone who thinks that I’m being too harsh here, let’s remember- once again- that Netenyahu, the leader of his country, has in front of the world declared that (1) Hitler did not want to exterminate Jews and (2) the holocaust only happened because of a Palestinian nationalist. Netenyahu is, in short, so wholely consumed by his hatred of Palestinians that he’s put them above Hitler and the Nazis as the cause of the greatest slaughter of Jewish people in history.

Make no mistake- that is the argument being made here: Palestinians, not Nazis, are responsible for the holocaust. Palestinians are, in fact, worse than Nazis- the very baseline for evil in our world.

And how do we view Nazis?

Nazis are less than human to us. They flood video games as the default enemy and we gleefully gun ’em down without guilt (Nazi-Zombies all the more so). We watch TV and movies contentedly as SS Soldiers get blown to smithereens or sniped or impaled or crushed beneath tanks.

Be honest- did you flinch for even a second watching this gif?

But according to Netyenahu, the disdain you feel for Nazis should be second- second in your heart to the contempt you feel for Palestinians. 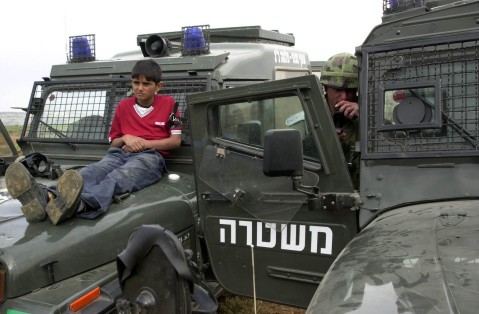 It’s apparently OK to take a Palestinian kid, tie him to the hood of your truck, and use ‘im as a human shield.

Now I’m not going to let Palestinians off the hook here. Anyone following this blog for even a little while will know that I have no problem with protest or even violence, however random stabbings- no matter how oppressed the perpetrators- is not what I’d call justice. But where I and many others (on both sides of the line) would see senseless violence, ol’ Bibi-the-Butcher sees opportunity. Opportunity to apply his signature move of collective punishment, bulldozing the ancestral houses of folks simply related to the attackers. Banning Arab school workers from Israeli cities simply on the basis of their race. Installing Orwellian surveillance at Muslim religious sites.

And it is for this reason, denizens of the internet, that I call upon you to continue churning out memes! Do not rest until Netenyahu’s race-baiting claims are drowned out in an ocean of jokes mocking ’em! Don’t let anyone- for an instant- buy the evil, warmongering lies Netenyahu is peddling!

Seriously, my photoshop skills are crap and there’s still so much material here.