What Wouldn’t Jesus Do?

“Would Jesus have carried a gun?”

That was the question Christian activist Shane Claiborne posed in an article this Saturday.

“The Jesus I worship did not carry a gun. He carried a cross.  Jesus did not tell us to kill our enemies. He told us to love them.”

These words come as a response to the shocking and repulsive comments by Liberty University’s president Jerry Falwell Jr. who, in a speech to his institution’s students, sneering declared that “if more good people had concealed-carry permits […] we could end those Muslims before they walked in and killed them.”

I shouldn’t have to explain how despicable those words are. And readers- I’m not going to.

If you’re reading this blog, I’m going to assume (to hope) that you have an iota of humanity in you. A speck of morality. A single shred of basic decency. I don’t think I need to describe what vile, bigoted, demonic filth that statement is. I don’t think I could even begin to. The heinous, cancerous insanity that Falwell spouts doesn’t merit a response.

Shane Claiborne, on the other hand, does.

It’s hard to argue with that.

In spite of the virulent portrait many Western Christians would paint of Jesus- that of a white, misogynistic social-darwinist who will reign hellfire on all the meanies who hurts Evangelicals’ feelings– the Prince of Peace (as we call him this time- and only this time- of year) wasn’t exactly a warlord. There’s verse after verse in which he calls for the forgiveness of one’s attacker, love of one’s enemies, and turning the other cheek.

Hardly the kind of person who you’d expect to be packing heat. 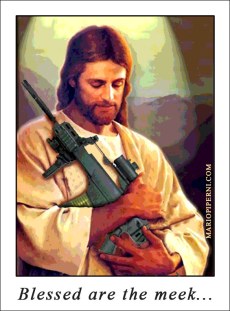 But then again, there’s the famed story of Jesus driving the money lenders out of the temple- and not, as many incorrectly believe- after having been surprised by them being there.

“Jesus made a whip from some ropes and chased them all out of the Temple. He drove out the sheep and cattle, scattered the money changers’ coins over the floor, and turned over their tables.”(John 2:15, NLT version).

That, for anyone keeping track, is an act of premeditated violence with a deadly weapon (scourges can take the skin clean off the bone, and in those days an infection could be fatal).

Not that the story’s undisputed, of course. While it sounds pretty cut-and-dry to yours truly, I’ve talked with folks who’ve argued that the original Greek puts a much softer emphasis on the words used. While I remain skeptical, it’s certainly not as if the rabid image we see here fits perfectly with the near-pacifist version we get elsewhere.

And that’s the core problem here:

What would Jesus do? 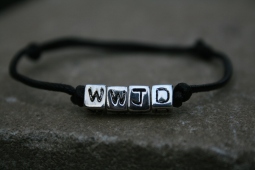 That simple question is supposed to offer believers and non-believers alike a calm and quiet reminder to re-examine their challenges and dilemmas.

Should I flip off the guy who just cut me off in the traffic?
What would Jesus do?

Should I half-ass this project I’m working on?
What would Jesus do?

Should I have used the word “half-ass” when many would consider the phrase offensive?
What would Jesus do?

Some of you might suspect where I’m going with this…

It’s a nice sentiment, and certainly not one without value, but I do gotta ask- how well does it hold up?

Hear me out here before you drag me off to the stake.

Would Jesus have advocated for a specific tax system?

The gut reaction most of us might have would be to shout “Of course not!”- but what about the poor?

There are plenty of verses declaring the responsibility of us to look after the least of our brothers- wouldn’t that include a change to the fundamental way we’ve established our society?

Would Jesus have participated in a protest that blocked a major road and disrupted the commute of folks just trying to get to work? Would Jesus have participated in the boycott of Apartheid South Africa? Would Jesus- given today’s options- been a vegetarian instead of a fisher? If Jesus had been born to the American frontier instead of ancient Palestine, would he have hunted with a musket?

I really and truly don’t.

What I do know is that Jesus never spoke about gay marriage. He never commented on the issue of torture. He never advocated against slavery or the death penalty. 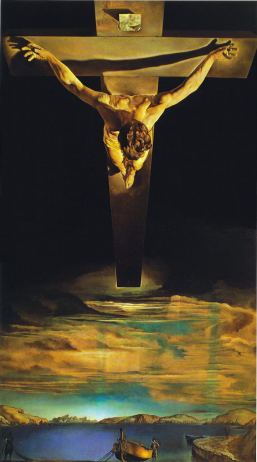 The latter, perhaps, for obvious reasons.

But there’s no question that these things are wrong. That they’re affronts to God. That they have no place in any moral and righteous. That they need to be wiped out.

I don’t want anyone to get the wrong idea here and think that I’m bagging on Claiborne. I might disagree with his pacifism and belief that religious people should shy away from politics, but I’d like to think I side with him on the vast majority of his points. Claiborne asks some truly tough questions, and I don’t think it would be right not to respond in kind.

If Jesus never ran for political office (which granted, in ancient Palestine, wasn’t exactly an option) does that mean anyone who believes in him shouldn’t run either? While Claiborne (and countless others) would portray Jesus as unequivocally nonviolent, first among the converts were Roman soldiers. Contrary to Claiborne’s claims that “There is not a single Christian in the first 300 hundred years of the faith who justifies violence or makes a case for self-defense”, there’s example after example of early Christians serving in the Roman military.

I’m not saying that you have to retire those WWJD bracelets, but we do at least have to start to re-think them. What is commendable? What’s damnable? What should we value as a society or struggle against as individuals?

If Jesus would in fact have carried a gun, my money would be on the AK.

2 responses to “What Wouldn’t Jesus Do?”