Trump Temptation: The Billionaire & The Bellboy: A Book Review 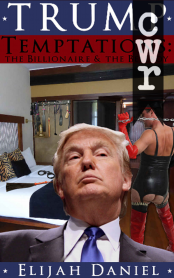 In spite of my nationality there’s very little I’ve been able to do to avoid news about the presidential nominees in our neighbour to the south. While Donald Trump hasn’t yet risen to the absurd heights of celebrity that Obama did shortly after his inauguration, it’s more than fair to say that he’s been creating an indelible mark on pop culture for far longer, for better or for worse.

Given his general notoriety, especially of late, it’s not particularly surprising that comedian Elijah Daniel was compelled to pen what I’m going to generously dub a novella about the businessman. While he was originally inspired by a Huffington Post article surmising that Trump had paid off a secret gay lover [unavailable at the time of this writing], the truth is that there are sex scandals announced all of the time. No, there’s something particularly special about Donald John Trump. Something special enough to skyrocket Daniel’s ten page tale to the top of a handful of Amazon charts.

Now I don’t want to go too deeply into exactly how Trump Temptation was written, especially when you can see for yourself by checking out the author’s very own explanation on Twitter. Feel free to check that out before coming back to this review, because I’m about to dive headfirst into some LGBT erotica.

Before the book has even really started the first page contains an admonishment to all readers, echoing those famous gates of Dante’s Inferno:

“What the fuck are you doing? Seriously. Why are you reading this shit? I wrote this really fucking drunk and in 4hrs. This is really bad, and it’s meant to be really bad.”

Our protagonist is the titular Bellboy, a young man from a small farm town in Michigan, and from the beginning his is a tale of unbridled lust. It doesn’t take more than the slightest whiff of the owner of the hotel he works in to get his engine running, and it’s running hot on all cylinders. Within the span of a few pages he has his hopes raised, dashed, and then rocketed sky high. The Republican presidential hopeful’s seduction is hardly needed, but when Trump does act it’s in addition to his own sheer animal magnetism, exuding brash confidence by both telling as well as showing.

Of particular note is that while his descriptions of his soon-to-be lover’s physique are never particularly flattering, at least to us as a general audience, reading about him pining for Trump’s “geriatric 2006 Perez Hilton jello body” never once feels feels homophobic. The Billionaire and The Bellboy doesn’t revel in any apparent “ickiness” surrounding homosexual activity, focusing more on the general desirability, regardless of orientation, of one man in particular.

Once our unnamed narrator has begun the interminable wait to what’s sure to be a truly unforgettable night we’re caught right alongside him. Daniel’s pacing is such that readers know every page turn is bringing them that much closer to the end, their impatience mirroring the protagonist’s. As he makes his way back to the Hong Kong Trump Hotel I was practically begging him to hurry up and return to the mogul’s suite.

One of the categories that Daniel’s book reached #1 on Amazon in was Gay Erotica, and the finale seeks to really stress the confines of that genre. While you may find it elsewhere online, this reviewer isn’t one to reveal how the billionaire and the bellboy’s tryst ultimately turns out. What I can say, however, is that it made the entire experience completely worth it.

Trump Temptation: The Billionaire and The Bellboy is by no means a perfect piece of literature. In spite of seeming assistance from editor Nick Sanchez there are still numerous places where Daniel trips up grammatically, certainly enough to become noticeable as time goes on. That being said, the work as a whole is ultimately buoyed up by his deftness with descriptive language, a personal favourite being: “my lustful thoughts had awoken the purple-headed yogurt slinger in my pants.” Combine that with a finale that will truly blindside even the wariest among us and you end up with what is, ultimately, a perfectly entertaining work of fiction.

Reportedly the first in a trilogy, The Billionaire and The Bellboy ticks all the boxes of a contemporary smash hit. It’s short enough to appeal to that infamous millennial attention span, it stars a larger than life celebrity figure, and, most importantly, it’s incredibly funny. It’s exactly what you would expect from a comedian with over 105K followers on Twitter. Well, almost as much as you could expect. Again, that ending is really going to get you-