“You Might as Well Have [insert character here] Be [insert 2-4 minority types here]!”

One of the most common adages on the internet is “don’t read the comments”. While this global network that we’re all currently using [unless you somehow managed to snag a printout of this post] has given us all the ability to share and discuss everything under the sun, the unfortunate truth is that a lot of that conversation amounts to hot garbage. You could scroll down past an article to see what people are saying about it, but chances are that it won’t be a particularly uplifting experience.

As someone who spends much of his time online reading about entertainment there’s a type of comment that I’ve seen crop up time and time again. It’s existence ties directly into a lot of the recent trends in comic books, television, and film, the push towards inclusivity and the people who are actively working to make that happen. A perfect example [of a handful I’ll be referencing throughout this article] is:

“disabled, multiracial trans women with disfiguring facial scars” – posted on “There are more (white) women starring in movies than ever before”

I’ve been compiling these for the past few months, originally with the intent of putting together another “For Your Consideration” and allowing readers to look them over and come to their own conclusions. A general [and accurate] takeaway would be to note them as being typical of inane online comments and move on, but I’d like to spend a little time breaking down the idiocy they represent.

They Perpetuate the Default

The default person, in case you needed to be informed of who generally holds the most power and screentime across the board, is a straight able-bodied cisgendered White man. I’m painfully aware that simply listing those words in successive order like that marks me as being one of the SJWs [my thoughts on that term here], but every one is important to take note of.

“black Asian gay lesbian transgender Spider-man” – posted on “Dear HOLLYWOOD REPORTER: May We Have a Word About ‘Cultural Appropriation’?”

To look at the list and mark it against the checklist of what makes a default human being, in the eyes of at least a few, we have:

Other comments I’ll be including later on will add examples that include disabled people, but the general gist of every one capitalizes on the absurdity of a person who doesn’t match the standard cutout. A  straight able-bodied cisgendered White woman? Not a terrible strain of the imagination. Once you start to tick off more items that don’t coincide with the norm, however, things apparently get a lot shakier.

I don’t even think that many of these commenters are aware of the implicit message behind the words they type. By listing these adjectives and identifiers they end up with a person who most of them share absolutely nothing in common with, which exposes the very reason we need diversity at all. Everyone should be able to relate to entertainment, and for too long the industry has catered to an audience that gets smaller every day.

They Assume These People Don’t Exist

This is most telling when references are made to characters potentially being of First Nations descent [specifically Inuit, in all of the ones I found]:

People wondering if indigenous people even still exist in North America is nothing new, which the title of a 2012 documentary addresses and debunks, and choosing them as the non-White modifier in these cases takes advantage of that. How could someone be First Nations or Native American in addition to everything else when we’re unsure if they’re around anymore?

The sheer number of comments that refer to transgender people probably takes no small inspiration from the very current conversation going on about which bathrooms transgender people are “allowed” to use, and a very large unspoken part of that conversation is if there are enough of them for it to be a factor to begin with. It’s not so much that there needs to be a veering away from the default, but ideally the examples should be so marginalized as to have the possibility of them being real reduced to zero. 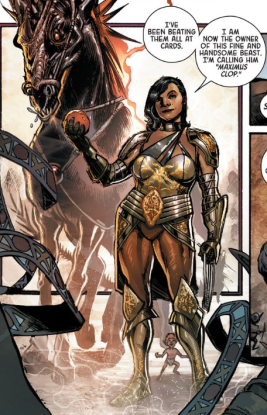 A co-star in a series of Marvel titles starring Angela, Thor’s half-sister [long story], Sera is a lesbian transgender woman of colour who is portrayed, at least in earlier issues, as leaning on the larger side.

When reading the the 17 issues she appeared in I never thought about how “realistic” she was, especially not in a comic that had her and Angela face off against everything from space pirates to dark elves. Instead what I was most concerned with was whether or not Sera was a good character, whether she had her own motivations and clearly defined voice [spoiler: she does]. Ultimately race and orientation and whatever else has no bearing on a character being successful. The vast majority of entertainment is based in fiction, it’s not what, but who, a person is that really matters.

They Assume the Worst [and the Truly Nonsensical]

Given the lengths to which these commenters have gone to throw together what they see as the greatest improbabilities, it probably goes without saying that the scenarios they’re presenting are extreme, to put it lightly. Beyond that, however, is that these “suggestions” they’re coming up with wouldn’t be embraced by even the most rabid SJW [again, I’d refer you to the article I linked to up above].

“blind one legged, eskimo ,transgender” – posted on “Marvel Could Be Adding an Asian Martial Arts Hero to Iron Fist“

The first comment is about Iron Fist, a White superhero whose superpower is mystical Asian martial arts, who many had been saying should be cast as an Asian American in his upcoming Netflix series. As a character whose crimefighting abilities are tied into his physicality the idea of him being a “paraplegic dwarf” makes no sense at all. On a similar level Misty Knight is a Black woman and former NYPD officer, an occupation which would be more than challenging if she were “blind [and] one legged”.

Misty Knight by A. C. Zamudio

As a quick “Um, actually” I feel the need to point out that Misty Knight is already physically disabled due to her missing her right arm. It’s been replaced by a robotic prosthesis, but as it stands she’s is a Black disabled woman, a combination which may have found its way into one of these comments in a slightly different universe.

There are a countless multitude of internet threads that bear the question “then why can’t Black Panther be White?” [you may have seen one, and if not, you will], and the answer is a simple one: because it doesn’t make any sense.

Contrast that to something like an alternative take where Spider-Man is Peter Park instead of Peter Parker. Would portraying the webslinger as a Korean
actually change the ability to tell the kinds of stories so many of us are familiar with? What would so many tweaks to race or orientation actually do to affect who a character is at their core?

These comments make the false equivalency that having Tessa Thompson, a Black woman, playing the Asgardian Valkyrie is the same thing as an epileptic Jubilee [her mutant power was creating “Lumikinetic Explosive Light Blasts”, which are just as bright and flashy as you might think]. It still has to make sense, but to some even the slightest deviation throws believability completely out the window.

They Don’t Offer Any Solutions

As the last section states, there aren’t any concessions to be made for a very vocal sample of fans. The thing is that there also aren’t any alternatives being presented either.

“Why not make Superman and Batman the next lgbt couple and Wonder Woman an african American T transitioner?” – posted on “As DC’s REBIRTH Looms, Veteran Editor DAVID WOHL Joins To Assist In Transition”

The question is not whether to have Superman and Batman in a gay relationship with one another, it’s how to see more gay relationships in the entertainment we consume. It’s not if Wonder Woman should be a Black transgendered woman but if there’s a space for them outside of Orange is the New Black [the answer, thankfully, happens to be yes].

Without compromises, solutions, or alternatives these comments simply underscore the fact that the people writing them are deeply unhappy about recent changes, and that they foresee more of the same. By not allowing for the possibility that there might be increased diversity without damaging the stories being told they express how much that truly means to them at all.

To return to one of my initial points, in many ways the internet is a hole. It’s a space where the anonymous can run their mouths without fear of repercussion, and as such it may seem like a foolhardy exercise to even bother tearing down the arguments found online.

That being said, these same sentiments can be found in less vile, concentrated forms in everyday life. They’re harmless observations that reveal a disregard for actual change, but that can thankfully be addressed in a very simple way. What are the alternatives? What realistic steps can be taken to increase representation? Do you even think we should be doing anything about this at all? Do you care?

One response to ““You Might as Well Have [insert character here] Be [insert 2-4 minority types here]!””