Will You Really Be Afraid This Halloween?

‘Tis the season to be afraid.

That’s the whole point of the tail end of October, isn’t it?

Just last night I went to Canada’s Wonderland to experience their Halloween Haunt event for the first time ever. As one might assume from its name, the amusement park sets up a number of “Haunted Attractions” which feature such individuals as-

-who stand just out of sight waiting to step out of the shadows and shriek inches from behind your head. Their co-workers also stalk the areas outside, lunging at unsuspecting attendees just trying to get to the next thing before the park closes at midnight. Also included in the event are the rides, which likewise draw crowds looking to be terrified, though in this case by great heights and breathtaking falls [I’m looking at you, Drop Zone {I know it was renamed, but you don’t see me calling the Skydome the Rogers Centre}].

What I’m sure reads very much like an ad for Halloween Haunt 2016 at Canada’s Wonderland aside, that entire evening had me thinking long and hard about fear. 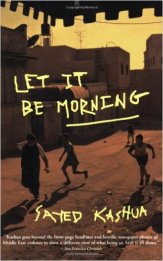 At the beginning of this week I finished Let It Be Morning, by Sayed Kashua, which is probably one of the scariest novels I’ve ever read. It follows the life of an Israeli Palestinian man experiencing the Second Intifada first-hand, a period I am continuing to learn more about. At the time I only had the vaguest understanding of what it entailed, and seeing it occur through the eyes of this character put me on edge and then kept me there.

It was the assertions of his friends and family members that everything would be alright, that bad things would cease after a time, the niggling doubt that they might be wrong slowly coalescing into actual dread. It was fear for one’s life and way of living punctuated by a complete loss of hope. It was not exactly a feeling that could be replicated by even the best “Haunted Attraction”.

Continuing this week were the protests surrounding the Dakota Access Pipeline, some circumstances of which eerily mirror the events that took place in the Middle East. While WIRED was unable to verify the claim, Chief Looking Horse of the Lakota, Nakota, and Dakota Nations stated that:

“We used to have our cell phones, but as soon as we took a stand there, they just shut us out. You can’t even make calls from the cell phone from that camp. You have to go probably about 20 miles south to get service.”

Now this isn’t to draw any explicit comparisons between the conflict that occurred and continues to occur between Israel and Palestine and the one between many Native Americans and law enforcement in North Dakota. Instead what I mean to underscore is the fear of being cut off from the outside world, made all the worse by the fact that in their protest they are facing “mace, rubber bullets, water blasts and sound bombs.”

Couple that with the news that one presidential hopeful has close financial ties to the pipeline company and the other released a statement saying “literally nothing” the sense of dread that things will not get better can only grow. On a very similar note we have the impending US presidential elections running largely on the fear that one candidate will bring about the end of the country should the come to power.

The book I’m currently reading, A Long Way Gone: Memoirs of a Boy Soldier, sets the scene with a country being overrun by violent rebels. A child narrowly avoids countless horrors before ultimately being forced to take part in them.

Now I don’t mean to delve deep into what it means to truly be afraid, whether its truest form is crushing dread or a desperate panicky scrabbling away from the inevitable. Instead I thought it would be interesting if we viewed Halloween, if only for a moment, like Thanksgiving [having passed for Canadians and still to come for Americans].

In the same way that at Thanksgiving we count our blessings and muse over what we should be thankful for we might also take a moment near or on Halloween itself to consider the sources of our fear. Not stress or worry or concern but actual, genuine fear. With that in mind when was the last time most of us have ever been afraid? Not as attendees to some sort of spooky amusement park thing but as a part of our daily lives.

When viewing what’s happening in the world at this very moment is fear really the emotion that we’re feeling? Are we personally terrified by these events and for the people involved in them. And if we can genuinely say that we are, how much more must it be fore those who are actually on the frontlines?