This is Carly Fleischmann: 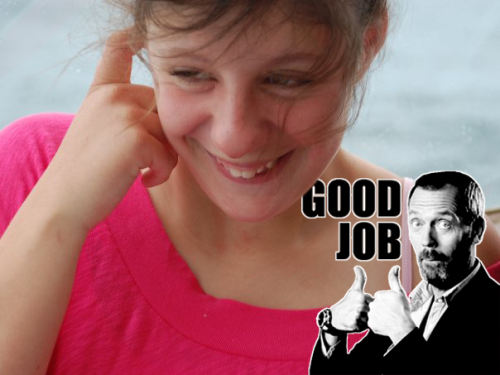 According to an article written by her father, Arthur Fleischmann, Carly was diagnosed with autism, developmental delay, and oral-motor apraxia (“a neurological condition preventing speech”) by the time she was two-years-old. Carly underwent years of therapy, which eventually allowed her to walk, stand, and feed herself. Unfortunately, Carly showed no hope of ever being able to communicate. In fact, her behaviour made it seem as though Carly would have nothing to communicate even if she could express herself:

“Carly went to therapy sessions, bleated, screamed and never ever stopped moving. Her actions were feral and, if not tightly monitored, destructive. Left unattended, she emptied containers of baby powder, smeared peanut butter on the furniture and overflowed bathtubs. One evening she slipped out of the house at dusk and crossed four city blocks before we found her stripped naked at her favourite park.”

Then, one day, something changed. Carly spoke. Just not in the way you might expect. The video below reveals how Carly turned to typing in order to express the feelings she could not communicate verbally.

END_OF_DOCUMENT_TOKEN_TO_BE_REPLACED

Last time I was in prison I remember thinking to myself, “This sure reminds me of high school.” This was mostly because of the way the prison was structured like a school: there were various buildings connected by paths and even nice little areas with a tree or two and a bench to sit on.

The visiting areas were set up a lot like a school cafeteria, but apparently all the tables had microphones in them to monitor conversation. I also had to go through some sort of metal detector to reach the visiting area and had to leave my keys at the front. For the most part it was easy to forget where you were, as long as you couldn’t see the razor-wire fence from where you were sitting.

I was the one visiting, in case you were starting to wonder where that introduction was going. END_OF_DOCUMENT_TOKEN_TO_BE_REPLACED

Lisbeth, the Sexualized Autist: What The Girl with the Dragon Tattoo says about American Culture

Let’s just be clear: I know that The Girl with the Dragon Tattoo is Swedish. My comment is on its popularity in American culture: its best-seller status in the NYT for 18 months, triggering a Hollywood remake of the original Swedish film. The heroine, Lisbeth, is whom I’m most interested in.

Lisbeth is the poster child of counter-culture: mowhawk, dyed hair, androgenous, facial piercings – what attracts people to her is that she manages to pull all of these things off (the reason being she is astoundingly beautiful) and references to her terrible experiences conveniently switch her label from “irresponsible” to “misunderstood”. Lisbeth, I think, represents two key memes in contemporary culture, the subtle prevalance of which interest me: the sexualized autist and the competent social outcast.

Let me be clear: I’m not talking about a classified DSM-IV disorder when I talk about Lisbeth’s autistic traits – I’m just talking about the word autist as it derives from the root autos (self), which refers to a lack of empathetic sensitivity. Classic autists in fiction include: Spock, Data, Sherlock Holmes, C3PO, Sheldon from The Big Bang Theory, Monk, and (often) children. Autists serve the purpose of deconstructing society: they often involve humorous responses to or dissections of modes of relating that come natural to most humans. Here is Sheldon’s deconstruction of the social idea of dating:

In TGWTDT, Lisbeth interacts autistically: one of the first things said about her report is that though it is thorough, it lacks her personal opinion. She, stonefacedly, refuses to acknowledge that she understands any reason why her opinion would be useful. Throughout the movie, Lisbeth is expertly and unthinkingly wholly dedicated to performing her obsessive tasks with excellence: autists almost always are (Monk, River Tam).

Lisbeth’s upbringing and fringe placement in society should, according to social evolution, render her unable to support herself. On the contrary, she achieves competency without the support of society, and spends much of her time defending herself from the flaws of the establishment (every scene with the social worker, his eventual blackmail). She joins Julia Roberts in Pretty Woman, the woman from The 5th Element, and Jane Eyre as the neglected gamines who nonetheless flourish and become experts at fending for themselves.

The essence of Lisbeth’s character is a common one that seems to be increasingly attractive to American audiences: the sexualized, independent autist. This is River Tam from Firefly, the woman from The 5th Element, and is echoed in Edward Cullen from Twilight, Dexter, and Dr. House. These characters reveal society’s increasing fetish of self-efficacy – they exude strength, independence, and provide an expression of rage at the more subtle social injustices and inhibitions of social norms. They do not respond to social patterns and expectations, like Sheldon Cooper or or C3PO, but unlike those humorous characters, the sexualized competent autist provides a violent and hypersexual (almost gnostically sexual – oftentimes, like with Julia Roberts in Pretty Woman and Lisbeth, the characters detach themselves from their sexuality and use it as a tool) successful escape. They offer a character who does not succumb to illogical non-verbal communication and oppressive social codes: they interact logically, not heatedly (Lisbeth asking Mikael for permission to kill a serial killer), and ultimately succeed, and achieve a sexualized, center-character status at that, as opposed to the comic relief status of the typical autist.

What does this say about American culture? I’d say that it indicates a reaction against the stress of social niceties. These movies could be called counter-culture, but a very thinly veiled counter-culture – no, sexualized autistic characters are not appearing in chick flicks with Owen Wilson, but The Girl with the Dragon Tattoo was by no means an obscure movie. The characters precede what I think is going to become a more prevalent theme in American culture: a fetish of successful social rejection.

Tagged America, autism, The Girl with the Dragon Tattoo