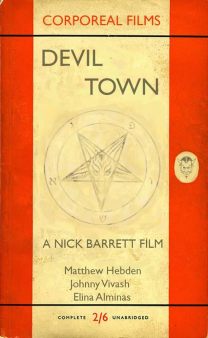 Last week, CWR was given a chance to review Devil Town, a short film in the spirit of classic 60s horror.While Devil Town’s protagonist may have been unwittingly cornered, the fiendish flick’s creator was more than happy to speak with us about his inspiration. Here’s our interview with director Nick Barrett.

Could you tell us a bit about what inspired the story behind Devil Town?

As with most film ideas it’s usually a collision of different thoughts and influences. In Devil Town’s case I was given an old fashioned whistle as a present and just had it lying around my room, I kept picking it up and thinking why someone would pull it out of their pocket. I’m also a huge fan of the old fifties Twilight Zone as well and always loved their ‘containment’ episodes, ones that were set entirely in say a train station waiting room, a roadside café or, infamously enough, a plane journey at  20,000 feet. These kinds of shows were known as ‘bottle’ episodes (episodes designed to save money by using limited props, actors and locations) but they’re some of my favourites as well – and the concept lends itself perfectly to low budget shorts. When done well the viewer won’t even be aware of the contained environment, or it just becomes so integral to the narrative that it isn’t an issue – you can see it working brilliantly in recent films like The Invitation or Green Room or a TV show like Inside No 9.

Harold Pinter was a big inspiration too – the concept of a stranger invading another’s space, the power struggle between two characters, conflicting class systems, you see all that in things like The Homecoming, The Servant, The Birthday Party and The Caretaker – and I’m sure the concept of a rather sinister tramp was subliminally lifted from the great man’s work. END_OF_DOCUMENT_TOKEN_TO_BE_REPLACED

We open on a late afternoon as a ragged street preacher prophesies impending death and doom to disinterested passers-by. Among their number is Patrick Creedle (Matthew Hebden of Cartwheels and The Basil Brush Show), a character as fantastically despicable as his phone conversations are loud and abusive.

Which, for the record, is very.

Creedle steps into a local cafe for a coffee, unaware that the street preacher has followed him inside. Cornering Creedle at his table, Rime of the Ancient Mariner-style, the street preacher demands a few minutes of his captive’s time to relay a tale of creeping horror.

Hebden’s performance is definitely the highlight of the film, appearing instantly despicable without being cartoonish. He’s very much the self-absorbed ***hole that we know to well, and in his more sympathetic moments, Creedle could very much be us if we were caught on a bad day.

Our street preacher (Johnny Vivash of The Creature Below and The Collaborators) does a decent job of portraying a schizotypal vagrant who might not be quite as crazy as he first sounds. His insistence that a dark conspiracy is afoot grows increasingly eerie with every desperate whisper. END_OF_DOCUMENT_TOKEN_TO_BE_REPLACED