More Ninja Turtles News [And Why Not To Be Mad]

Way back in April of last year I wrote a post called “Mashin’ It Up” [titled after something Harley Morenstein says on Epic Meal Time] that mentioned the new upcoming Teenage Mutant Ninja Turtles film. You don’t have to read it if you don’t you want to, and I can sum it up with the following sentence: the turtles will now be aliens.

Oh, and Michael Bay will be directing, but you knew that from the title.

Over at the aptly named michaelbay.com the following was announced just yesterday:

TMNT: we are bringing Megan Fox back into the family! 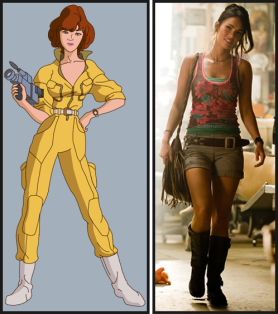 To be more specific, Megan Fox will be playing April O’Neil, the Turtles’ ladyfriend. Prompting rage from all corners of the internet [not that they weren’t already upset about the “alien” thing].

As you all probably know, Megan Fox played a pretty pivotal role in his first two Transformers movies, until the two had a falling out and she was replaced in the third film by a blonde goldfish [looks are subjective, but that’s just how I feel about Rosie Huntington-Whiteley]. Now it appears that the two have patched things up and the actress will have moved on from hanging out with alien shapeshifting robots to hanging out with ninja turtle aliens.

She managed to beat out starlets Jane Levy, Anna Kendrick, and Elizabeth Olsen, who were all also in the running. I can say for a fact that the latter two, at least, are very talented actresses and that I am very glad they didn’t make it. Allow me to explain myself.

No one out there expects this to be a good movie. I mean, sure, co-creator of the original TMNT comic Kevin Eastman thinks it’s going to be “a fantastic film,” but I’m not buying it. We’ve all seen Transformers, we know what to expect: a testosterone-fueled explosion-fest that will include at least one decent fight scene that you’ll have to find on YouTube after you’ve seen the movie because there was too much detail in too short an amount of time. It won’t be good.

And because it won’t be good I don’t want Anna Kendrick in it. If it’s going to be a train wreck of a movie I don’t want decent actors and actresses to be involved in it. Megan Fox can be April O’Neil because if I watch this film I want to enjoy it like I do a triple bacon cheeseburger, knowing it does nothing good for me whatsoever. Casting a truly gifted actress would be like putting spinach on that burger; it’s not where it should be, and in spite of being healthy would actually hinder my enjoyment of it as a whole.

So I’m not mad, personally. It’s just a Michael Bay movie, something we’ve all had to get used to at some point this past decade. You can be upset about it if you want to, but that’d be like being mad that an episode of Here Comes Honey Boo Boo doesn’t have better cinematography.