Was K’un-Lun Founded by Aliens? The Answer May Surprise You!

The following is research that was done for my post titled “The K’un-Lun of Netflix’s Iron Fist [Within the Larger Context]”, as a means of supporting one of my points. Due to its length I decided to dedicate another short post to it to avoid adding to what was already too lengthy an article.

I would encourage you to read that one in full, though this should certainly be interesting enough on its own.

For the vast majority of my blog posts about Marvel comic books I refer to the Marvel Database, an unofficial wiki updated by fans. While that format can and does lend itself to the occasional error, the citations at the bottom of the page referring to specific runs and issue numbers allow for fact-checking if needed. At this point in time there are no direct mentions to K’un-Lun being anything other than one of the Capital Cities of Heaven, besides a heading for the alien race the H’ylthri with no text underneath it.

However a number of other sources have slightly differing origins. Comic Vine, another well-regarded comic book wiki, mentions on its entry for the city that:

“K’un-Lun is the stronghold of a colony of humanoid aliens, place of origin unknown, whose spaceship crash-landed upon a small, extradimensional world, approximately a million years ago.”

Unfortunately there are no citations listed anywhere. This tidbit of information is also listed on Marvel Directory, a largely defunct site that appears to have been last updated in 2015. Their entry categorizes K’un-Lun as an “Alien world” and only refers to the issue where the location first appeared, Marvel Premiere #15. As far as anything from Marvel themselves, the page on the publisher’s own wiki currently does not exist. 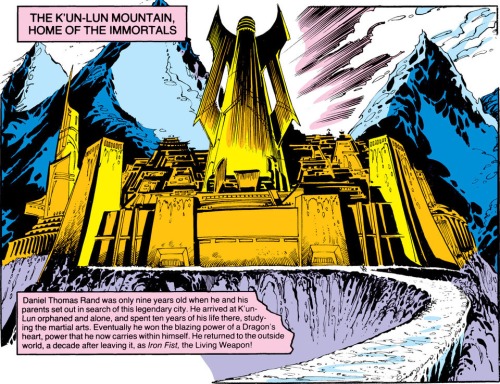 END_OF_DOCUMENT_TOKEN_TO_BE_REPLACED

Last weekend, I was lucky enough to steal a couple of my nieces and bring them home with me. For the last few days, they’ve been busy helping me out with the kids program I run at work, and in the evenings we’ve all been busy showing them around the bustling metropolis of Williams Lake. While I thought about skipping out on this week’s post altogether, I decided instead to write a quick post about the movie we watched last night.

Below, I’ve included 3 reasons why we think you should watch it.

1) The aliens are super cute

This was why my nieces loved this movie so much. The main group of aliens, called the Boov, change colour according to their mood and seem to be made up of a jelly-like consistency.

The main character, Oh, is considerably cuter than I thought he would be. When I first saw the commercial for Home, I assumed that Jim Parsons would play a cartoon version of his well-known character from the Big Bang Theory. It was a pleasant surprise to see him change things up a bit while playing an equally quirky character in Home. Oh, the alien played by Parsons seems considerably more fun to be around than Sheldon.

END_OF_DOCUMENT_TOKEN_TO_BE_REPLACED

Now when I covered webcomic Sinfest for a Shame Day, I directly addressed the comic’s creator, Tatsuya Ishida, in the off-chance that he might stumble across what I had written. While I don’t think (1) anyone from the History channel is going to come across this post or (2) give a flying **** about it if they did, talking straight to the source came pretty naturally, so I’m going to be employing the same technique again. END_OF_DOCUMENT_TOKEN_TO_BE_REPLACED

I don’t usually celebrate Halloween readers. Honestly, I don’t celebrate any holiday, if I can help it, May Day being the sole exception.

Nevertheless, we’re always trying to expand our horizons here at Culture War Reporters, and hope that you might be trying the same. To help us both get into the psychotically commercialized spirit of the season (baby steps, people, baby steps), here’s our recommendations for your scary viewing pleasure.

I’d honestly be surprised if you had heard of this one. 2002’s The Mothman Prophecies wasn’t a big enough hit or a bad enough flop to gain either fame or notoriety. Regardless of it’s mediocre performance at the box office, I think The Mothman Prophecies is probably one of the most underrated horror/thriller flicks out there. The story follows a journalist John Klein (played by Richard Gere), who in the wake of car accident in which his wife is injured and eventually dies, alternatively hunts and is haunted by a strange, otherworldly presence acting as a harbinger of doom. In a refreshing break from your run of the mill guts-and-gore flick, The Mothman Prophecies forgoes violence in favor of a tense, surreal atmosphere far more disturbing than anything that could actually be shown. If you’re a Twin Peaks or X-Files fan, you’ll probably get a kick out of this one. END_OF_DOCUMENT_TOKEN_TO_BE_REPLACED

As with many elements of modern culture, I walk the blurry line between fandom and general enjoyment. I like plenty of stuff, but I wouldn’t say I love anything. I enjoy comics- more than the average man on the street- but I’m definitely not on a level where I could seriously discuss comics with someone who’s actually into them (as Evan can attest). I enjoy heavy metal, but I couldn’t name the leading band of the past couple years or tell you the difference between Finnish black metal and Swedish death metal.

This is neither, just for the record…

Even though this gets me simultaneously branded as a nerd  by people who aren’t fans of _______ and a poser by people who are, I nevertheless get a pretty unique perspective on things. I can see how they work- what their appeal is- without getting objectivity compromised by being too emotionally invested.

Now I think I’d be hard pressed to think of a better example of this than Doctor Who.