Shame Day: Africa Will Always Be Poor (And Other Racist ****)

First off, CISPA, passed by Congress last Friday, is headed to the floor of the Senate. If you haven’t already, get in contact with your senators and send them this message:

Now back to business.

I’ve been meaning to take a crack at this issue for a while. In fact, I’ve even tried a few times to actually write a post on it- I just couldn’t quite find the words to illustrate the problem succinctly.

Then, earlier today, I came across this image [click to open up larger in a new window]:

For me, the image of where I grew up wasn’t one of famine, drought, poverty, and starvation. Rather, I constantly encountered- and continue to encounter- the idea that the Middle East always has been torn apart by war.

Firstly, that simply isn’t so. In the grand scheme of things, the sandy cradle of civilization hasn’t been all that much more violent than anywhere else in the world. In the past 200 years, the Middle East has actually been significantly more peaceful than Europe, wracked by religious and nationalist turmoil, or the Americas, whose native populations underwent systematic genocide.

Now I can understand that false image. I don’t accept it, mind you, but I do understand it. The only time the media really portrays another country or culture is when there’s some supposedly world-ending crisis or a royal wedding. There’s no money to be made in telling people that they’re probably going to be okay for now, but that’s a rant for another week. 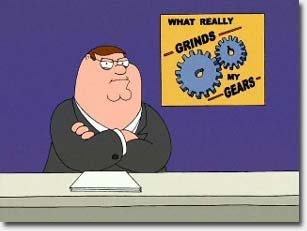 What get’s me- what really gets me- isn’t that people state the Middle East always has been violent, but rather that it always will be.

Now let’s break that down.

It’s been too long since I’ve used this one…

And you know what? I wish those people would just come out and say it like that. “Arabs are inherently violent people,” “Latinos are just too corrupt,” “Africans just have it in their nature to be poor.”

Don’t give us this “Oh what a wicked world we live in” BS. Don’t pretend to despair. You say “Africa will always be poor” and what you really mean is “Africans can’t be anything but poor.”

Now the opposite end of the spectrum is maintaining the view that all the issues in these places (and don’t get me wrong, there are plenty of issues) can be solved by some simple fix. I can’t tell you how many times I’ve heard people comment on the Israel-Palestine conflict “They should just stop fighting each other,” “You don’t eat pork, I don’t eat pork, let’s not eat pork together,” “I think both sides are wrong,” and “Can’t they see that we’re all people.”

Again, this is just showing how little the speaker actually thinks of these people. Whatever it is they’re fighting over can’t be so important that they can’t just “stop.” Imagine, for example, if someone looked at the conflicts over civil rights and segregation in the 1960s and said “I wish both sides could just compromise.”

You would be offended, and rightly so.

Whoever says something like that clearly has no concept of the conflict or its history or its implications. Instead of putting even the least bit of effort into trying to understand why their fellow man is dying by the scores, they opt rather to throw out some saccharine one-liner to make themselves sound saintly and noble.

Because as far as they’re concerned, those involved are not their fellow man. They’re some grunting bunch of primitives whose situation isn’t worth learning about and couldn’t possibly be important or noteworthy.

I can’t help but hear the words of Rudyard Kipling’s The White Man’s Burden in my head every time someone makes some sweeping statement about the doom or salvation of brown people.

Take up the White Man’s burden–
The savage wars of peace–
Fill full the mouth of Famine
And bid the sickness cease;
And when your goal is nearest
The end for others sought,
Watch sloth and heathen Folly
Bring all your hopes to nought.

The world really hasn’t changed so much since 1899 when Kipling spewed out that garbage. Views that the inhabitants of the rest of the world are nothing more than “Half-devil and half-child” are still rampant, we’re just better at hiding it. And what are the implications?

The lives and deaths of non-westerners are devalued. Evan discussed this partly in his post on Friday, pointing out that this isn’t an issue of us valuing death more when it’s “close to home”- it’s an issue of us simply not viewing all lives as having equal value. This is racism people, no matter which way you slice it.

Now that I’m done with that bitter vitriol, I’m going to go watch some Adventure Time. Here’s a gif to cheer you up.

2 responses to “Shame Day: Africa Will Always Be Poor (And Other Racist ****)”