Evan and Gordon Talk: Can Artists Retract Their Work?

EVAN: So today, due to lack of reader feedback, G-Town and I will be discussing a topic of his own choosing. That is, in his own words, “whether or not an artist can retract his [or her] own work.”

GORDON: It doesn’t happen often, though it’s not altogether uncommon, that we see some artist disparage his or her earlier work.

More often than not, it’s because that earlier work was pretty rough or sloppy- heck, maybe even commercialistic. But we’re not talking about that. We’re talking about what we see once in a blue moon- when an artist actually attacks or her own work as being wrong.

I HATE YOUR PAINTINGS!

Think of Botticelli burning his own works in the Bonfire of the Vanities back in Renaissance Florence.  Think of Sam Raimi regretting his infamous “tree scene” in the Evil Dead.

EVAN: Now that you mention Raimi, there is a really, really relevant example of this happening, reported as of today.

EVAN: In Star Trek Into Darkness there’s a scene where the new crewman [crew woman?] on the Enterprise asks Kirk to turn around, and begins to disrobe.

He turns around anyway and she is standing there in her skivvies. She asks him to turn around again.

GORDON: But it was cut from the actual movie, I presume?

Damon Lindelof, the screenwriter, apologized just today via Twitter for the misogynistic scene:

GORDON: Movies are a little more complicated- being collaborative and collective efforts, for the most part, but that’s still interesting

In fact, there was one example that stands out to Evan and I in particular-

EVAN: Tatsuya Ishida is the creator of Sinfest, one of the internet’s longest running consistently-updated comics. He started way back in January of 2000 and has rarely missed a day since then.

While his strip focuses on an ever-growing cast of characters, his fifth ever strip is an example of one of his one-shots. This one is called “Blaxploitation Funk Bible.”

Just this past summer Ishida began a long-running narrative that involved a lot of regret over these past strips, particularly ones that had a somewhat misogynistic bent. A number of his most recent character are staunch feminist children who ride around on trikes, sabotaging the Devil’s works and shaming those who watch pornography, ogle women, etc.

GORDON: I personally never thought his works were all that misogynistic. Heck, the thought probably never even crossed my mind until he brought it up. And right now, he looks like he’s really self-flagellating. 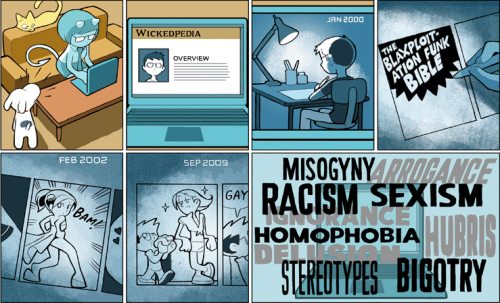 I guess that all brings us to the question of the day:

How’s an artist supposed handle all that? Do you even have the right to take back what you’ve done? If so, how can you address it? Ishida is turning his comic into a scathing self-criticism. Others have attempted to simply ban their own work. Botticelli, as I mentioned, personally burned his own paintings.

EVAN: Well, Ishida is personally working on amending, within his comic’s own narrative, issues of sexual objectification, etc. He’s chosen not to burn his art, but instead fix the issues he observes in his past work.

One of my favourite YouTube musicians, Hannah Trigwell, once had this really goofy cover of 3OH3’s “Starstrukk” that she took off the internet once she started getting really serious about pushing her music career.

This one Muslim artist on DeviantArt who made these funny little comics shut down his account due to embracing his faith and their belief in not portraying living things. He has since brought his account back up, though only to establish that said images are his property. He has since moved on to solely illustrating Arabic calligraphy.

So, again, is their past art worth keeping up, if only to establish where they came from?

GORDON: My gut reaction would be against destroying anything.

You can make the argument that you aren’t that person any longer- that seems more reasonable than attempting to expunge your own art. But what about artists who view their past work as immoral?

I’m having trouble naming any off the top of my head, but I’m pretty sure one of the guys from the nu-metal band Korn [Brian “Head” Welch] had some pretty disparaging thoughts about his own work after he left the band, having converted to Christianity.

EVAN: The kid from Two and a Half Men did the same thing, more or less. He had some very negative comments about the show because he thought it was too crass, et cetera.

But I think I see what you’re saying about people not destroying their past work. To a point, it stands as a testament to where they’ve come from, of the change they’re currently living out.

GORDON: Do artists even have the right to destroy their own work?

I mean, I’m not talking about people campaigning against the values of their old work, I mean people actually trying to get books taken off of shelves.

EVAN: Well, some people obviously can take their work down. It was this DA artist’s prerogative to take down all of his art.

GORDON: So they’re gonna have to just deal with it?

GORDON: Okay, so they don’t have any legal recourse. Speaking esoterically, does an artist ever have that right?

EVAN: Sorry, could you say that again in smaller words?

GORDON: Speaking only in terms of truth and morals and stuff like that- does the artist even have the right to retract or destroy his or her own work?

GORDON: Interesting- why not, and also, why would medium make a difference?

EVAN: Well, in the case of Ms. Trigwell, a YouTube video is easy to take down. I have been searching for a music file of that song for years now and have not been able to find a copy. As far as that song is concerned, it no longer exists.

So obviously there’s how easy it is, but also spread, I suppose? You can’t go around taking books off of shelves either. I’m really unsure about all this, as you can probably tell.

GORDON: I said “esoterically”. The question isn’t “is this feasible”, it’s whether or not someone has the right to do so.

Does Teresa Scott have the moral right to try to get her stuff taken down if she believes it to be immoral or harmful to others? Can you retract your work, or should you have to deal with it’s existence?

EVAN: So the moral, as opposed to legal, right? Yes, I think she does.

EVAN: If we’re talking straight morals, no legal what-have-you, the videos that Scott appeared in feature her face, her acting, as it were. I feel like on some level people should have some ownership of, well, themselves.

GORDON: What about Botticelli throwing his paintings into a bonfire at the behest of an insane Dominican preacher? Those masterpieces were robbed from the world- whether or not the artist hated them, didn’t they belong to us all? Or even if we’re being petty, what about people who disagree that that the work in question is wrong or harmful?

EVAN: “Didn’t they belong to us all” is a really interesting viewpoint.

Does every episode of Two and a Half Men belong to all of us?

GORDON: Audience, please not that I am not claiming ownership over pornography.

But on some level, I’d say yeah- every piece of art, even crass exploitation stuff or campy sci-fi is part of who we are as a culture. On some level, everything- the good, the bad, and the ugly- is part of our heritage.

Personally, I despise most of what we have going, and what I don’t dislike, I either don’t know or don’t particularly care about. But nevertheless, I’d never want it destroyed.

There is a special place in hell for book-burners…

EVAN: As a last floating question, since we really are running out of time, how do we create art without making it publicly owned? I point towards so much of Emily Dickinson’s poetry, which was published without her knowledge after her death.

GORDON: Here’s my take on it:

You don’t have to like a book or a movie or a piece of music. You can combat it with scathing reviews or satire or critiques or parodies or all-out attacks. Heck, we invented Shame Days on our blog for that very purpose. But destroy a piece of work, let alone your own?

You have to deal with the consequences of your actions and the possibility that even if YOU think what you did has no value, others might disagree with you. What we create, good or bad, has intrinsic historical value, and I’ll stand up for that any day. Mein Kampf and Triumph of the Will are vicious, twisted reprehensible works for what they say, but you’d better believe I’d be starting a riot if people tried to take them out of libraries.

Deal with your work, don’t deny it. If you want to do something about an old work you think is wrong or harmful, do what Ishida’s doing and amend it.

Change people’s attitudes about your work, but leave your work itself alone.

EVAN: And, similar to how artists have taken back their art, I’d like to take back the statement I made earlier. Gordon sets it up very nicely why art should remain out in the public sphere, provided that it was first placed there by the artist of their own volition.

Everyone would like people to recant their reprehensible views, but that about-face is so much more powerful when we can see what they turned away from to begin with.

And we are, once again, way over our time limit. Coming up soon is going to be a brief hiatus for E&GT, and Culture War Reporters as a whole, so stay tuned to find out when that happens.

Thanks for reading, and we hope that our discussion added to the discourse on this subject. You can add to it too, obviously. In the comments section.

DO YOU NOT LOVE US ANYMORE?

EVAN: I’m going to try to calm him down, open up another article or something while you still can!

3 responses to “Evan and Gordon Talk: Can Artists Retract Their Work?”