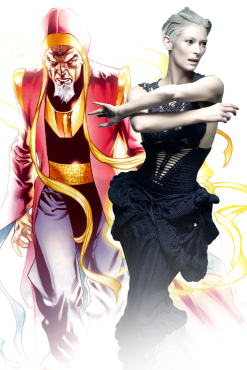 Last week it was announced that Tilda Swinton was in talks to join Marvel Studios’ Doctor Strange, specifically in the role of the Ancient One. For those of you who don’t read a lot of comic books [and even those who do] the character in question is Doctor Strange’s teacher, a Tibetan mystic named Yao. If it wasn’t plainly apparent to you, Swinton is about as Tibetan as Emma Stone is Chinese or Native Hawaiian. The numerous comic book news outlets that I frequent have covered this in as much depth as they possibly can seeing as nothing is set in stone at this point, but I’ve noticed a trend in responses to the presumed casting choice. That perspective is what I’ll be covering first, following that up with how “progressive” Swinton playing this role would actually be-

“Meryl Streep could play Batman and be the right choice.”

Look, we’ve all seen at least one episode of Modern Family, and most of us can remember Cam reciting those exact words when lauding the actor’s ability to be perfect in any role. Like most effective jokes it’s funny because it’s a slight exaggeration of how people actually think and feel, in this case about their favourite talent.

Gordon lambasted the blog “Your Fave Is Problematic” last year, and for reasons that I generally agree with given their penchant of going overboard when finding areas in which celebrities and media have screwed up. That being said, at bare minimum the title of the site is effective in that it forces us to realize that nobody is above reproach. No one is so incredible that they should be given carte blanche to do [or be] whatever they want, yet that’s the attitude I’ve seen so many people give this news.

That’s not to say that people aren’t entitled to their own opinions of who can play what character, but that we’ll so quickly make exceptions when they involve people we love to watch perform. After it was announced that Martin Freeman would be appearing in the Marvel Cinematic Universe the number of people who wanted to see Martin Freeman as Wong opposite Benedict Cumberbatch’s Doctor Strange was staggering. That’s right, Martin Freeman. As a person named “Wong”. 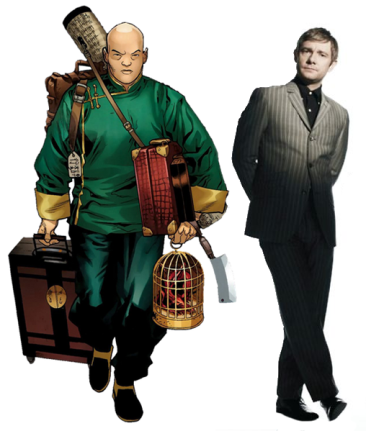 END_OF_DOCUMENT_TOKEN_TO_BE_REPLACED

When I came across two articles on Spinoff Online that were interviews with J.J. Abrams and Alice Eve, respectively, I couldn’t believe my luck. I suppose this all had to do with the fact that Star Trek Into Darkness was released on DVD and Blu-Ray today and they had to keep its title in the news cycle, but I was pumped because they addressed a few . . . criticisms that myself and others had with it.

I’m going to start with the less spoilery one, which was helpfully titled “Alice Eve on ‘Star Trek Into Darkness,’ Carol Marcus & That Controversial Scene.” This was a great way of referring to something that most everyone knew about, and I used a similar method of titling in a post I wrote in June, “The Internet And That One Scene In Star Trek Into Darkness – You Know The One.” If you really don’t know what this is all about I can sum it up like this: Alice Eve’s character, Carol Marcus, was featured in a scene where she was standing in her bra and panties; this did not add to the story and made little sense given the context of the scene.  END_OF_DOCUMENT_TOKEN_TO_BE_REPLACED

There are a few directions I could have gone with in writing about the new Star Trek film that came out almost a month ago. The state of the plot and racism in casting have already been covered in the wittily titled Star Trek Into Dumbness and Whiteness, respectively. No, what I’m going to be writing about is a very specific scene I mentioned in our last E&GT. Here’s an image of the scene in question, in case you’d forgotten:

Before I carry on in highlighting the various opinions around the internet on this, allow me to provide some context. The woman  is Carol Marcus, science officer, played by Alice Eve. She leads Captain James T. Kirk into a shuttle where she proceeds to talk to him about torpedoes. As she does so she asks him to turn around, and then begins stripping. He peeks. She looks at him [pictured above], and once again asks him to turn around. He does. END_OF_DOCUMENT_TOKEN_TO_BE_REPLACED

Evan and Gordon Talk: Can Artists Retract Their Work?

EVAN: So today, due to lack of reader feedback, G-Town and I will be discussing a topic of his own choosing. That is, in his own words, “whether or not an artist can retract his [or her] own work.”

GORDON: It doesn’t happen often, though it’s not altogether uncommon, that we see some artist disparage his or her earlier work.

More often than not, it’s because that earlier work was pretty rough or sloppy- heck, maybe even commercialistic. But we’re not talking about that. We’re talking about what we see once in a blue moon- when an artist actually attacks or her own work as being wrong.

I HATE YOUR PAINTINGS!

END_OF_DOCUMENT_TOKEN_TO_BE_REPLACED

Be Thankful For Your Three Seconds of Star Trek

This is going to be a fairly short post, you guys. I leave for a college reunion in about an hour, and am running a little short on time. Maybe stay tuned for a longer one tonight, though.

If you’ve been reading this blog for a while [and really, who has?] then you probably know how I feel about movie trailers and previews. I was more excited than anything for this year’s The Avengers, but the amount of content they put out before its release was almost enough to rid me of a lot of my excitement for the movie.

On last night’s episode of Conan brought in director J. J. Abrams, and with him a clip from the sequel Star Trek into Darkness. Fans all over America huddled in front of their TVs in anticipation, only to see this:

The clip is all of three frames long.

Understandably viewers were  more than a little disappointed. Honestly, I was as invested in the franchise as the average Trekkie, I imagine I would be too. Abrams lets us know leading up to the teaser that this is a scene where Spock is in a suit of some kind and is also in a volcano. Cue scene, cue outrageous applause from audience.

That might’ve been great for the studio audience, but not so much for people in their homes. Still, it’s good that a 2013 film has the restraint to not start bombarding people with footage.

And speaking of restraint, it seems like that’s what anyone who’s into film needs nowadays. It was my own fault that I found out exactly why the armour Stark wears in Iron Man 3 is the Mark XLVII. Do not look it up, it is a huge, enormous spoiler that will let you know a major plot point, as well as cause you to curse your need to know more and more bitterly.

With the way internet and the media work today, spoilers and leaks abound. It’s up to the viewers who want to preserve their theatre viewing experience to keep a modicum of self-control and not constantly keep checking comic book movie sites [this is more a message to myself than anything else].

What I’m trying to say is, be grateful, Star Trek fans. You have over half a year until Into Darkness comes out. Three seconds should be enough to tide you over for at least another month.