One Christian’s Views on Same-Sex Marriage

To begin with, yes, I am a Christian. I read the Bible and I go to church, and brushing aside such things that can be construed as “appearances only” I also believe that Jesus was God’s only begotten son sent to Earth for the salvation of mankind, and in the inerrancy of Scripture.

I am a Christian and I am okay with same-sex marriage.

Yesterday I had a debate on Facebook that lasted for literally hours on this subject. I was simply going through my newsfeed when an article popped up titled “Inter-Racial Marriage and Same Sex Marriage.” I didn’t even have to open it up to read it to know I disagreed, because the friend who posted it decided to also quote the last paragraph:

“The real question here, it seems to me, is whether marriage has an essence or is merely a social construct akin to driving on the right- versus left-hand side of the road. Those who espouse same-sex marriage want to deconstruct marriage so that what counts as marriage is just a matter of convention. Once we start down that route, anything goes: a man and two women, a man and a child, two men and a goat, etc. I see no reason at all to start down that road.”

Which prompted my response, on the left, and the decision  to embark on a discussion that would last from roughly 1 to 6 p.m. and leave me emotionally, more than mentally, exhausted. I soldiered on, however, because within that paragraph is a very common argument in the Christian community that I simply cannot agree with. It’s a go-to response for many regarding same-sex marriage, and one that follows a particular line of logic.

To sum up their argument very simply:

“If we legalize gay marriage what’s to stop us from allowing pedophilia and bestiality and [deviant sexual act here]?”

What I’m going to do is state the point that I both began and ended my debate with. It’s very straightforward, and should not be difficult to understand. The difference between legalizing same-sex marriage and all of these other things is consent.

One man, of sound mind, decides to enter, of his own volition, into a romantic and sexual relationship with another man, also of sound mind and who likewise wants to take part in this relationship.

To explain why the above differs from pedophilia, necrophilia, and bestiality [the unholy trinity of deviant sexual acts] I defer to a fantastic infographic I found on imgur two years ago: 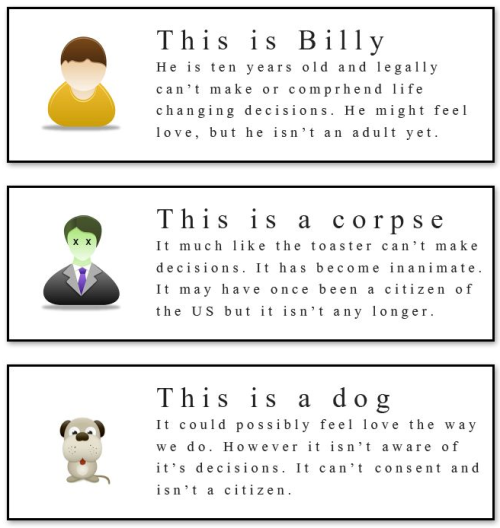 Clicking on the image will link you to the full image.

Again, consent. To address this point an argument was brought up [more than once] that the government could always change the terms of consent, and you know what, that is not something I can disagree with. The government could change how they view consent, but if they do it won’t be because they legalized same-sex marriage. You know how I know this? Because they’re not changing it now.

This doesn’t even flow into the issue of polygamy, which I know some people will bring up, because marriage continues to be between two people. As a legal contract by the government rights and benefits are shared between two people and two people alone. They’re not changing the system in any way except, as I have been saying, that now people can get married to partners of the same sex.

I feel like, in the span of the last few paragraphs, I’ve been hammering this point with a sledgehammer, and I apologize if that’s the case. It’s the exact same point I was trying to make on Facebook, and one I tried to say as many different ways as I could while still being as clear and concise as possible.

What upsets me most is that by comparing homosexuality to pedophilia or bestiality we as Christians simplify what I see as being the most important issue facing the modern church right now. That’s in addition to the fact that doing so is offensive in a way I can’t put into words without breaking my no-profanity rule on this blog. I honestly don’t know if homosexuality will ever be an easy topic for Christians to deal with, not without a drastic shift in exegesis, or interpreting scripture.

I was upset before, and I’m trying not to be now, that the site that hosted the article is called Reasonable Faith. William Lane Craig likens marriage as a social construct to “driving on the right- versus left- hand side of the road” before making that final point I so strongly disagree with. He uses the perfect illustration, though. If same-sex and heterosexual marriage are just like driving on opposite sides of the road then pedophilia is driving on the sidewalk, then bestiality is driving head-on against traffic. To say that one logically leads to the other just doesn’t sound very reasonable to me.

9 responses to “One Christian’s Views on Same-Sex Marriage”