To begin with, I’m not the most unbiased person to be writing about this. “Sk8ter Boi” came out when I was attending a Canadian public school for the first time, and it had a fairly indelible effect on me. My being a fan of Avril Lavigne extended out into high school, and I can still remembering a friend getting me Let Go for my fourteenth birthday. As far as I’m concerned, some of her stuff continues to hold up.

Like most people I liked Under My Skin a fair amount, but wasn’t a huge fan of The Best Damn Thing. Watching the punk-pop star cavort around to the infectious beat felt wrong, like this was some sort of betrayal of who she started as. Of course, people change, and I eventually came around to tracks like “Hot” and “What the Hell”.

Years passed, and eventually she fell off my radar. I noted when she and Deryck Whibley of Sum 41 got a divorce and gawked at her marriage to the widely reviled Chad Kroeger of Nickelback. They recorded a song together and I thought not much of it.

Then I woke up one morning and signed online to a barrage of accusations leveled against her with “racist!” being the common denominator among them. Being fairly invested in this entire thing [as a lapsed Avril Lavigne fan and a person in staunch opposition to racism in any form] I of course had to check out the “Hello Kitty” music video post-haste. I do want to inform you all that I’ve had to watch it several times for the writing of this post and have not enjoyed it once.

Fun fact for anyone who hasn’t been keeping up with this whole debacle: the above video isn’t the original. The music video that was first uploaded to the singer’s YouTube page has since been removed “after being broadly criticized as insipid and, in some cases, offensive.” Thank goodness for fans, I suppose, who took the time to throw up a number of copies to streaming sites everywhere.

The question I should finally be addressing is, as you know, whether or not this is racist. I mean, the internet definitely thinks so. This is just one of a plethora of tweets decrying the artist; it’s also one of the tamer ones by far:

pretty sure avril lavigne is officially a racist

As a very quick aside it’s absurd to me that this is what people everywhere have decided to rally against instead of the fact that the Cleveland Indians and their logo/mascot still exist, or Johnny Depp portrayed a Native American and went about it in exactly the wrong way. But that’s conflating their importance, and we haven’t yet maintained if this is truly awful or not on certain levels [it certainly is for a few of them], so we should get to that.

The first question we should ask is “Why did Avril Lavigne and co. create this?” We don’t have to dig too far at all, as the 29-year-old answered this just yesterday via both Facebook and Twitter-

RACIST??? LOLOLOL!!! I love Japanese culture and I spend half of my time in Japan. I flew to Tokyo to shoot this video…

…specifically for my Japanese fans, WITH my Japanese label, Japanese choreographers AND a Japanese director IN Japan.

Following up on this, the article I linked to above concerning her video being pulled provides a little more information. While she outright maintains that this was created for a Japanese audience as sort of a tribute to one of their subcultures, the fact is that her newest album, Avril Lavigne, “limped to the worst sales figures of her career in North America but still went platinum in Japan.” I’ve been reasonably aware of her fanbase there ever since I read the first few issues of her manga, Avril Lavigne’s Make 5 Wishes.

I’m going to defer to PolicyMic, who titled their post “It’s Almost Impossible to Choose the Most Racist Moment of Avril Lavigne’s New Video” for criticisms to address. Their assertion that she is “oddly popular” in Japan seems unfounded given her catering to that audience, but that aside here’s a paragraph with their biggest complaints, to which I have added numbers:

“It’s up for debate if the most racist moment of the whole thing (1) is when she shouts “Mina saiko arigato,” (2) when she has her dancers (still unsmiling) pose for a photograph and then smile for the first and only time when they see it, or (3) when she giddily claps as she orders sushi from a very severe looking Japanese chef. The whole thing seems to suggest that all Japanese women are as childish as 29-year-old Lavigne.”

I’m going to throw out the first criticism immediately. The Rock section of Rap Genius is excellent in explaining what exactly it means:

According to one Yahoo! Answers contributor, at least, “Minna saikou, arigato!” is a common way for a performer to praise an audience: ‘Thank you, you’ve been a great audience!'”

That seems pretty alright to me. Feel free to disagree with me in the comments. Moving on, there’s the issue of the unsmiling dancers. That I do have some minor issue with. 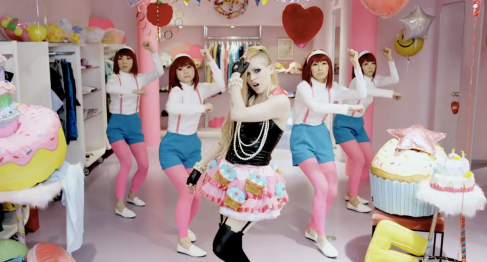 They really do give off a very robotic vibe, which lends some credence to the charge that she is “wearing” Japanese culture. The problem is that this leads into a discussion about backup dancers in general, and I think you would be hard-pressed to find anyone who believes that they have any agency across the board. Backup dancers by definition don’t have a narrative, so why does this context heavily imply their need for one?

I am also throwing out the final accusation that the scene in the sushi restaurant “seems to suggest that all Japanese women are as childish as 29-year-old Lavigne.” As far as I can tell, while she is doing what she can to embody the persona of a Japanese pop star it seems a little excessive to imply that she works as a stand-in for women from that country overall.

Having worked through Policy Mic’s list and finding it wanting, allow me to bring up a post I saw on Tumblr, which will help me segue into talking a little [a lot] about cultural appropriation.

I think the comparison is fair to a point; “stuffing her face with tacos” and “shooting tequila in seedy bars” feel like arguably more negative stereotypes. That being said, it’s always important to find out whether or not changing certain factors renders the end result the same. For example, does this feel like it’s taking advantage of what is pretty clearly American culture-

At what point does it cross the line? I know this bound to bring up cries of “false equivalency!” and y’know what, those have validity. They aren’t the same. I am positive that 2Yoon had no intentions of using this to make it big in the States, which is contrary to what we’ve already established Avril Lavigne was trying to do. Does that somehow make it even worse? The duo is “using” foreign elements to appeal to their domestic [relating to their home country, not homebodies] audience.

Last summer Gordon wrote about cultural appropriation and stated that there’s nothing wrong with taking from other cultures. Instead:

Is this music video exemplifying Japanese culture? Seeing as how it was created by a fair number of Japanese people I think it was meant to be representative of a subculture within the country. The issue being that as literal outsiders [I don’t know how many of you are reading this from Japan] we can’t help but view this as being extremely one-dimensional. Toshi Nakamura of Kotaku East, believes that “Avril Lavigne’s Latest Video isn’t Racist, But It is Disappointing“. In that article he says that “if anything, the video feels like surface-layer self-indulgence of the more stereotypical Japanese image as perceived by a foreigner. Not racist – just shallow.”

“As perceived by a foreigner” works on another level that I mentioned, that being us as a Western audience. If a performer from Africa came and created a music video for North Americans that was founded on certain preconceived [yet accurate] notions we wouldn’t view it as them boiling us down to a single series of images. It’s all contextual, and that’s what we’re really missing here.

It’s still a terrible song, though.