Gaza has been beleaguered since 2007, when Hamas was elected into office. In spite of being dubbed by its supporters as the “only democracy in the region”, Israel nevertheless promptly blockaded the territory by both sea and land, and has since enacted what amounts to nothing less than a siege.

Let me explain what we’re talking about here.

Gazans, if lucky, get electricity for 8 hours of their day, and are unable to import anything without the consent of the Israeli state. Many items have been out-rightly banned for Gazans, such as:

Fishermen have been repeatedly targeted by the Israeli navy, and international attempts to provide Gazans with the humanitarian aid they so desperately need have been met with deadly violence. 2010 saw attacks by Israel on both the Rachel Corrie and the Mavi Marmara– attacks which left nine unarmed activists dead and dozens injured. All for the supreme sin of having attempting to bring help to an imprisoned people.

Of course, this, one of the greatest human rights violations of the 21st century, has been overwhelmingly ignored by those in power, and this isn’t just the result of pressure from lobbies within this country or from right-wing and Christian Zionist groups. This blind support for Israel’s barefaced Bantustan is everywhere in American politics, with even speculated 2016 presidential candidate Hilary Clinton offering unwavering support to the siege.

Bantustan: Look it up.

Gazans are given “warnings” to evacuate, but exactly where are they supposed to evacuate to? With one of the densest populations on the planet, there’s an average of over 10,000 Gazans living in a single square mile. Israel’s “surgical strikes” have all the precision of shooting fish in a barrel. Already, there are 159 reported Palestinian deaths, with over 1,000 injured. You simply can’t equate the pitiful rocket fire from Hamas with this kind of wholesale slaughter.

Heck, even Irsraeli civil rights groups are agreeing that the blockade is nothing but collective punishment on the Palestinians. 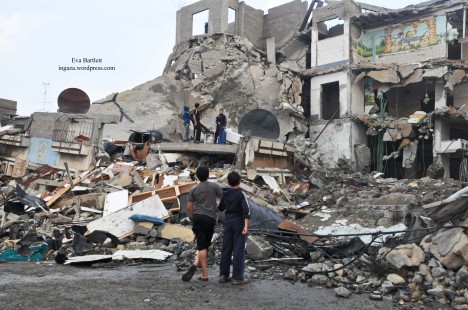 And again, all of this arises from the kidnapping and murder of three Israeli boys hitchhiking in June. Although no Palestinian group claimed responsibility, and no evidence has yet to be produced by the Israeli state, hundreds of Palestinians were arrested and six were killed by the state response. Taking their cue from their own government, a group of settlers kidnapped a 17-year-old Palestinian boy, tortured him, and then burned him alive. How many arrests were made over that?

Now as always, there’s going to be folks, plenty of ’em, who’ll be sanctimoniously lamenting the situation, saying that “both sides are wrong”, and that “We should all just try to get along!”.

I know we try to keep the blog profanity-free, but if this gif offends you more than everything I’ve related so far, you’ve got ****ed up priorities.

There are not always two sides to every issue. Not ever conflict is equally in the wrong. It’s people like this- the smug and the self-congratulatory- who prevent justice from being done in Palestine and countless places around the world. These are the same sniveling, laodicean  cowards who urged “compromise” during the civil war and “patience” during the struggle for civil rights. It’s easy, it’s noncommittal, and it’s killing people.

The lines could not be more clearly drawn people.

You’ve been given the facts- do something about ’em.

10 responses to “The Siege of Gaza”