Pro-Israel vs Pro-Palestine: Can There Be a Third Option?

About a year ago I wrote a paper on media bias in coverage of the Israel-Palestine conflict. In her feedback, my professor accused me of being a Palestinian sympathizer and in the same breath called me pro-Israel. This conversation, in my mind, highlights the fact that no matter how careful I am, neutrality on this issue has become nearly impossible.

Let’s face it, no one wants to talk about the Israel-Palestine conflict. No matter what stance you take, you’re going to offend someone. Since violence and tensions have somewhat lessened since last year, or at least have become overrun by other more flashy news stories, there hasn’t been a whole lot of coverage on the conflict. Though governments may be in a constant process of peace talks and negotiation the situation for most Israeli and Palestinian citizens remains unchanged.

About three years ago I spent some time living in both Israel and the West Bank. As a writer and photographer I naturally blogged about my experience, and the response I got was both shocking and highly predictable. This conflict touches on so many aspects of history and culture that it has become absolutely polarizing on the fronts of ethnicity and religion. Like the situation with my professor I managed to piss off people on both sides as I desperately clung to what I liked to think was middle ground, searching for a “pro-peace” option.

END_OF_DOCUMENT_TOKEN_TO_BE_REPLACED

Expanding the Golden Rule (Are We Taking Animals “Foie Gras-ted?”)

I don’t eat liver.  Doesn’t matter what animal it came from, it is literally the body’s filter, and I’m not putting that in my mouth.  Unsurprisingly, a large portion of humanity does not share my distaste for consuming fleshy contaminant processors.  Take foie gras, for example.  It’s a special kind of gross, prepared organ, which Wikipedia describes as “the liver of a duck or goose that has been specially fattened.”  Thing is, “specially fattened” is a euphemism for “force fed with a metal tube.”

This was brought to my attention recently, as a student from my school was recently arrested for secretly recording video from inside a foie gras farm, and, allegedly, stealing some ducks.  She’s facing up to seven years in prison for this.

Now, I am a meat eater.  I love meat, hell, I evolved to eat meat, as did the rest of you (assuming all of our dear readers are human).  That being said, I don’t like meaty foods that require inhumane treatment of the animal that material’s coming from.  It’s why I don’t touch veal.  I think an animal should get to live its life like an animal, with its own kind, moving around, eating, sleeping, having sex… If the meal in question requires that an animal be pumped full of chemicals and locked in a box to restrict its movement to keep it tender, I will have none of that.

In general, the issue of “animal rights” is a tricky one, for a variety of reasons.  Mainly, because our use of animals is almost ubiquitous across every area of our lives.  We eat their meat, we ride on their backs, we drink their milk, we feed them to our other animal friends…  It’s hard to step back and reconsider something so inextricably incorporated into our lives.  And of course, there are other things that make the topic a sour one for many… 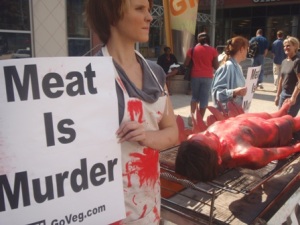 END_OF_DOCUMENT_TOKEN_TO_BE_REPLACED

UN Officials report having warned Israel “17 times” that the school was housing refugees and children.

I’m writing this after one of the deadliest days in the recent bombing of Gaza. As of right now, estimates place the Palestinian death toll for the past 24 hours as being over 100, with many lost after the IDF (“Israel Defense Force”) bombed a UN school-turned-refugee shelter. With the total death count standing at 1,336, it can be tough in such times to feel that there’s any hope- but readers, there is a way to fight back.

END_OF_DOCUMENT_TOKEN_TO_BE_REPLACED

In one of my early posts on the blog I shared about a fundraiser I organized with one of my best friends. The two of us had both stumbled across the shocking reality of human trafficking and been horrified. Most of my experience was just through reading about it (primarily in Benjamin Perrin’s book Invisible Chains), whereas she had met human trafficking survivors while attending Salvation Army War College.

We felt frustrated, and helpless, but we wanted to do something, anything to prevent it from happening to more vulnerable individuals.

After discussing it a few times, we decided to create some kind of event where we could raise awareness for human trafficking here in Canada. We even created a petition that advocated for the “Nordic Model” of prostitution law. This model was advocated by Perrin in his book and basically entails attacking the demand side of prostitution rather than the supply, specifically by making the purchase of sex illegal, rather than the sale. In theory, this means that the individuals who are victimized by the sex industry would be protected, while those who are perpetuating human trafficking  or contributing to the prostitution demand would be punished.

So I should be really excited now that Canada is currently debating a bill that would change our current prostitution laws to something much more in line with the Nordic Model, right?

Well, I’m suddenly not so sure.

Bill C-36 was introduced by Justice Minister Peter McKay near the beginning of June. END_OF_DOCUMENT_TOKEN_TO_BE_REPLACED